Despite its complex challenges, the Iranian military’s planned divestment from the economy holds the potential for more transparency and accountability. 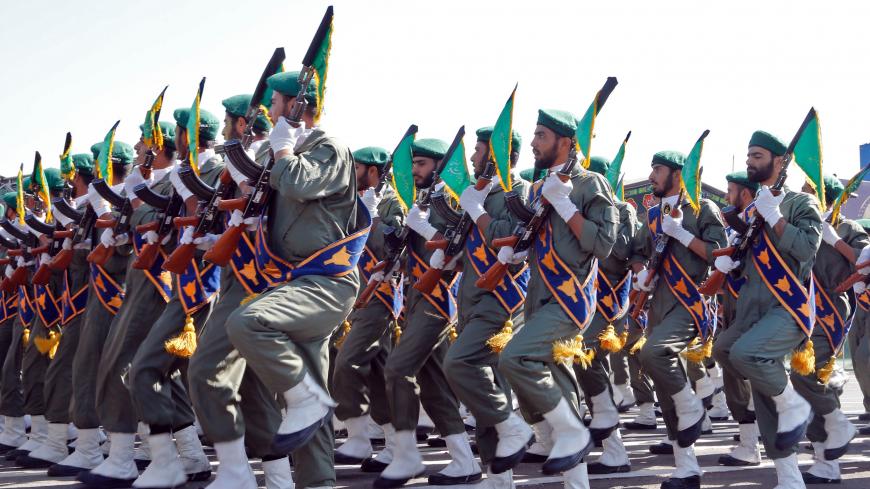 Iranian soldiers march during the annual military parade, marking the anniversary of the outbreak of the war with Iraq, Tehran, Iran, Sept. 22, 2017. - STR/AFP/Getty Images

A significant recent development in Iran’s attempts to liberalize the country’s investment climate was the announcement by Defense Minister Ali Hatami that military organizations have been tasked by Supreme Leader Ayatollah Ali Khamenei to divest from "nonrelated" economic activities. Al-Monitor recently discussed the implications of this instruction, especially the fact that it will be difficult to find buyers who are prepared to invest in assets that have been controlled by military organizations over the past two decades. In this article, we will look at the entities at the core of this process and try to figure out what scenarios could emerge over the next few years, especially how the ownership structures could change.

Focusing on the military owned enterprises in Iran and the assumed process of divestment, there will be two core questions: What can be described as “nonrelated” activity, and which owners within the military sector would be compelled to divest their assets. There is a lot of ambiguity on both levels.

In the past, Islamic Revolutionary Guard Corps (IRGC) principals have defended the expansion of their economic activities underlining that they entered economic fields that were too challenging for the private sector with the intention to help the government and improve economic conditions. Consequently, one can anticipate a long debate about which assets are nonrelated. To an unbiased observer, nonrelated should mean economic activities that are not related to the core tasks of military organizations, i.e., outside the scope of arms manufacturing and potentially construction.

Even construction is one of those sectors where the presence of IRGC-related companies has distorted the market and worked against the interest of the private sector. However, when it comes to a sector such as telecommunications, where IRGC-related companies are in a dominant position, there will be debates whether the sector is related to the military branch or not. Some elements within the IRGC will argue that the IRGC’s intelligence responsibilities would compel the organization to keep watch over telecommunications activities. Others will argue that the ownership will have to be transferred to nonmilitary entities and that the supervisory intelligence role would have to be conducted at the regulatory levels rather than owning various businesses. There will clearly be some sectors where a quick road map should be drafted to sell off the assets of the military organizations, including banking and finance, automotive, trading, oil, gas and petrochemicals. Such a divestment process will also reduce the sanctions risks for international investors who are planning to enter these sectors.

The most visible entity in the second category is Bonyad-e Taavon-e Sepaah (IRGC Cooperatives Foundation), a cooperative owned by IRGC commanders and members. This cooperative owns large segments of what are considered IRGC assets, such as the shares in Mobin Telecom, one of the biggest players in the country’s telecom market. It is conceivable that from a legal point of view it will be argued that Bonyad-e Taavon-e Sepaah would not be obliged to sell off its assets as it is not owned by military institutions. There are similar foundations for the regular army and the law enforcement forces (the police), and all of them are owned by “individuals” and not by institutions.

The third category is similar where one can identify the Armed Forces Social Welfare Investment Organization (SATA) — an entity owned by the pensioners and active members of all military organizations in the country and fully controlled by the Ministry of Defense. The range of investments by SATA are very wide, and there are few economic sectors where one does not find the footprint of SATA whose investments are conducted by its investment arm known as Shastan (not to be confused with Shasta, which is the investment arm of the Social Welfare Investment Organization). According to its articles of association, Shastan’s objective is to recommend investments to SATA in a manner “to improve the financial capability of its members and pensioners.”

One can see the legal complications that emerge from the existing ambiguities. It is almost certain that SATA would not be asked to divest any of its assets as it has to persist as a pension fund and provide for the future pensioners of the armed forces. Furthermore, the various foundations are clearly in the gray area, and it can be argued that they are similar to SATA as they are owned by individuals rather than institutions. Fact is that most of the nonrelated assets owned by military organizations are owned by the above two categories.

Looking at the entities owned by the military institutions directly, the famous conglomerate Khatam Ol-Anbia (KOA) is one of the so-called operations headquarters of and an integral part of the IRGC. At the same time, it is one of the key players in the field of pipeline construction in Iran — evidently a nonrelated sector. Now the question is whether this process will mean that KOA will withdraw from that business. If yes, who would buy a business that has mainly relied on military resources — financial, technical and manpower? Similar questions can be asked about many mining and construction segments in various military units that have been developed in the past two decades. Even if those entities decide to discontinue those activities, there will be the question of what will happen to the hardware and personnel capacities that have been generated in the past. Will there be any buyers for those assets?

An easy approach would be to transfer some of those assets to the cooperatives or to the network of companies owned by SATA. Another approach would be to sell some of these assets back to the state or to the various religious and revolutionary foundations. Whatever emerges, the real private sector will not opt to buy these assets, and as long as they remain in the realm of state and semi-state institutions, they will have the same damaging effect on the development of the real private sector.

Nonetheless, there will be two important upsides: In the process of shifting ownerships, even if some assets move from the military institutions to SATA and semi-state foundations, there would be a greater degree of transparency about ownership and a lower sanctions risk for targeted companies. In addition, one can expect the military institutions themselves to become more accountable. In the words of one Iranian website, one of the main advantages of shifting economic activity away from military organizations is the expectation that these organizations will not waste state resources with the excuse that they had generated the revenues themselves.