Iran’s economy and business community are in transition, creating both risks and opportunities for international investors. 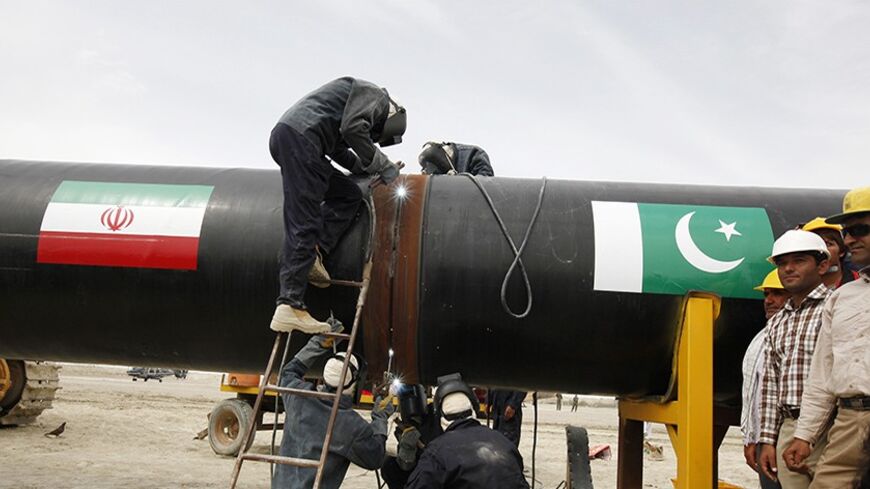 Iranian workers weld the pipeline during a groundbreaking ceremony to mark the inauguration of the Iran-Pakistan gas pipeline, in the city of Chahbahar in southeastern Iran, March 11, 2013. - REUTERS/Mian Khursheed

Amid the implementation of the Joint Plan of Actions between Iran and the so-called P5+1 (five permanent members of the UN Security Council and Germany) and the consequent sanctions relief, international companies that are interested in re-engaging the Iranian market are faced with an important reality: In the past decade, Iran’s business community has transformed from being one dominated by public companies to one where semi-state institutions (revolutionary and religious foundations, pension funds as well as military organizations) play the most significant role. In addition, in terms of type and volume of activity, the private sector has reached new heights, especially the companies that have successfully engaged in export business.

International observers have focused on the growth of semi-governmental organizations and have wrongly concluded that the Iranian economy is now dominated by the Islamic Revolutionary Guard Corps (IRGC). However, the IRGC-related companies are only one of many categories of institutions that operate in the gray zone between the public and private sectors, since they are not accountable to the government per se. Obviously, they cannot be considered private, because they are affiliated with state institutions such as the Supreme Leader’s Office, religious authorities or military entities. Such institutions have mainly increased their economic role during the absence of international companies in the Iranian market. However, now that the government is trying to attract international investors, the semi-state sector will continue to operate as an integral part of the business community.

Evidently, Iran’s genuine private sector is in a very challenging position. In many industries, lucrative opportunities have been available predominantly to the semi-state companies. Even if some contracts were won by the private sector, there were operational issues and obstacles, sometimes due to the non-competitive climate generated by the same semi-state entities. Though the new government is trying to provide a larger space for the operation of private entities, semi-state institutions will remain an inevitable player, especially in large projects. Essentially, all key players appreciate that the semi-state sector plays an important role and that the private sector has to deal and also partner with them on a regular basis. In such partnership scenarios, private sector firms benefit from the very extensive business network available to semi-state institutions, which can be considered an asset in the implementation of major projects. Private sector players also realize that such entities have an easier access to state privileges, from funding to the ability to import needed goods and services. On the other side, such partnerships help semi-state companies develop new capabilities in their portfolio. Consequently, there are a growing number of project-based partnerships between the semi-state sector and private businesses in the country.

Parallel to the growth of both semi-state and private sectors, the government’s role in the economy has shrunk and will shrink further as a consequence of privatization. The government will continue to control strategic sectors such as upstream oil and gas, but over time the role of government technocrats has reduced in the business elite.

What does this all mean from the perspective of international investors?

Evidently, there are potential risks in dealing with semi-governmental entities some of which are included in the various UN, US and EU blacklists related to sanctions dealing with the Iranian nuclear program. An international company re-engaging Iran may suddenly be faced with a new owner of a formerly state-owned company — in other words, an existing client may move from being government-owned to being the subsidiary of one of the semi-governmental organizations. Similarly, an existing subcontractor and/or a project partner could suddenly go from being a state-owned company to being owned by semi-state institutions. Furthermore, a sector or an industry may be influenced by the shifting ownership or a shifting strategy, e.g., the dominance of semi-state institutions in the telecom industry has moved the sector more toward domestic capacity-building as opposed to cooperation with international firms.

In any of the above shifts or scenarios, the foreign company could face the risk of suddenly being affiliated with an entity that is subject to sanctions. Even without the threat of sanctions, the change in ownership could have altered the strategic orientation of the targeted company. In fact, many of Iran’s large holding companies have institutional affiliations and a new ownership structure could potentially change the outlook of that specific entity. Such shifts would need to be fully understood by the international players. In addition, even if the foreign company targets partnerships in the private sector, it may indirectly be affiliated with such semi-state institutions through project-based partnerships.

Despite these risks, there are also some opportunities in the new composition of the business community. Iranian private-sector enterprises have become more international and more competent over the years and they should not be viewed as simple commodity importers anymore. On the other hand, though the underlying values and principles of semi-state institutions are not much different from the government, there are some new characteristics that international businesses should take into account: Clearly, the changing ownership has altered the networks that rely intensely on their direct or indirect affiliation with the IRGC or revolutionary foundations. Furthermore, the new semi-state networks have a stronger tendency toward revolutionary ideals such as self-sufficiency, domestic capacity building, etc. In addition, many of the new business leaders in Iran (including genuine private sector entrepreneurs) are former military commanders whose mindset is more influenced by their experiences in the Iran-Iraq war, i.e., a deep mistrust in Western values and intentions and a desire to fully control any business or industrial process. As such, relationship-building with these former commanders is more challenging compared to working with government officials. On a positive note, the new organizations, especially those affiliated with military entities, are much more inclined toward a disciplined and modern approach to management. As opposed to the traditional setting where values such as age, experience and traditional hierarchy were dominant, in the new setting a military-style and pragmatic approach to management is prevalent. At the end of the day, these entities are more commercially oriented and less political.

In interacting with such Iranian partners for a specific project or joint investment, the foreign company should consider the differences in perceptions and organizational culture. While sanctions compliance has to be an issue, one should not automatically keep a strategic distance or dismiss all semi-state institutions. In some sectors, international players will have no choice but to work with such entities. There are also enough success stories in cooperation between the semi-state sector and international companies including the local production of Coca-Cola. Similar to established public or private sector managers, the new business elite appreciates the value of technology and know-how; however, it has a greater tendency toward domestic capacity-building, though some former military commanders tend to be overconfident in what they can achieve on their own.

All in all, Iran’s business landscape has changed and international companies need to be aware of the changes and their implications that can both generate opportunities as well as risks.