A change of management at the Iran Privatization Organization is the reason for a new focus geared to improved productivity and efficiency. 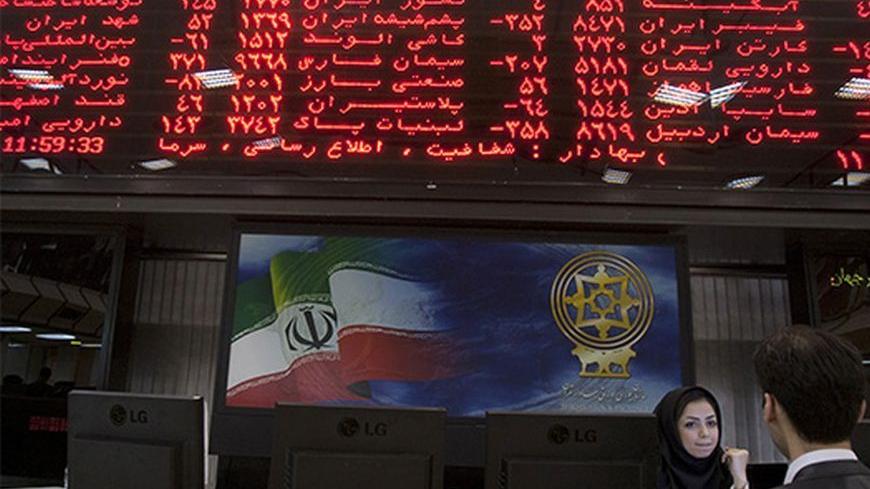 A trader speaks with a stock market official beneath the electronic board at the Tehran stock exchange, Sept. 15, 2010. - REUTERS/Caren Firouz

Privatization has been on the Iranian government’s agenda ever since the early 1990s, but it has suffered as a result of politicized approaches under different governments. News has emerged that the new administration will slow down the privatization pace, which may be a positive step if it returns the campaign to its original goals.

The main objectives of Iran’s privatization program which were defined in various five-year development plans included a restructuring of the Iranian economy, especially reducing the government’s role and promoting the private sector’s role in economic activity; generating revenue for the government and reducing the financial burden of state companies on the country’s budget; and increasing productivity levels in large enterprises.

Initially, one major obstacle was the strict interpretation of Article 44 of the Iranian Constitution, which calls for all major industries to be owned and dominated by the government. However, a reinterpretation of that article in the mid-2000s, with an eventual decree signed by Supreme Leader Ayatollah Ali Khamenei in 2006, paved the way for the government to withdraw from most sector activities. In fact, this reinterpretation allowed private sector participation not just in light industries, but in all major industries including downstream oil and gas and large mines (excluding upstream oil and gas). The original idea was that the government would keep a 20% share block in all privatized companies, but would sell 80% of the shares to nongovernmental entities.

However, former President Mahmoud Ahmadinejad twisted the program based on his populist agenda by introducing so-called “justice shares,” that is, shares of public entities that were transferred to vulnerable social classes. Consequently, the government ended up controlling two significant share blocks in any privatized company, that is, 20% based on the actual privatization law and another 20% as the caretaker of “justice shares.” In other words, two out of five board seats were controlled by the government — a fact that compelled the private sector to stay away from such companies.

In addition, Ahmadinejad insisted that the government should promote the “cooperative sector” in the course of privatization, which translated into the transfer of many shares to newly founded cooperatives. It is now known that those cooperatives were fronts for the former administration’s own networks of interest, which were organized in a web of cooperatives and investment companies. Consequently, only few private sector players were even considered for actual privatization cases.

Iran’s genuine private sector was already aware that lucrative opportunities were solely available to semi-governmental entities such as pension funds, revolutionary and religious cooperatives and so on, and to the favored network of businesses around the government. Consequently, the role of the private sector has been marginal in the process. This also explains why the net effect of privatization has not led to major efficiency and productivity gains in Iranian companies. However, it should be noted that the private sector also benefited through establishing new private entities as opposed to acquiring privatized companies. Nonetheless, the dominance of semi-governmental organizations meant that very few sectors offered a genuinely competitive environment for private sector activity.

Obviously, many stakeholders are waiting to see what kind of approach the new administration will adopt toward privatization. After all, this is the government that wants to promote the private sector to create jobs and fuel economic growth. The first indication in this regard could be detected from the budget amendment for the current Iranian year. Interestingly, in this bill President Hassan Rouhani's government reduced the planned proceeds from privatization from originally 37,000 billion Iranian rial [$1.5 billion] to 7,000 billion Iranian rial [$281.5 million], signaling that a large number of planned privatization cases will either be canceled or delayed.

One reason for the targeted reduction is the extensive change of management and staff in the Iran Privatization Organization (IPO) — the office in charge of privatization. Pouri Hosseini was appointed as the new managing director by the minister of finance and economic affairs. However, according to Hamid-Reza Fouladgar, head of the privatization committee in the Iranian government, some of the planned privatization cases “especially in the Ministry of Energy (Power)” have been removed from the IPO agenda. Fouladgar believes that the new government will revise the list of companies to be privatized.

Fouladgar’s comment about the previous government’s performance is also telling: “The Ahmadinejad administration took appropriate steps in drafting regulations and creating structures for privatization; however, in implementing the planned policies, there were many illogical transfers of ownership.”

Analysts agree that a revision of privatization practices of the past few years would be a positive step. Leading economist Farshad Momeni has commented on the issue in an op-ed in the Shargh daily newspaper, where he argues that Iran’s privatization program was distorted from day one and it never led to a restructuring of the economy to promote the private sector.

Assadollah Asgaroladi, a leading businessman, describes the privatization performance in the Ahmadinejad era as a “farce” and believes that the economy’s resources are not at the disposal of the real private sector.

There are also voices in the petrochemical sector who believe that privatization has undermined this sector’s performance. Mohammad Payvandi, an official in the Ministry of Petroleum in charge of petrochemical companies stated: “The privatization in the petrochemical industry was problematic from the start, because there was no strategy on who would be in charge of developing the industry as a whole.” He and others argue that it has been a mistake to transfer large share blocks to pension funds which had no idea on how to manage such large enterprises.

With all the critiques coming from experts, private sector players and even government officials, it is clear that a new approach to this important economic process would be needed. Incidentally, government officials are also aware of the shortcomings. On Oct. 2, Ali Teyebnia, minister of finance and economic affairs, stated during the inauguration ceremony of the new IPO managing director: “Unfortunately, the objectives of privatization, that is, increased efficiency, productivity and a more competitive business environment have not been achieved.” He confirmed that his ministry will revise the related laws and regulations and underlined that the authorities will have greater oversight and also will evaluate the companies more carefully before any decision.

While the above revision is perceived positively by private sector stakeholders, the core issue has not been resolved. In fact, one of the key drivers of transfers of ownership from the government to various pension funds and foundations has been the government’s huge debt to these entities. In other words, governmental companies are transferred to the semi-governmental sector as a debt repayment mechanism and not as a logical process of privatization. Consequently, as long as government finances are distressed, such ownership transfers will take place, which will over time empower the mentioned semi-governmental organizations — especially pension funds — that can decide the fate of various companies and their employees.

A positive indication at this stage may be that since the change of government, the IPO has not issued any new lists of companies up for privatization. It could be a sign that the process of evaluation is being redefined in line with the minister’s comments. In any case, future privatization steps will need to focus more on the economic goals of this program, that is, promoting the real private sector by improving competitive structures and increasing efficiency and productivity rates. There is no doubt that a continued empowerment of semi-state institutions will not achieve these goals and will further irritate the country’s economy.