The real footprint of the IRGC in Iran's economy

Given the important footprint of the IRGC in the Iranian economy, the Rouhani administration appears to be confronting the Guards by co-opting them. 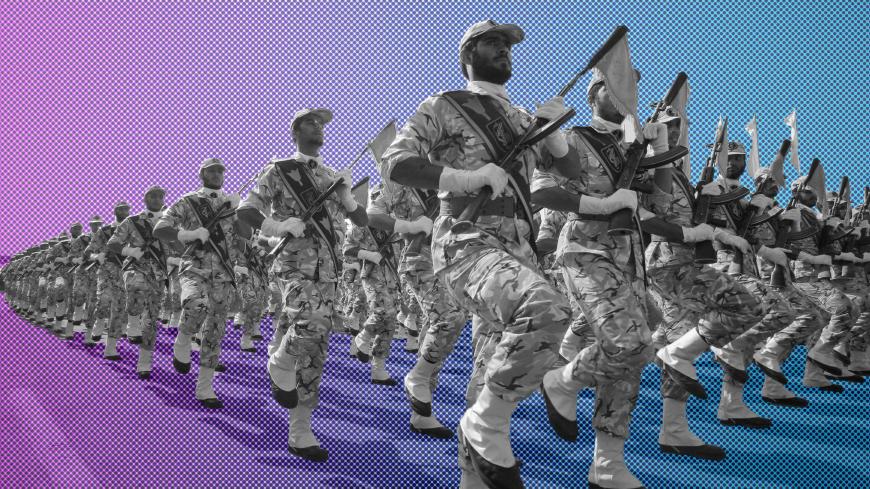 Members of the Islamic Revolutionary Guard Corps march during a parade to commemorate the anniversary of the Iran-Iraq War (1980-88), in Tehran, Iran, Sept. 22, 2011. - REUTERS/Stringer/

The Iranian economy consists of three distinct sectors: public, private and semi-state — which includes religious, revolutionary, military foundations and cooperatives, as well as social security and pension funds. Experts agree that as a result of flawed privatization processes in the past three decades, the ownership of top governmental enterprises has been transferred to the semi-state sector. Consequently, gradually the semi-state sector has become the largest constituency in the country’s economy. One of the players in this semi-state sector is the network of companies around the Islamic Revolutionary Guard Corps (IRGC), whose role in the economy is usually subject to guessing games by all types of commentators.

The IRGC entered economic activity beyond its military tasks in the aftermath of the 1980-88 Iran-Iraq War. Former IRGC Commander in Chief Mohsen Rezaei recounts that in 1989, then-President Akbar Hashemi Rafsanjani asked the IRGC to shift its capabilities toward the country’s reconstruction. Key political stakeholders welcomed this process during the reconstruction phase. Limitations of the growth of the IRGC in the country’s economy became evident when IRGC-affiliated companies started to bully their way into government projects during the era of President Mohammad Khatami (1997-2005). The most visible cases of friction were the cancellation of the Turkcell mobile license in 2004 and also the cancellation of the Imam Khomeini International Airport security contract with the Turkish company TAV in 2005. Both these contracts were later awarded to IRGC-affiliated consortia. The reluctance in the Khatami era to allow the IRGC to enter strategic sectors such as petroleum was followed by the era of President Mahmoud Ahmadinejad (2005-2013) when all key sectors were opened to IRGC interests, up to the point that Rostam Qassemi, head of Khatam-ol-Anbia industrial conglomerate, became petroleum minister.

IRGC principals have justified the expansion of their economic activities throughout the past two decades by claiming that the IRGC would enter economic fields that are too challenging for the private sector with the intention to help the government and improve economic conditions. Notwithstanding, from the perspective of the private sector, the above justification could only explain the IRGC’s presence in construction and heavy industries, not in entering sectors such as banking, insurance, trading, food and telecommunications. Incidentally, the IRGC network even owns football clubs and hotels. A closer look at the list of companies that are affiliated with the IRGC and the so-called Bonyad Taavon Sepah (BTS, a foundation owned and managed by IRGC commanders) indicates that IRGC-affiliated entities have now entered every possible branch of the economy.

While IRGC principals have always proclaimed support for the government, the relationship between the administration and the IRGC has not been an easy one. In 2013, President Hassan Rouhani asked the IRGC to cut back on its economic activities in order to create more space for the private sector. Furthermore, various studies on the country’s business climate have shown that the private sector feels limited through the presence of semi-state companies. It is not a secret that the access of semi-state actors to projects, funds and political stakeholders generates a competitive environment unfavorable to the private sector. Private players also complain that the footprint of IRGC companies undermines the potential for a greater presence of international companies in the Iranian economy; this is partly caused by the continued blacklisting of many IRGC companies by Western governments, but it is also due to different attitudes among the main players. In fact, private sector companies look for a strategic partnership with foreign entities, whereas many in the semi-state sector, especially IRGC companies, look for tactical cooperation in one project or for a limited time. Appreciating the fact that the private sector will play a key role in job creation, the negative impact of the semi-state sector on business climate needs to be addressed.

It is evident that a growing segment of the Iranian economy is comprised of semi-state enterprises, especially IRGC-affiliated companies. The question is how much of the Iranian economy is actually controlled by the IRGC. Al-Monitor recently discussed the composition of the Iranian private sector, but the ambiguity of ownership makes it impossible to state how much of these entities are genuinely private and what percentage is owned by the semi-state entities, especially the IRGC. There are also no official statistics to show the composition of the ownership structures in the Iranian economy or their contribution to the GDP. Each of the major semi-state players, including the IRGC and BTS, have created a web of cross ownerships in various companies that makes it almost impossible to calculate the various shares of each sector.

The author has used an analysis of the Iranian economy based on the available value of each economic sector and an estimated share of each of the three sectors to gauge an estimated share of each of the three groups. Based on these calculations, the public sector contributes 35% to the Iranian GDP, the private sector about 25% and the semi-state sector approximately 40%. As mentioned, the semi-state sector includes a host of religious and revolutionary foundations, social security and pension funds as well as military organizations. The IRGC network is the largest component of the military entities, which also include the social security and pension fund of the armed forces and is known as the SATA. Therefore, in terms of share of the GDP, the estimated share of the network around the IRGC is about 15%, with a growing trend.

This growing trend is mainly a result of new investments and initiatives by the IRGC network and only partly due to the transfer of governmental entities to the IRGC. In fact, according to Hamid Reza Fouladgar, head of the parliamentary commission supervising the privatization process, the IRGC’s share of the privatized entities was less than 10%. Fouladgar also commented that in the fields of subcontracting and major projects, the governments insist on the presence of IRGC-affiliated companies. The latter statement seems to be accurate. In other words, IRGC companies play a significant role in infrastructure projects such as road, rail and dam construction. A recent statement by IRGC spokesperson Ramezan Sharif that the government debt to Khatam-ol-Anbia stood at 200 trillion rials seems to confirm that the Rouhani government also awarded many projects to the IRGC network. The fact is that construction and heavy industrial activities were in line with the IRGC’s capabilities that were created during the war and reconstruction eras. Problems emerged when the IRGC pushed into industries far from their core capabilities and hence undermined the country’s development by distorting the competitive environment and mismanaging projects — such as major petroleum projects.

Whatever one thinks about the IRGC, it has become an integral part of the Iranian economy. What the government can work toward is to make the semi-state entities more accountable and to shape the business climate in a way that the private sector is not hampered in its work. In line with this ambition, recently the Rouhani government and IRGC principals agreed that the conglomerate of Khatam-ol-Anbia only takes on projects that private sector contractors cannot afford, i.e., mega projects worth more than 2 trillion rials. While many other steps will be needed, this is a positive initiative in opening some space for the genuine private sector, provided that similar agreements are achieved with the other semi-state players.