Nuclear deal or no deal, Iranian conservatives who have anxiously been losing ground now face further isolation by President Hassan Rouhani's reforms and will redouble their political efforts. 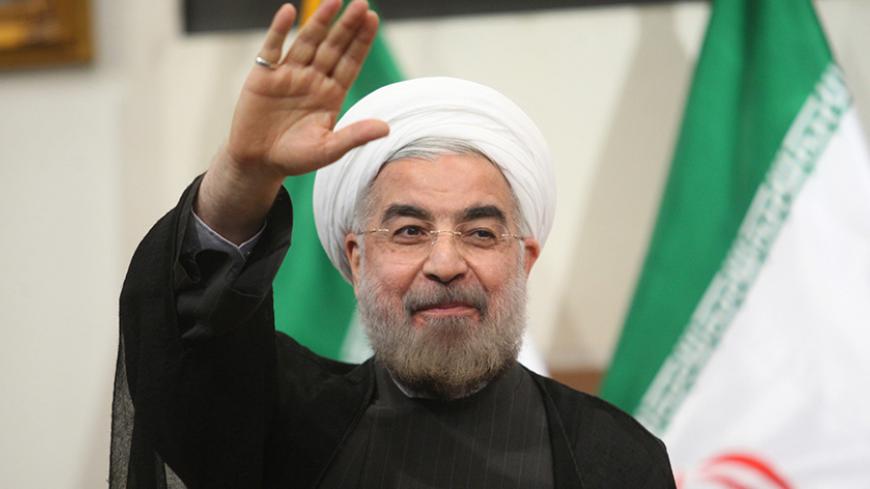 With a final nuclear deal with six world powers at hand, Iranian President Hassan Rouhani has ordered his administration to start planning to attract foreign direct investment. He has also urged domestic enterprises to grab the “unprecedented opportunity” to strengthen the manufacturing and exports markets, a policy that authorities hope will lead to accelerating economic growth — as high as 8% per year — by 2021.

Among the myriad Iranian political actors, the moderate president is the major short-term winner of the "best" feasible settlement to the nuclear row. In his 2013 campaign, Rouhani promised to curb galloping inflation that exceeded 40% in October 2013, resolve the nuclear standoff that was pushing the country toward war, and lift the crippling economic sanctions that intensified between 2010 and 2012. He has now met these promises and is not shy about making it clear.

Rouhani's latest achievement will make him more popular at home and provide him with stronger leverage for political bargaining with stubborn rivals — the main losers, politically speaking, of the landmark deal.

Aware of the possible consequences of Rouhani’s success, ultraconservatives have started questioning, criticizing and sabotaging the administration's foreign policy achievements, which they fear will become an effective tool in the hands of the moderates to mobilize public opinion ahead of key upcoming elections.

Less than a week after the deal was struck, Commander of the Islamic Revolutionary Guards Corps Maj. Gen. Mohammad Ali Jafari objected to some aspects of the agreement, saying it crossed some “red lines” concerning Iranian defenses. Elements of the paramilitary Basij have lashed out at the deal on social networks. Moderate conservatives, however, seem to have avoided publicly commenting on the issue. Given Supreme Leader Ayatollah Ali Khamenei’s endorsement of the outcome of the nuclear negotiations, they may be considering other ways to contain Rouhani.

"Only military figures or those close to military circles have mainly been critics of the deal so far," a political journalist in Tehran, who asked not to be named, told Al-Monitor.

Indeed, the harsh — but apparently finely calibrated — objections to the nuclear agreement seem to be aimed more at pressuring Rouhani than at the deal itself. This is not surprising as the accord will — economically speaking — bring benefits for virtually every group and faction. The agreement has averted possible war and could bring billions of dollars in foreign investment into the struggling economy, which is largely in the hands of conservative actors.

Indeed, it appears that pressure on the Rouhani administration from rival groups will persist as long as moderates, who have obvious links with radical Reformists, are in power. However, this pressure is set to intensify in the next several months. Key elections are coming up in February, including for parliament, a significant stronghold for ultraconservatives who have anxiously been losing ground. The president and his allies need to seize enough seats in the conservative-controlled Majles or face significant challenges to his expected 2017 bid for re-election.

Despite the fact that the Guardian Council — the body in charge of vetting and eliminating “extreme” candidates — is in the hands of Rouhani's critics, the president’s rivals are unlikely to be able to reject the candidacies of low-profile Reformists. But hard-liners will certainly not let their moderate foes take control of the Assembly of Experts, whose members will also be elected in February. Among its other duties, the Assembly supervises the performance of the Supreme Leader and technically has the authority to depose him.

In the long run, ultraconservatives fear that the likely expansion of the middle class will pave the way for the Reformists to re-emerge — a red line frequently discussed among senior hard-line figures.

Should sanctions be removed in a matter of months, the president and his pro-reform supporters will gain momentum, spreading their influence further into Iran’s youthful society, which is enthusiastically seeking connections with the outside world, free of restrictions.

Ebrahim Asgharzadeh, a prominent Reformist activist who served as a member of parliament between 1989 and 1993, expects the nuclear agreement to have a grave impact on Iranian society. As the middle class is expected to balloon over the next several years, Rouhani will have to push through further political and economic reforms — a move that could lead to competitive elections and isolation of extreme right-wing forces, Asgharzadeh argues.

As the parliamentary elections approach, conservatives will try to find alternative solutions to drive the administration back and compensate for their loss in the battle over the nuclear deal. Though the agreement is yet to be confirmed by the US Congress, it has already raised public expectations in Iran, making it very costly for any political group to reject the accord.

While Rouhani seems en route to decisively win the nuclear battle, it won’t be his last. If the deal is implemented, ultraconservative forces may start maneuvering against the president by focusing on economic and cultural issues. In this vein, Rouhani’s rivals are highly likely to seek to undermine him by targeting the Ministries of Economic Affairs and Finance, Roads and Urban Development, as well as Culture and Islamic Guidance. They have already started challenging the Rouhani administration over the extent of Iran's assets frozen overseas. Moreover, delays in the national public housing project have led some conservative lawmakers to call for the impeachment of Minister of Roads and Urban Development Abbas Akhoundi. In sum, deal or no deal, the government is certain to face mounting challenges these coming months.