After supporting President Rouhani in the past two elections, Reformists are breaking with the president in public ways. 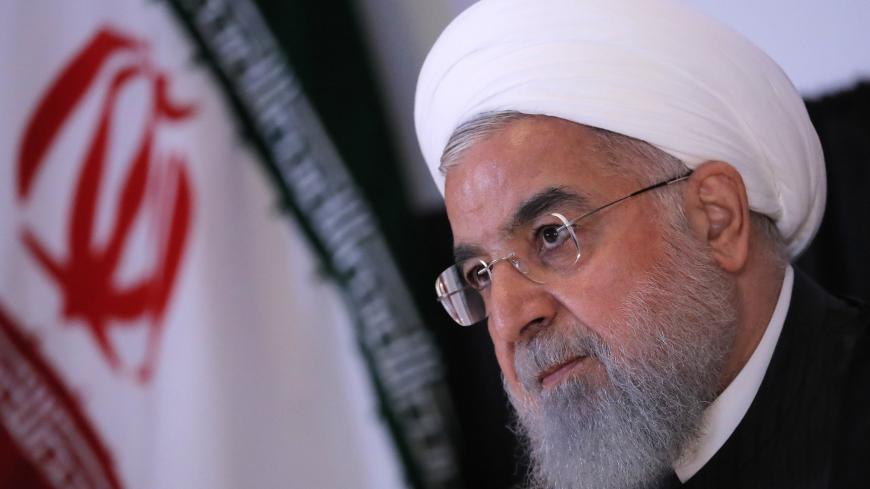 Iran's President Hassan Rouhani listens during a news conference on the sidelines of the 73rd session of the United Nations General Assembly at UN headquarters in New York, US, Sept. 26, 2018. - REUTERS/Brendan Mcdermid

"On victory day, everyone claps for a winner who acts with nonpartisanship. But they all keep a distance from him as the hard times come by," said Iran's President Hassan Rouhani on Jan. 10. These sarcastic remarks were apparently meant for some inside the Reformist camp who have recently criticized his performance.

After more than five years of unwavering support, even the Reformist camp's traditional leader, Mohammad Khatami, has spoken out against the president's "passivity." Rouhani started to fuel fury among his Reformist backers after he offered them few spots in his Cabinet following his re-election in 2017. Now, with differences that have rapidly grown in the 18 months since, few Reformists would go the extra mile to back Rouhani. Saeed Hajjarian, a top ideologue of the camp, has acknowledged the rift, blaming it on the president's failure to live up to his election slogans and resist pressure from hard-liners.

Hajjarian's stance was met with an unprecedented counterattack from Rouhani's chief of staff, Mahmoud Vaezi, who argued that, with those comments, Reformists are seeking to secure votes ahead of the 2021 presidential election. Vaezi noted that such an effort will be in vain, however. Separately, he described some Reformists as temporary election-time fans. In one case, he even referred to them as "extremist Reformists." The name-calling triggered the ire of the camp leaders.

But the crack was exposed most notably in the joint meeting with Reformists called by Rouhani last October. The invitation was declined by such senior Reformist figures as Gholam-Hossein Karbaschi (former mayor of Tehran, 1990-1998), Mostafa Moeen (former minister of higher education, 1997-2003) and Abdollah Nouri (former interior minister, 1997-1998). Reports leaked from the meeting indicated tensions between the two sides, despite having reached an agreement to set up a joint working group, which was never implemented. Earlier, in July 2018, a similar draft deal to form a joint committee had been reached, but the committee has never been formed.

With all those fast-track developments and deepening rifts, an alliance between the Rouhani government and Reformists seems to be nearly dead. Reformists justify their support for Rouhani during the 2013 and 2017 presidential elections on the grounds that they sough to thwart a power grab by hard-liners. But now, the alliance is no longer functioning and the gap is too wide to be bridged with such explanations.

With the situation showing no sign of improvement, the once conventional political arrangements could undergo fundamental changes in the 2020 parliamentary elections and the 2021 presidential vote.

Iran held three different elections from 2013 to 2017, characterized by tight competition between the two rival political factions: hard-line conservatives and an alliance between moderate and pro-Reform elements. But not anymore. In the upcoming elections, the battle is to be waged between three sides.

The crack between moderates and Reformists has emerged within the very heart of the Rouhani administration, with the controversial and furious resignations by two pro-Reform Cabinet members, namely Minister of Roads and Urban Development Abbas Akhoundi and Health Minister Hassan Ghazizadeh Hashemi. Demonstrating almost no open objection, Rouhani accepted the resignations, which were triggered by internal rifts.

Elsewhere, First Vice President Eshaq Jahangiri, a senior Reformist within the Cabinet, has openly lamented that he does not even have the authority dismiss a clerk from his office. Rumor already had it that Jahangiri had his hands tied in exercising administrative powers. His own remark couldn’t make it more valid.

That potential triangle in the political landscape, created as a result of the collapse of the Reformist-moderate alliance, will bring about two fundamental challenges. Despite enjoying social support, the Reformist camp will have to once again cope with the issue of the Guardian Council’s vetting process of candidates, for which they have no solution. The moderates might not find this a big concern, but they do have lower social approval compared to the Reformists. In 2013 and 2017, the two camps got closer for an informal coalition, as each side needed to cover the other's weakness with its strength.

Whether Iran will have to await a return of hard-liners in the executive branch is already becoming a major concern for some Reformists. Mostafa Hashemitaba, who ran for president in 2017 and worked as a deputy to President Mohammad Khatami, a Reformist, has sounded the alarm on what he described as the comeback of a new Mahmoud Ahmadinejad, the conservative president who enjoyed relentless backing from Iran's hard-liners during most of his terms. The same view has been shared by other pro-Reform figures, including pundit and political scientist Sadegh Zibakalam, who predicted a landslide "20-million-vote victory" for conservatives. Also, well-known pro-Reform columnist Mohammad Ghouchani has highlighted the camp's worries on who is to lead the government in 2021.

The split between moderates and Reformists is expected to provide hard-line conservatives with two key advantages. First, the vetting process conducted by a powerful like-minded Guardian Council will be in their favor. Second, they enjoy a stable base of public support. Although hard-liners are not backed by a majority of Iranians, the support could be decisive amid growing disillusionment among those who pinned their hopes on Reformists and moderates. In the future, those voters could shy away from ballot boxes. In other words, a boycott by those who voted for the Reformist camp could now become the winning card in the hands of the hard-liners. This, coupled with the solid base of support in the conservative layers of Iranian society, is paving the way for the comeback of the hard-liners.