In its struggle against all of the odds, Iran’s Reform movement says it is learning lessons from the past to avoid losing its last trench of power in the June presidential election. 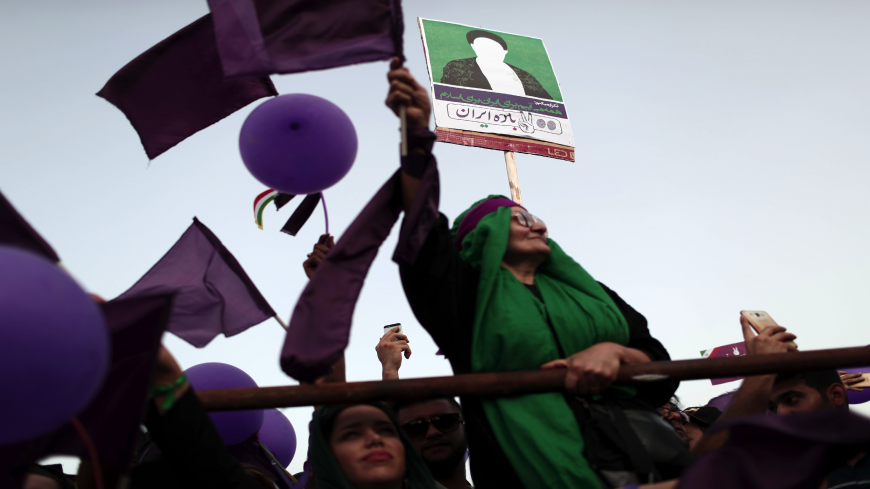 A supporter of Iranian President and candidate in the upcoming presidential elections Hassan Rouhani holds a banner bearing an image representing Iran's former Reformist president, Mohammad Khatami, during a campaign rally at Takhti Stadium in the southwestern Iranian city of Ahvaz on May 16, 2017. - BEHROUZ MEHRI/AFP via Getty Images

The more radical sectors of Iran’s embattled Reform movement say past experience has taught them not to “hire a candidate” from outside their tribe for the June presidential election.

The concept of “the hired candidate” made its way into Iran’s political discourse with the pro-Reform movement’s endorsement of Hassan Rouhani in 2013 and later for his reelection in 2017. To many members of the camp, that was a choice in reluctance between a lesser of two evils. In their view, Rouhani had never expressed allegiance to their fundamental tenets of genuine reform in the Islamic Republic.

“Due to the limitations the Reformists were facing, the senior members had no option but to endorse Rouhani,” said Mohammad Ali Abtahi, a veteran Reformist politician and close ally of the leader of the Reform movement, Mohammad Khatami. “For the past months, the Reformists have been trying to gain consensus over their new candidate because they intend to avoid introducing a hired candidate.”

The debate has resurfaced every now and then during Rouhani’s term as part of the Reformists’ attempts to disavow his performance and regain their own popularity, which has been fast waning in recent years.

Gholamali Rajaei, another senior member of the camp, has similarly argued that “the era of hiring candidates is over” and “the camp needs to strengthen its social base.” Elsewhere, Chairman of the Voice of Iranians party Sadegh Kharazi warned that a hired candidate “is not a cure” and “we have to confess to our mistake of doing so in the past.”

But none of those comments seem to be fully representative of the camp’s entire fabric, which has seen widening internal rifts that could perhaps tell part of the tale about its failures at the Iranian political scene.

Thus, consensus on whether they will ultimately hire a candidate might still be too far to reach. “When it comes to foreign and domestic policy, economy, society and culture, Rouhani has been more open-minded than many other Reformist figures,” said Mohammad Ghouchani, a senior Reformist and former political prisoner.

Widely believed to be a pragmatic, moderate figure, Rouhani has never called himself a member of the Reformist camp. And despite the unequivocal support he received from Reformists, the Iranian president appears to have all but disappointed them by his refusal to grant them top ministerial positions.

When asked to comment on such treatment, Rouhani’s right-hand man and chief of staff Mahmoud Vaezi infuriated the Reformists, suggesting that the president does not owe them his election win.

“The movement appears to have lost its fertility,” wrote Etemad, a daily that largely echoes the camp’s official views and ideology. It lamented the fact that a charismatic personality is missing and could eventually force Reformists into hiring a candidate.

In a yet harsher tone, senior Reformist pundit and political scientist Sadegh Zibakalam declared that “the Reformists have lost their social standing,” and even if the camp’s spiritual leader Khatami runs, “he stands no chance to win.”

The movement’s other key challenge is passing the vetting process, which is exclusively controlled by the hard-line Guardian Council. The supervisory body dashed the already tiny hopes for the Reform movement ahead of the 2020 parliamentary elections. The vote, therefore, became a one-sided race for the conservatives, who ultimately swept the majority of seats in the Iranian legislature.

Iran’s Reformists have for ages argued that a higher turnout correlates with their victory. In that vein, election boycotts will only pave the way for hard-liners to take the helm. Ultraconservative outlet Raja News reported on a conservative candidate’s letter to Supreme Leader Ayatollah Ali Khamenei demanding that, for a smooth victory for hard-liners, the state’s propaganda system avoid encouraging a high voter turnout. Raja News has not named the potential candidate.

But even a significant turnout may not necessarily guarantee a victory for Reformists this time, as they have to scramble to distance themselves from the Rouhani government’s overall economic record and the iron-fist crackdown on protesters in November 2019 that ensued his contentious fuel price hike scheme.

And the hard-line rivals have not been sitting back in idleness. They seem to be conscious of Reformists’ attempt to borrow a candidate. They argue that even if Reformists manage to do so, they are already a bankrupt faction. “They have been holding senior executive and legislative positions for 34 out of the 42 years of the lifetime of the Islamic Revolution. Yet they are still posing as an opposition group,” wrote Mashregh News, which is affiliated with the Islamic Revolutionary Guard Corps.

Against such a backdrop, the hard-liners seem to be banking on all the perceived inadequacies on the rival side. They are expected to go out of their way to protract any potential talks with the administration of US President Joe Biden to win credit for possible sanctions removal. If successful in doing so, hard-liners will then take advantage of the upper hand in presidential campaigning by addressing public woes and targeting Rouhani and the Reformists as a whole for their failure to ease the livelihood of ordinary Iranians.

The more radical sectors of the Reform movement contend that endorsing Rouhani was a gamble in the first place that cost them their credibility. But could all the blame for the lost popularity be directed at Rouhani? Will senior members in the divided camp agree on strategies of how to bridge their widening gap with the public?

In the next few months, and as the clock ticks on the race, Reformists will be perhaps busy discussing all those questions and more before coming up with a name for the key polls in June.