Iran’s former parliament speaker Ali Larijani is hoping for wide support in his bid for the presidency. 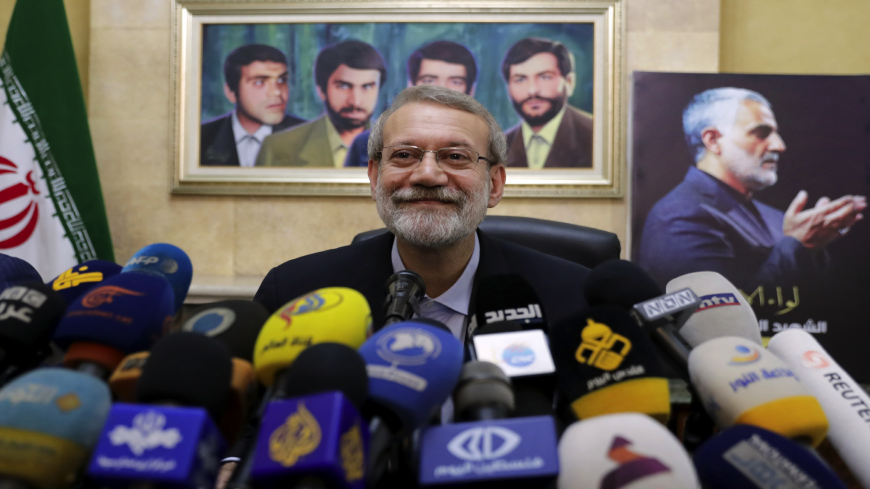 Influential veteran politician Ali Larijani is widely believed to be preparing to become Iran’s next president, leaving political circles in a heated debate on whether the longest-serving parliament speaker can win bipartisan backing from rival camps.

A report by several conservative outlets said last week that Larijani is set to launch his bid but with a condition for Reformists and traditional conservatives: “Endorse me and I will run” in the next presidential election. The election is slated for June 24, 2021.

The 63-year-old politician is currently serving as a senior adviser to Supreme Leader Ayatollah Ali Khamenei while holding a seat at the Expediency Council after he bid farewell to the parliament speakership, a post he held for 12 consecutive years.

Last November, Larijani dismissed speculation that his decision not to run again for parliament was an indication that he was planning to fulfill his long-standing ambition for presidency. But even back then, there were serious doubts that Larijani indeed meant what he announced. “He might not confirm it openly, but he does not rule it out either,” said former deputy parliament speaker Ali Motahari, who is also Larijani’s brother-in-law. Former parliamentarian Hossein Naghavi Hosseini claimed that “[Larijani] has already inaugurated his campaign headquarters.”

Larijani has demonstrated in the past two decades a gradual shift in his political leanings. The man who once rose from the hard-line layer of the conservative camp is now found to be a key player in the center-to-left sections. This he particularly proved through his unwavering support for moderate President Hassan Rouhani and the Iran nuclear deal, which cost him the favor of the hard-line elements of the conservative camp.

The more hardcore groups of the Reformist camp, on the other hand, argue that despite their endorsement of Larijani in the 2016 parliamentary elections, he is still not a welcome member in the circle. “Since when was Larijani a Reformist so that now we could think of endorsing him? This simplistic optimism by some members of the [Reformist] camp is insensible,” said Mohammad Sadegh Javadi Hesar of the pro-Reform National Trust Party.

In 2013 and 2017, those Reformists solidly rallied behind Rouhani and succeeded in holding off a victory by hard-liners. Given their overall waning popularity now and the possibility that their potential candidates could be simply disqualified by the hard-line candidate-vetting body known as the Guardian Council, the Reformists are deliberating whether they should repeat the Rouhani experience — that is, “hire a candidate” who is not a genuine Reformist but could help them breathe in the future political atmosphere.

There are loud voices in the camp in open opposition against the plan, however. “By resorting to a hired candidate, the camp will be digging its own grave,” said Reformist political figure Esfandyar Abdollahi. And in an interview with pro-Reform daily Aftab-e-Yazd, former lawmaker Jalal Jalalizadeh even regretted the camp’s support for Rouhani, “whose performance dealt the most severe blow to the camp’s credibility.” The same pattern is holding with greater vigor on the other end of the spectrum, where the hard-line Paydari movement considers Larijani a “traitor” and a “dictator.” Yet when it comes to the more moderate sections on both sides, namely pro-Rouhani groups and some traditional conservatives, Larijani is by and large seen as the right choice.

Iran’s latest election — held last February — was a race for parliament that recorded the lowest voter turnout since the 1979 Islamic Revolution. The apathy was largely interpreted as the public’s reaction to deep economic grievances, the state’s clampdown on the November fuel price protests and partly on the merciless purge of Reformist candidates at the hands of the Guardian Council. And the vote count left nearly no room for Reformists in a parliament dominated by hard-liners.

Now, to avoid being entirely sidelined from the scene, some Reformists are already examining a new exit strategy, one they say could boost voter turnout and facilitate a landslide in their favor. Based on the proposal, the camp will endorse a Larijani presidency on the condition that he appoints current Foreign Minister Mohammad Javad Zarif as his first vice president before the official start of the campaigning.

That way, they argue, Larijani could capitalize on Zarif’s popularity, neutralize the hard-liners and set the stage for an administration that will pursue closer engagement with the outside world at a critical juncture for the Islamic Republic.