Iran’s hard-liners in tug of war over parliament speakership

A battle for the speaker’s seat appears to be the opening episode of a fresh round of infighting among Iran’s hard-liners after their victory in a one-sided parliamentary election. 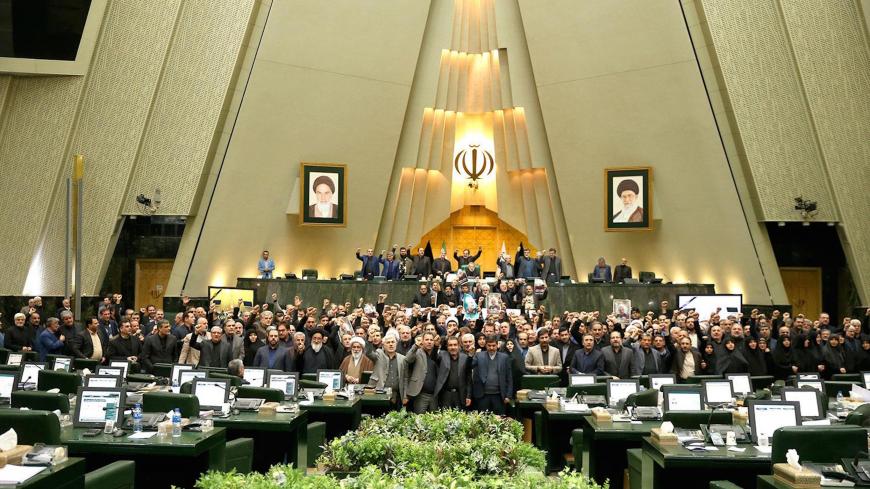 Iran's new parliament, which is to be inaugurated May 28, is seeing an spirited battle between a number of lawmakers seeking to occupy the speaker's post.

For 12 consecutive years, Ali Larijani maintained a tight grip on the position, earning the title of Iran’s longest-serving speaker. However, the influential politician decided not to run for the new parliament, triggering speculation that he will run in the 2021 presidential election.

With Larijani departing, the fight is on for the powerful position. The Feb. 21 election resulted in an easy landslide victory for the conservative camp after their traditional Reformist foes were overwhelmingly purged by the Guardian Council, the ultraconservative body in charge of A-to-Z electoral supervision, including who is qualified to run.

The one-sided competition also witnessed a record-low turnout, with unprecedented voter apathy in the capital, Tehran, where only 26% of those eligible showed up at the ballot box, bringing into question the winners' overall legitimacy. Of the 289 members of the 11th parliament, fewer than two dozen are of Reformist or moderate leanings.

The big takeover seems to have done little to bring the divided conservatives any closer together. Long-standing internal rifts and the consequent failure to fall into step behind a single candidate helped bring them two consecutive defeats in the 2013 and 2017 presidential elections. And the debate on who should preside over the new parliament has now stirred up the old feuds.

In theory, Mohammad Bagher Ghalibaf, who won the largest number of votes in the Tehran constituency, has the best chance for the speakership. Despite facing multiple fraud accusations dating back to his 12-year tenure as mayor of Tehran and three failed attempts for presidency, Ghalibaf continues to exert significant influence in Iran’s political landscape. Nevertheless, a free pass to the speakership does not appear to be in the cards. “He should stay glued to his own seat and refrain from entering the battle for speakership,” said Mansour Haghighatpour, a former hard-line lawmaker, who warned that Ghalibaf “will be run over” by members of Paydari — the Front of the Islamic Revolution Stability, which represents the most uncompromising layer of the conservative camp.

Paydari has its own man, its Secretary-General Morteza Agha-Tehrani, in mind. The hard-line cleric and former chief of the Islamic Institute of New York is hoping for genuine support from a crowd of like-minded fellow parliamentarians. Despite calls for unity from across the wider spectrum, Agha-Tehrani and his allies within Paydari refused to include Ghalibaf in their proposed list for the Tehran constituency, an early signal that the cleric is no less ambitious than the former Tehran mayor.

Speculation indicates that nearly a dozen more elected members of parliament are also seeking the post. Veteran politician Mostafa Mir-Salim of the Islamic Coalition Party, who was one of the defeated candidates in the 2017 presidential election, is now back with more confidence after winning the second-highest number of votes in the capital.

Meanwhile, a large group of the newly elected lawmakers is in the camp of former hard-line President Mahmoud Ahmadinejad (2005-2013), who parted ways years ago from the traditional conservatives. The so-called Ahmadinejad team of nearly 50 members in the new parliament is mostly composed of his former Cabinet members and ex-governors. Yet even inside that clan, unity is lacking as four individuals are eyeing the speakership. Among them is the former head of the Atomic Energy Organization of Iran Fereydoun Abbasi, who escaped a 2010 assassination attempt that Tehran believes was one in a chain of Mossad-plotted attacks targeting Iranian nuclear scientists.

“In my view, it makes no difference who the next speaker is, because when it comes to crucial matters, it’s not the parliament that decides,” said Ali Motahari, an outspoken outgoing lawmaker and one of the many pro-Reform parliamentarians disqualified by the Guardian Council. Questions over the extent of the Iranian parliament’s authority were put on display again in November after the state pressed ahead with a contentious scheme on fuel price hikes that unleashed public discontent and threw the country into several days of deadly mayhem. Back then, some Iranian lawmakers, including Motahari, made vocal complaints that the parliament had been kept in the dark regarding a plan with such important national security implications.

A parliament dominated by hard-liners is not good news for moderate President Hassan Rouhani, who will have to spend the closing year of his term struggling with them over every single step he takes. For the past seven years, Rouhani has enjoyed strong backing from Larijani, a man who increasingly broke free from the conservative camp he had hailed from.

The parliament speaker’s unwavering support of the president during the entire course of the nuclear deal and even after the US withdrawal from the pact pitted Larijani's former political allies against him. Most famously, they accuse Larijani of influencing other lawmakers’ votes in what they believe was a forced ratification of the nuclear deal in a “20-minute” parliamentary session.”

In the upcoming parliament, the top priority should be about turning Larijani’s assembly into a real parliament, tweeted speaker hopeful Elias Naderan, suggesting that the president is in for a tough showdown with a new parliament packed with die-hard critics.