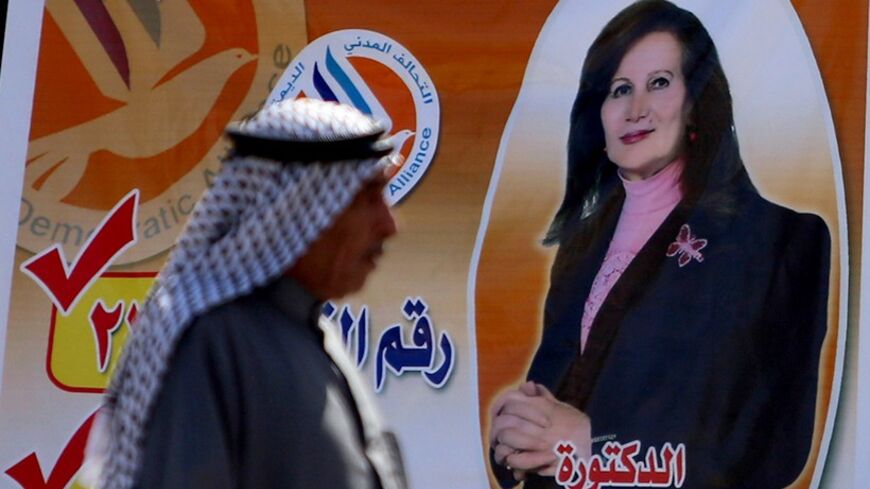 An Iraqi man walks past an electoral campaign poster on a street in Baghdad, April 3, 2014. - ALI AL-SAADI/AFP/Getty Images

The practice of taking advantage of sectarian and religious slogans is still common on the Iraqi electoral scene. This practice is clearly shown in electoral banners and the statements issued by political powers, despite all their talk of “national unity” and “social solidarity.”

Statements made March 30 by Hanan al-Fatlawi, a parliament member for the State of Law Coalition, have stirred controversy. She called for “equality in death” between Sunnis and Shiites.

Furthermore, politician Mishaan al-Jabbouri, who lives in exile in Syria, made various pre-election calls for the “liberation of Iraq from the Kurdish occupation.” A number of in-absentia judgments over terrorism accusations were passed against Jabbouri over these statements.

Such statements are nothing new for the Iraqi electoral scene. For years, politicians have taken advantage of national and sectarian affiliations to gain support, and there has been a continuous dispute in Iraq over ruling out candidates because they did not meet the condition of “good conduct” required by Iraqi law. In fact, the Iraqi judiciary has strongly defended the decisions to rule out potential candidates.

It should be noted that some decisions to exclude candidates from elections in the past were made over statements that were less extreme than those made by Fatlawi and Jabbouri. The majority of these decisions were made based on cases that were not yet legally settled.

Any form of sectarian or nationalist incitement is an explicit and flagrant violation of Article 7 of the Iraqi constitution, which bans “any entity or program that adopts, incites, facilitates, glorifies, promotes or justifies racism terrorism, accusations of being an infidel or ethnic cleansing.”

It is only natural to refer to this article, since the constitutional text is explicit and clear, just as the statements of the candidates.

Sarmad al-Tai, a writer who faced arrest warrants over statements that were deemed offensive to the Iraqi prime minister, told Al-Monitor, “Such cases prove once again the need for radical and genuine political reform.”

He said, “The country cannot move forward based on personal interpretations of the constitution and laws.”

“What shows disparity is that the law upon which arrest warrants were issued against me was passed by the former regime, which strived to silence and suppress opposition members and deprive journalism of its role. Meanwhile, the constitutional text that is not implemented as a condition for candidates in the elections was passed during the post-Saddam [Hussein] era. It was written based on the fact that Iraq is a democratic, pluralistic country where social equity and human rights are observed,” Tai said.

Some parliamentarians who were barred from candidacy found in this issue proof of the injustice they were subject to, yet, just as did parliament member Jawad Suhaili, they neglected the legal aspects.

In fact, Suhaili himself, who was barred from running because of a complaint filed by Fatlawi, has filed a complaint to the electoral commission to ban Fatlawi’s candidacy based on her statements.

The main issue in this case is that many candidates are still finding in the racist, sectarian environment a way to shield themselves from accusations of incompetence, corruption and mismanagement, which are leveled against the political sphere in general.

The return of a sectarian and racist tone to the Iraqi political scene can be directly attributed to the setback in the popularity of many political powers, notably those who made many promises in previous elections and did not keep any of them.

The political platform that holds a vision and proposes solutions is a crucial element that is absent on the political scene.

Except for some coalitions that presented detailed platforms on what they could achieve on the legislative, executive and regulatory levels, electoral slogans were used as a substitution for electoral platforms. The Iraqi elections will decide on the awareness of Iraqi voters and their ability to differentiate between reform platforms and sectarian and racist slogans.