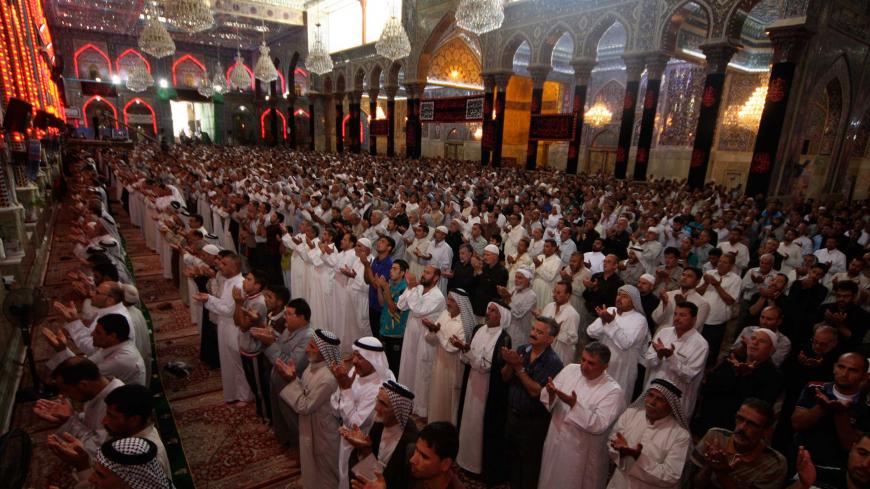 The Iraqi government, headed by Prime Minister Haider al-Abadi, is seeking to penalize people for the hate speech prevalent in Iraqi society by arresting anyone who expresses such ideas or promotes slogans that insult former or current religious and social figures.

Each year around this time, millions of Shiite Muslims make the pilgrimage to the shrine of Imam Hussein in Karbala for the festival of Arbaeen. People observing Arbaeen sometimes raise banners and shout slogans insulting Sunni figures. In the past, these people were met with public indignation — but not legal measures.

Wahab al-Tai, the interior minister's media adviser, told Al-Monitor in an interview, “Up until Nov. 8, the ministry had arrested 76 people who were caught promoting sectarianism. Out of the 76 arrested, 25 were in Karbala and 51 in Babil [province]. Most were Iraqis, but some foreigners were arrested as well.”

The Interior Ministry was reacting to a video that has been circulating. The video, taken in Karbala during the festival, shows a group of followers of Shiite Grand Ayatollah Sadiq Hussaini Shirazi — a group known for promoting hateful speech toward important Sunni religious figures. The video shows a young man with a loudspeaker cursing Umar ibn al-Khattab, a senior companion of the Prophet Muhammad considered sacred by Sunnis. Despite all the arrests, that man is still on the loose.

Only two days after appearing in the first video, the same man appeared in another video saying that he was only “expressing his opinion.”

The ministry’s measures against promoters of sectarianism received both political and public support. Sayyid Ahmad al-Safi, the representative of Shiite Grand Ayatollah Ali Al-Sistani in Najaf, applauded the move in his Friday sermon in Karbala on Nov. 10.

However, Sunni scholar Abdul Hakim al-Saadi strongly doubts the effectiveness of the measures. He told Al-Monitor, “This move is misleading and only blinds us when — in reality — Iraqi politics are grounded in sectarianism and apportionment.”

The slogans raised in Karbala were not only religious but also political. Some people took advantage of the visit to write political messages in Farsi on the walls around the streets of the province, attacking Saudi Arabia and the United States.

By writing such slogans on street walls, some Iranian visitors were trying to earn Iraqis’ friendship and share their “anger” at Saudi Arabia, which represents the regional Arab-Sunni axis. Yet the Iraqi public rejected this move.

Activist Ebrahym al-Fraty told Al-Monitor, “The slogans raised against the Sahaba [companions of the prophet], the United States and Saudi Arabia were solely meant to push Iraq to issues that would worsen its crises and benefit other countries.”

The Interior Ministry is trying to deal seriously with instigators of sectarianism, according to its spokesman, Brig. Gen. Saad Maan. “This spiteful and extremist discourse is only the start of instability and wars. From now on, the ministry will not be passive toward anyone who tries to stir tensions," Maan told Al-Monitor.

The ministry’s new inclination might put it at odds with some extremist Shiite religious leaders who have popularized insults against Sunni figures.

Shiite religious figure Taha al-Batata said there is no systematic approach among Shiites to insult the Sahaba and their symbols, and during an interview with Al-Monitor he praised the Interior Ministry’s measures.

The Iraqi Penal Code calls for harsh punishment against those who libel or defame others. The penalty for such actions ranges from a fine to imprisonment, depending on the violation's magnitude. But though offenders are being charged under the existing code, Iraqi legislation doesn't explicitly refer to hate speech or provoking strife. Thus, many people see a need for specific legislation, in compliance with national and international human rights procedures, that defines what qualifies as socially disruptive without infringing on freedom of expression.

Iraqi parliament member Ali al-Bedeiri insists on the need to pass a law making a criminal of anyone capable of dividing the Iraqi people and creating sectarian conflict through traditional and social media or any other platform. Bedeiri told Al-Monitor, “The absence of a law that criminalizes such actions [obstructs] the capacity of the authorities to punish and pursue the culprits" in a consistent manner.

Although some human rights organizations have tried for years to get the Iraqi parliament to draft a law that criminalizes hate speech, the attempt has been unsuccessful because many in the legislature aren't exactly motivated to pass such a law. The political blocs in parliament own dozens of media outlets promoting hate speech and sectarianism, and they assign people from their parties to manage the outlets. For this reason, politicians aren't eager to hold those outlets accountable.