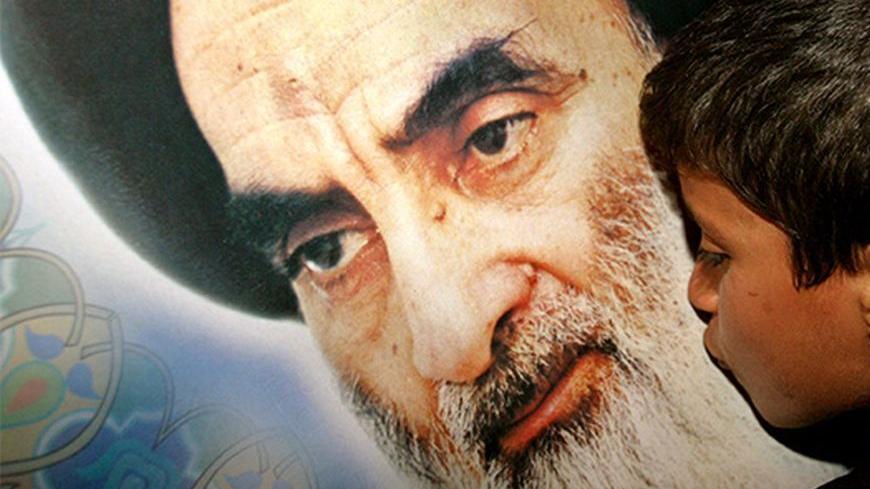 A boy kisses a poster of the Ayatollah Ali al-Sistani in Karbala, Iraq, Feb. 6, 2004. - REUTERS/Ali Jasim

Amid the rising flames of sectarianism, occasionally there are people and groups that hurl insults at other religious sects, fueling the fire and stoking the cycle of violence and hatred. In contrast, moderate Iraqi clergymen make every effort to thwart this trend and try, as much as possible, to limit its influence.

Among the latest developments of the sectarian crisis that rages in Iraq, dozens of young men organized a provocative march in the predominantly Sunni al-Adhamiyah neighborhood of Baghdad on Oct. 7. They did not chant for a return to unity and the rejection of violence, nor did they condemn bombings and terrorism. They, in fact, hurled insults and cursed Sunni holy historical figures, labeling them “nawasib,” a derogatory term used against Sunnis.

A video clip shows that the group marched with the protection of members of Iraq’s security forces, leading many to doubt the spontaneity of the act. This also raised hypotheses as to the existence of political motives behind the march on the part of parties affiliated with the regime.

This same faction previously established satellite TV channels, such as Fadak and Sawt Alitraa, that transmit from European countries, as well as YouTube channels on which they publicly air insults and curses against some of the Prophet Muhammad’s female relatives and companions who are revered by Sunnis. The faction belongs to an extremist Shiite movement that believes insulting the aforementioned figures is a duty prescribed by their faith.

The faction is faced by an equally extremist Sunni movement that believes Shiites are apostates, the killing of whom is permissible under certain circumstances. It also runs many satellite channels and websites, the most important and best known of them among Iraqis is the Safa Channel, which has been broadcasting for years, sermons and interviews that are degrading and demeaning to Shiites in the region, and Iraq in particular.

As a result, Iraq has been transformed into a raging inferno pitting extremists from both sides against each other. Usually, after each wave of abuse, tsunami-like reactions ensue from the affronted side, squelching the voices of moderation calling for calm.

Iraq’s Sunni mufti, Sheikh Rafeh al-Rifai, issued a statement calling for a general strike in the six Iraqi provinces with Sunni majorities, threatening dire consequences if such events were to re-occur. The strike did in fact take place on Oct. 10 and included the closure of schools, as well as government institutions and markets in the aforementioned provinces. Meanwhile, Facebook and other websites overflowed with violent, demeaning reactions similar to those that accompanied the instigating event.

In contrast, the highest-ranking Shiite authority in Iraq, Ali al-Sistani, issued a fatwa condemning the abuse of Sunni sanctities, saying: “This is to be condemned and denounced, and is contrary to the instructions of Shiite Imams.” The Imam al-Khoei Foundation, which is influential among Shiite religious circles, issued a statement denouncing events and called for the respect of everyone’s sanctities.

Muqtada al-Sadr also delivered a speech denouncing and condemning the provocative act by some feeble minds, as he put it. At the same time, he decried the wave of bomb attacks, and tried to distinguish between moderate and extremist Sunnis. He said: “I salute Iraqi Sunnis who have shunned sectarianism and vile ideological extremism; who have rejected terrorism, al-Qaeda, booby-traps and acts of violence.” Before the events, another fatwa was issued in this regard by the leader of Iran’s Islamic Revolution, Ali Khamenei. It read: “It is forbidden to abuse our Sunni brothers’ symbols, as it is forbidden to accuse the Prophet’s wife of anything that taints her honor.”

As a result of these developments, a number of Iraqi social activists proposed the establishment of a sectarian observatory that monitors provocative acts in the country and contains their dangerous effects through legal means and the media.

As one rumor spread about a legal decision to apprehend the leader of the group that perpetrated the provocative act, another claimed that the Council of Ministers had assigned an armed detail to protect that same person because he had received threats on Facebook.

No official statement has been issued by the Iraqi government in this regard, despite the seriousness of what occurred and its dangerous ramifications, while noting that a number of laws criminalize insulting the sanctities of others and stirring sectarian tensions, and require that the government punish those who commit such acts.

Finally, in these circumstances, the Iraqi government is expected to remain impartial and perform its legal duties. This is to prevent, through the implementation of legislation, the occurrence of similar acts.