As sectarian violence continues to plague Iraq, the government must focus on bringing together Sunni and Shiite preachers to reconcile their views and calm the tension among their followers. 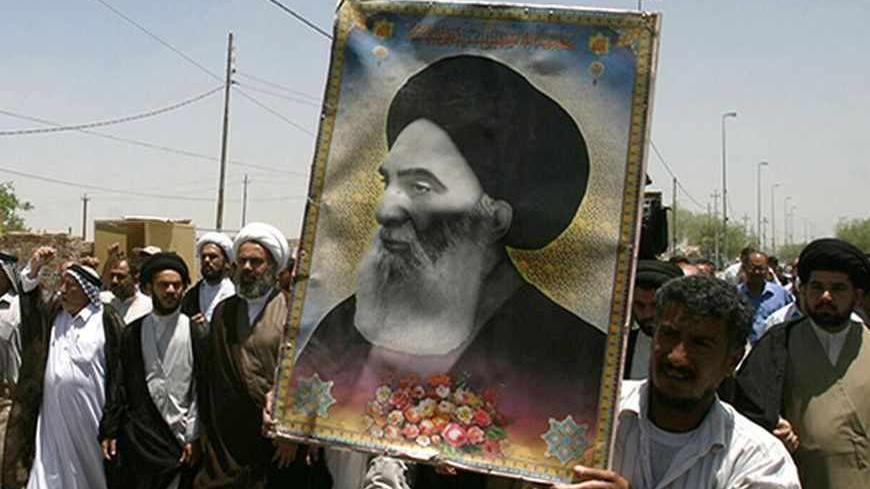 Religious sermons play an important role in the social and political crises of Iraq, a country characterized by a diversity of religious identities. These sermons play a dual role, depending on the nature of the preachers. Sometimes they escalate the sectarian crisis, while at other times they help alleviate it. While some Iraqi religious figures use conciliatory and tolerant rhetoric in the speeches they give on religious occasions, a number of others continuously espouse hatred and violence. These two practices are evident in both of the major sects in the country: Shiites and Sunnis.

On the Shiite side, Ali al-Sistani represents those who are moderate and tolerant toward other sects and religions in Iraq. This is evident in his personal statements and positions, as well in official statements made by his representatives. There is also intense work being done by Shiite religious figures to close the gap between Shiites and Sunnis. This is done through institutions and dialogue sessions, most notably the Imam al-Khoei Foundation, which regularly works with Sunni figures and non-Muslims to reconcile views and promote tolerance among various religions and sects. This foundation recently contributed to establishing the Iraqi Council for Interfaith Dialogue.

On the other side, there are two kinds of Shiite religious figures who significantly fuel sectarian conflict. The first category consists of clerics who have helped to establish and lead militias that use violence against followers of other sects. Meanwhile, the second group is comprised of preachers who exploit religious occasions to sow enmity and hatred toward other sects, Sunnis in particular.

There is also a moderate line on the Sunni side, represented by Sheikh Abdul Malik al-Saadi, the most widely accepted figure among Iraq's Sunnis, especially in Anbar province. Saadi is known for his nationalist speeches that warn against sectarian rhetoric. He has become the target of scathing criticism from Sunni extremists, who call him negligent because, in his statements, he says that there is no difference between Sunnis and Shiites and all Iraqis are partners in the homeland.

The Iraqi government’s rejection of Saadi’s proposals to solve the crisis between the government and the Sunni provinces has weakened his position and strengthened that of hard-line Sunni preachers and clerics. There are a number of preachers among the extremists both in Iraq and abroad who are brazenly promoting violence against other sects, particularly the Shiites, whom they refer to as “rafidah” (defectors) and other offensive expressions. Their goal is to turn the present political conflict into a sectarian one between Shiites and Sunnis.

This estrangement between religious figures in Iraq is one of the principal causes of misunderstandings and of the escalations in sectarian disputes. Many Shiites feel a great deal of irritation toward Sunni scholars and preachers for not condemning the bombings and violence seen most often in Shiite regions, as if they are only concerned by their own affairs and do not expend the least thought for other Iraqi sects. Also, Sunnis complain about the lack of Shiite support for their demands. The greater part of this criticism appears to stem from a lack of communication between the two sides. It is worth mentioning that Sistani supports the Sunni demands, and has asked the government for a little more give and take with them. Saadi also has declared on more than one occasion that the Sunnis' demands are not only for Sunnis, but concern the rights of Iraqis all across the country.

Accordingly, it appears that improvements to the strained relations between Shiite and Sunni clerics via joint meetings and the development of ongoing communication networks between them is of the utmost importance. This is their chance to prevent the escalation of sectarian discourse and turn the negative role played by preachers into a positive one in the sectarian conflict.