Najaf's Shiite authorities in Iran and Iraq issue fatwas against insults to Sunni figures and their sanctities. 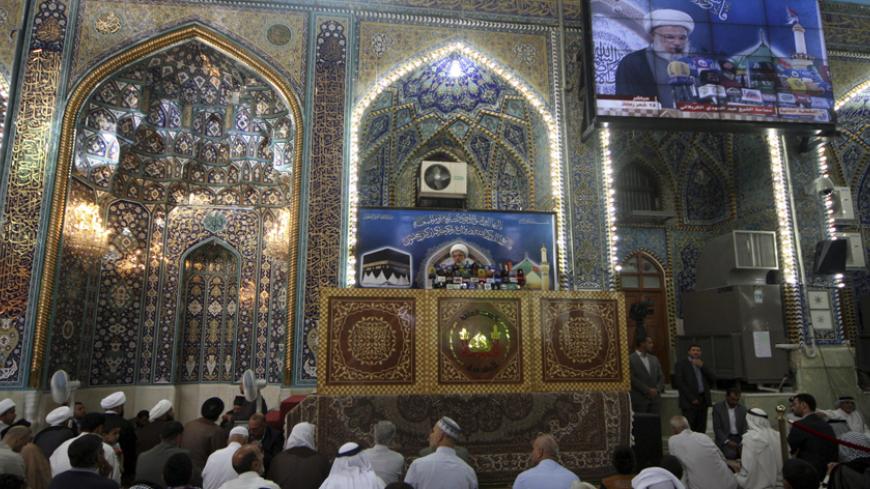 Shiite Muslims listen to Sheikh Abdul Mehdi Al-Karbala'i speak as he delivers the text of a sermon calling for respect for the rights of all Iraqis regardless of sect or politics, by Iraq's top Shiite cleric Grand Ayatollah Ali al-Sistani, during Friday prayers at the Imam Hussein shrine in the holy city of Karbala, July 11, 2014. - REUTERS/Mushtaq Muhammed

During the last week of 2014, Al-Azhar’s Grand Imam Ahmed al-Tayeb demanded that Shiite authorities in Iran and Iraq issue clear fatwas strictly forbidding the insulting of Sunni figures and their sanctities. This happened during the visit of Mahmoud Mahmoudian, the new head of Iran’s Interest Desk in Egypt.

Tayeb called on Muslim scholars to “avoid strife between Sunnis and Shiites, as it is tearing the Islamic nation apart and preventing consensus and dialogue between both sects.”

Prominent Shiite authorities had issued several fatwas in the past, forbidding any sort of attack on Sunni figures and sites. These included Ayatollah Ali al-Sistani’s fatwa in October 2013, when he strictly forbade attacking Sunni sanctities, stating, “These are condemnable acts, and they violate the Shiite imams’ orders.” Moreover, the Supreme Guide of the Islamic Republic issued several fatwas on different occasions, in which he clearly forbade “offending Sunni figures and insulting the wives of the prophet.”

Several Shiite authorities cooperated with Tayeb’s latest request and issued several fatwas and statements forbidding insulting Sunnis. Shiite authority Hussein al-Sadr issued a detailed statement that noted, “We have reiterated that respecting religious figures and sanctities of each confession and religion is a critical duty imposed by Sharia and religious order on everyone. Besides, it is a humanitarian and moral mission before being a religious duty.”

Sadr also called the parliament to issue “a special law related to insulting the sanctities of religions and sects in the Iraqi parliament to deter provocative and erratic behavior.”

In a phone interview with Sadr’s office, a source said on condition of anonymity that Sadr and Tayeb are on good terms and share mutual respect. He added that the Shiite authority holds the utmost respect and appreciation for the moderate role that Al-Azhar represents. The same source asserted that insulting religions is completely unacceptable, and there are no exceptions.

Bashir al-Najafi, a spokesperson for the office of one of Najaf’s Shiite authorities, announced the latter’s stance regarding “forbidding insulting confessional and religious figures.”

He said, “Sporadic individual behavior reflects reactions to the acts of some people who are committing murder, insulting others or enslaving women under the pretext of being Sunnis. But they are far from that.”

Undoubtedly, relations between Sunnis and Shiites are at their worst. Religious and political issues have intertwined to create bloody conflicts in several regions of the Muslim world, breeding rancor and mistrust between them. Therefore, it is unlikely that the exchange of positive statements and fatwas in solidarity will significantly improve relations.

One major sign of the lack of trust between Shiites and Sunnis came in Tayeb’s refusal to participate in the conference for sectarian convergence in Tehran, held Jan. 7-9.

Moreover, the Sunni presence at the conference was not remarkable at all. A media photo of participants at a similar conference in the Iranian Khorasan province depicted the huge division between both sides in the past years, as Sunnis and Shiites appeared to be praying separately. In Islamic jurisprudence, people cannot organize two prayers in the same place.

The issue is currently much bigger than insults, which are nothing new. The sectarian strife that the region is witnessing today is the result of decades of work by religious regimes in the region, specifically in Saudi Arabia and Iran, where religion has been used to serve political agendas. The situation has gotten out of hand, and these regimes are themselves threatened. Therefore, Shiite and Sunni governments are resorting less to religious discourse, and are taking more precautions.

On another note, insulting religions comes within the context of a lack of tolerance by the region’s communities toward mockery in religious matters. The Sunni scholars’ request that Shiites stop insulting their sanctities and figures is equivalent to the objections to Western newspapers insulting the Prophet Muhammad. In general, the region is overly sensitive to criticism of religion and sacred figures. In light of this, religious tolerance should be widened on two levels: First, there should be mutual respect. Second, there should be tolerance and self-restraint toward insulting religious figures.

Egyptian President Abdel Fattah al-Sisi gave a speech on the occasion of the birth of the Prophet Muhammad on Jan. 3, when he called for breaking free from texts and ideas that were sacred centuries ago and that have become a source of anxiety for the whole world. In the presence of Tayeb, Sisi said, “How is it possible that the ideologies that we have sanctified for hundreds of years breed feelings of anxiety, danger, murder and destruction in the whole world and nation?”

In conclusion, despite the positive development in the exchange of feelings of respect between Shiite and Sunni scholars, there should be a religious reform project that includes separating religion from politics and increasing religious tolerance.