Amid rising assassination attempts of candidates for today’s Iraqi parliamentary elections, some political blocs are accusing parties in the government of being behind these operations. 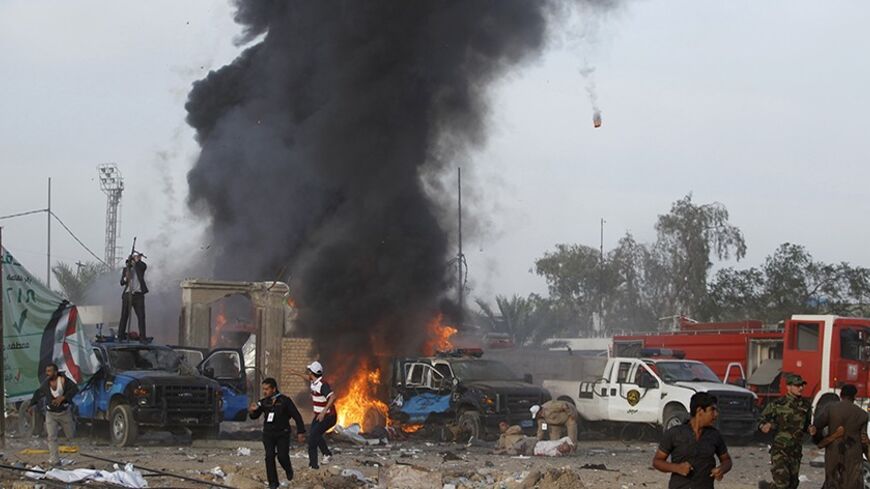 Iraqi security forces react at the scene of a car bomb attack at a Shiite political organization's rally in Baghdad, April 25, 2014. - REUTERS/Thaier al-Sudani

On March 25, three candidates for the parliamentary elections in Iraq were subject to an assassination attempt in Diyala province. The candidates miraculously survived.

In the same month, a candidate from the Mutahidoun bloc, led by parliament Speaker Osama al-Nujaifi, was killed in an armed attack by unknown assailants north of Ninevah. Moreover, Abdul Karim Dosari, another candidate of the Mutahidoun bloc, was assassinated in the city of Basra along with two of his bodyguards on April 27.

After these events, assassination attempts targeting candidates continued. Some survived these attempts, such as Sadrist movement member of parliament (MP) Maha al-Duri, who is known for attacking other blocs and exposing corruption. Other candidates were killed by explosive devices and pistols outfitted with silencers.

MP Walid Mohammadi, a candidate from the Mutahidoun bloc, did not exclude the possibility that political parties in the government might be behind the assassinations of candidates from competing blocs. “These parties resorted to all means to eliminate their adversaries, including opening controversial files, instigating legal actions against them and preventing them from participating in the elections,” Mohammadi told Al-Monitor. “They recently organized their assassination with silenced pistols or car bombs.”

Mohammadi, a member of the political bloc most targeted by these assassinations, refused to name the responsible parties. “These violations and crimes threaten the democratic process in Iraq,” he said. “The unethical competition between political rivals led some to resort to murder for eliminating their opponents, and this is what has been happening in light of the increase in candidates’ assassinations.”

MP Hussein Sharifi, a Sadrist candidate, said, “The series of assassinations that started with the US occupation of Iraq in 2003, have not yet stopped.” He told Al-Monitor that the assassination operations had dramatically escalated as the elections approached.

Sharifi, whose colleague-candidate in the Sadrist bloc was assassinated, said, “The government must provide the necessary protection to save the lives of the candidates since they are Iraqi citizens even if they disagreed with its approach and political orientation.” He suggested that governmental bodies were involved in the assassinations of candidates for political motives. “International intelligence and hired assassins are implementing an assassination scheme amid major security failure,” he said.

These are not the only elections that witnessed assassinations of candidates: The provincial council elections held on April 20, 2013, saw similar operations.

Political blocs in Iraq often accuse each other of being behind the assassinations of candidates, but the investigations conducted by security forces have yet to prove anything.