Although the post of president in Iraq has been held by a Kurdish politician, Jalal Talabani, since 2005, there are reports that some Sunni politicians may be looking to assume the post. 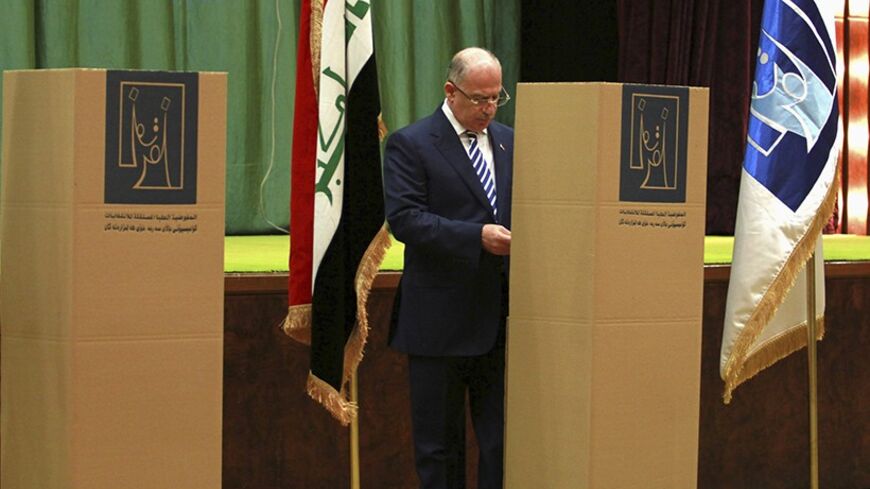 Osama al-Nujaifi casts his vote at a polling station during a parliamentary election in Baghdad, April 30, 2014. Could the speaker of Iraq's parliament become the country's next president? - REUTERS/Mahmoud Raouf Mahmoud

The post of president of the Republic of Iraq has become part of the political conflict. Any talk of the presidential aspirations of Osama al-Nujaifi — Iraq’s parliament speaker and head of the Sunni Mutahidoun bloc — is countered by the insistence of Kurdish parties and the Iraqi Kurdistan Region that the post be reserved for the Kurds. The latter argue that maintaining this post is the right of the Kurdish people.

Prior to the April 30 parliamentary elections, reports surfaced that the Sunnis sought to restore their control of this post, which they lost during the US invasion of Iraq in 2003. The reports said that Nujaifi was concluding understandings with various political forces to restore the post to the Sunnis. According to the Iraqi Constitution, the post of president is considered honorary.

The Kurdish parties, which cannot nominate current President Jalal Talabani, the head of the Patriotic Union of Kurdistan (PUK), since he has served the maximum of two successive terms, remained silent on these reports. Many observers believed this silence implied Kurdish approval of Nujaifi assuming the presidential post. However, the office of the presidency of the Kurdistan Region was quick to announce that the post shall remain in the hands of the Kurds.

Nevertheless, this announcement came amid a conflict between the three Kurdish parties in the Kurdistan Region, which aspire to nominate one of their members for president.

The PUK nominated Kirkuk governor and Talabani’s personal physician, Najmeddine Karim. Meanwhile, the Movement for Change (Gorran) and the Kurdistan Democratic Party (KDP) have remained silent, at least until the election results are final.

Kamal Raouf, a political analyst and author, told Al-Monitor, "The two parties that remained silent are waiting for the election’s results," adding, "Karim is not an acceptable candidate for Barzani’s KDP."

Raouf said, "The debate over the presidency of the republic between the Kurdish parties will be limited to the PUK and the Movement for Change," pronouncing it likely that "the [next] president will be a member of the PUK."

"The figures who can be accepted by everyone include Barham Salih, who previously served as prime minister of the Kurdistan Regional Government, and Adnan Mufti, a leader of the PUK," he said.

Raouf ruled out the possibility of Kurds relinquishing the presidential post to Sunni parties, yet Walid Mohammadi, a member of the Mutahidoun bloc, said, "The presidency of the republic depends on [the Mutahidoun] bloc’s alliances with the other blocs."

Speaking to Al-Monitor, Mohammadi said, “There is an aspiration to obtain the post of president of the republic, which will be decided by the future alliances. And we are working [to form alliances].”

He continued, “The understandings that are under way by the Mutahidoun bloc have not resulted in tangible agreements yet.”

In parallel, Mahmoud Othman, leader of the Kurdish coalition in Baghdad, said, “The presidency will not be given to non-Kurds.”

Othman told Al-Monitor, “The alliances between the Kurdish parties have not resulted in the nomination of a figure to this post so far,” adding, “The Kurdish parties will soon be sitting at the dialogue table to choose their candidate for the post of president of the republic."

Editor's note: A previous version of this article incorrectly identified Mahmoud Othman as a KDP leader. He is head of the Kurdish bloc in Baghdad and not a member of the KDP.