In the lead-up to the April 30 Iraqi elections, Ammar al-Hakim’s Citizen Coalition has sought to ensure comprehensive reform and released a serious and thorough electoral program. 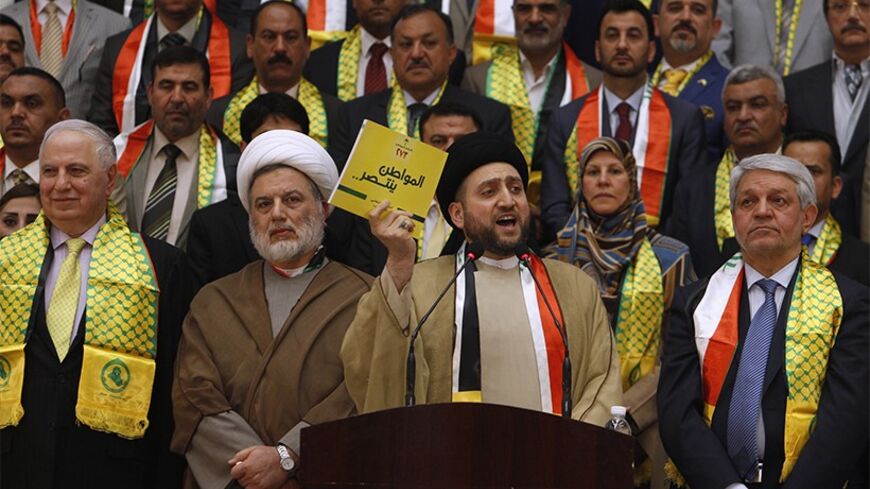 Ammar al-Hakim (C) speaks to his supporters in Baghdad during a ceremony held to announce his election platform, April 5, 2014. - REUTERS/Ahmed Saad

In an April 5 speech, Ammar al-Hakim, head of the Citizen Coalition, said that his coalition’s reform-minded approach is based on three tenets: the need for Iraq to be ruled by a competent team without wasting time on managing crises; the necessity to adopt a clear legal road map to restructure the Iraqi state; and the initiation of a real administrative revolution in state institutions.

The Citizen Coalition represents an alliance between the Islamic Supreme Council of Iraq (ISCI) and 18 other parties and factions, including the Iraqi National Congress headed by Ahmad Chalabi, and individuals such as former government spokesman Ali al-Dabbagh and former Interior Minister Jawad al-Boulani. The coalition is the outcome of a renewal process in the ISCI, beginning among the leadership, which has influenced its formation and rhetoric. Since the last provincial elections in April 2013, when the coalition won 78 seats — ranking second after Prime Minister Nouri al-Maliki's State of Law Coalition — the ISCI seems to be regaining its old stature that once made it the country's largest Shiite political force. Its influence had waned after the death of its former leader Abdul Aziz al-Hakim, and was further damaged after its electoral setback in 2010, when it only managed to win 20 seats. It later lost some of these seats when the Badr Organization, its de facto military wing, defected to join Maliki’s coalition.

Since then, the ISCI has undergone wide-scale restructuring spearheaded by its young leader, Hakim. This process started by affirming the leadership of Hakim while marginalizing old hawkish guards such as Jalal al-Din al-Saghir. The ISCI also decided to abstain from entering the cabinet, concentrating instead on working through parliament and from outside the executive branch. Hakim has adopted more moderate stances and rhetoric, avoiding becoming directly embroiled in the country's successive political crises. This was part of a strategy to expand its ranks to include those with liberal, secular and nonreligious proclivities, to reposition the group to the left of Maliki’s coalition.

Two main accusations leveled against the ISCI played a role in its decline: first, its administrative failures when it was the largest Shiite bloc and in control of the majority of southern Iraq’s provincial councils, and second, sectarianism. By not assuming executive duties, the ISCI tried to shed its administratively inept and corrupt image. It also adopted a conciliatory rhetoric that focused on concepts such as dialogue, partnership and openness, while avoiding taking any stance that would be construed as supporting sectarian exclusionism. At a time when Maliki’s alliances veered more toward the right, the ISCI seemed intent on taking a more moderate outlook that permitted it to build bridges with other factions.

The ISCI does not hide its ambition to play a more significant role in directing the country after the next elections. Some observers are even proposing the names of leaders from the ISCI-led Citizen Coalition to succeed Maliki, such as Adil Abdel-Mahdi, Baqir Jabr Solagh and Ahmad Chalabi. Reports even emerged two months ago indicating that Hakim himself was thinking about running for the post, although the ISCI later denied such a possibility.

In general, the ISCI has adopted a more cautious stance in its opposition to a third term for Maliki. Moreover, it is trying as much as possible to conceal its desire for the position. Unlike Muqtada al-Sadr and his supporters — who clearly oppose, and openly and harshly criticize Maliki — the ISCI has adopted a calmer tone and avoids personal attacks, most likely because it believes that maintaining good relations with Maliki’s coalition will give it a better chance to maneuver while not antagonizing the prime minister.

Still, speeches by ISCI leaders and prominent figures of the Citizen Coalition are replete with criticism of Maliki’s policies. This trend has grown more pronounced since the start of the electoral campaign. In this regard, Abdel-Mahdi, one of the ISCI’s leaders, defiantly stated on April 7 that some behaviors today are akin to “bullying, unilateralism and the transformation of the state, judiciary and people into 'tools' wielded by the regime.” Furthermore, in an April 2 interview with Al-Mayadeen television, Chalabi harshly criticized the government’s security, economic and monetary policies.

One aspect of the ongoing competition between the Citizen and State of Law coalitions is their respective attempts to portray themselves as having close ties with Shiite religious authority figures, who still represent the main spiritual and moral driving force within the Shiite community. Toward that end, Citizen Coalition leaders headed by Hakim visited Shiite cleric Bashir al-Najafi, after the latter suffered from an illness, to portray themselves as enjoying a special relationship with him. Najafi is one of the most outspoken Shiite clerics against Maliki. The Citizen Coalition’s official website also rushed to publish a fatwa issued by Shiite Grand Ayatollah Ali al-Sistani, which was interpreted as disapproval of the prime minister’s claim that Sistani held him in high regard.

Furthermore, in the past two years, the ISCI endeavored to rebuild its relationship with Iran, which was greatly damaged following the death of its former leader. With that end in mind, Hakim visited Tehran in October 2013 and met the Iranian Supreme Leader Ayatollah Ali Khamenei with the purported aim of regaining Iranian support or encouraging Iran to adopt a neutral stance toward the current prime minister. Iranian support will be critical should the Citizen Coalition pursue the premiership.

On April 5, the Citizen Coalition launched its electoral campaign in a lavish ceremony attended by ambassadors, journalists and dignitaries. Afterward, the coalition announced its electoral program, which represented an unusual step in Iraqi politics, as it was characterized by precision and sophistication, suggesting that it was drafted following careful consideration. The program focused on economic and developmental issues, proposing the adoption of new policies built around a true decentralized economy, the restructuring of public institutions, the diversification of income sources, backing the private sector and improving the petroleum policy.

Irrespective of whether the Citizen Coalition is able to implement those promises, the formulation of the program suggests that the coalition adopted a high degree of professionalism in the management of its electoral campaign.