Iran would prefer that Nouri al-Maliki serve a third term as Iraqi prime minister, but will also give priority to a consensus among the Iraqi Shiite parties. 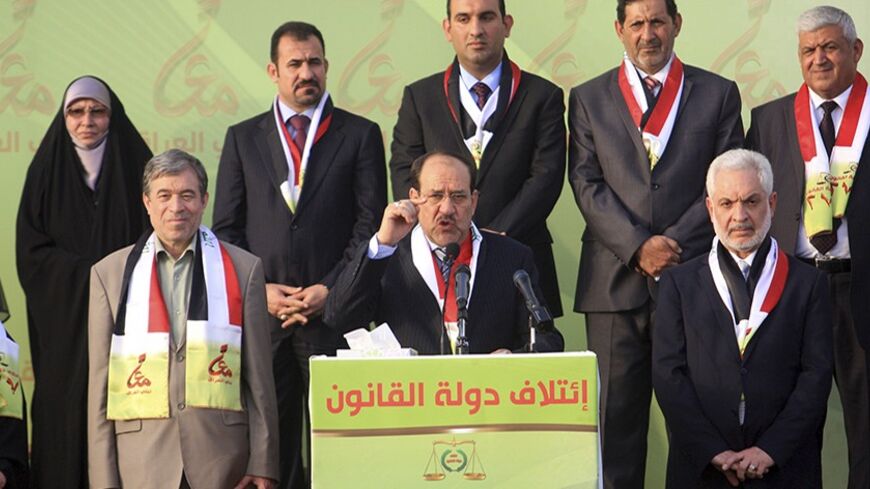 Iraq's Prime Minister Nouri al-Maliki speaks to his supporters during a ceremony to announce his election platform as well as promote candidates of State of Law coalition in Karbala, southwest of Baghdad, April 17, 2014. - REUTERS/Mushtaq Muhammed

Iraqi Prime Minister Nouri al-Maliki has received direct and ongoing support from Iran during the eight years of his mandate, and has maintained excellent relations with Tehran throughout this period. He refrained from criticizing the Iranian regime while he was making scathing comments against [other] countries involved in the situation in Iraq. Maliki did not express any opposition to Iran’s requests regarding Iraqi domestic issues, nor to those involving the country’s foreign affairs that are linked to Iran’s interests in Syria and other countries.

During the 2010 elections, Iran insisted on supporting Maliki and forced its allies from other Shiite parties to join hands in order to bring him to power for a second time, despite their strong objections and the objections of non-Shiite parties. Iran showed a tendency, before the elections, to keep Maliki in office for a third term, and there have been many negotiations in this regard.

Al-Monitor learned from a source close to the Iranian Embassy in Baghdad that [commander of the Quds Force] Qassem Soleimani came to Baghdad weeks prior to the elections to try to generate support for a consensus among Shiite party leaders — including those from Maliki's Dawa party, the Islamic Supreme Council of Iraq led by Ammar al-Hakim and the Ahrar bloc led by Muqtada al-Sadr — in support of Maliki, but the leaders of the other parties resisted the effort.

Grand Ayatollah Ali al-Sistani and other clerical leaders in Najaf have rejected an initiative to build consensus around Maliki serving a third term as prime minister, according to sources in Najaf. Follow-up meetings in Iran by Iraqi delegations from the Shiite parties were unsuccessful.

Iran started to show some flexibility about the next prime minister shortly before the election. The new Iranian website Tabnak, which is close to some powerful parties within the Revolutionary Guards and the Expediency Discernment Council of the System, issued a report on the status of the elections in Iraq on April 23.

The report, titled “Maliki is not accepted by anyone in Iraq,” highlighted the size of objections to a third term by the Shiite authority in Najaf, in addition to Shiites affiliated with Hakim and Sadr, Kurds, the secular forces, as well as many Sunnis.

Iranian Ambassador to Iraq Hassan Danaei declared a few days before the elections that Iran supports the demands of the Shiite authority for change.

Also, following the reaction against Grand Ayatollah Sheikh Basheer Najafi’s stance, Danaei said Iran rejects all forms of prejudice against the authority. Najafi had previously criticized Maliki's performance ahead of the elections, and had strongly demanded that people not vote for him. This resulted in harsh criticism from Maliki’s close associates.

In addition, Iranian news sites held interviews with Ayad Allawi for the first time, and these types of interviews cannot be usually conducted and published without security approval. Allawi has accepted Iran’s direct and extensive role in Iraqi decisions, and demanded that the Iranians watch over the interests of Iraqis alongside their nationalist interests. He also said that he was stunned by Iranian rejection of his gaining power, as he is not hostile to Iranians and is ready to cooperate with them on the Iraqi issue.

Nevertheless, reports indicate that Iran wants to keep Maliki in his post, based on the logic that it is more important to keep your old friends than it is to make new friends that you have not yet tested. Iran is certainly not interested in Maliki as a person, but rather in its own interests in Iraq as a country and as a safe crossing to support Syria. This means that it will not oppose a reliable replacement of Maliki to the post of prime minister, in case Iran's other allies insist on it. There is more than one person who can be accepted by Iran among the candidates of the two main lists of the Shiite alliance, namely the State of Law Coalition and the Citizen Coalition.

On the other hand, a desire to revive the Shiite alliance immediately after the elections has emerged, after the failure of a plan to form a majority government that Maliki advocated, and after his rivals could not win the number of seats that would have enabled them to take the State of Law Coalition out of the equation. Based on that, there seems no other way to reach an agreement among Shiites; new alliances could be made with the Kurds and Sunnis, seeing how difficult it will be to secure the majority required to form the next government without any of Maliki’s supporters and rivals.

In addition, the Shiite authority and Iran insist on preserving the unity of the Shiite front in order to guarantee the political interests of the largest Iraqi component. At the same time, the parties concerned have started to unofficially suggest figures to succeed Maliki in private political corridors in order to check the reactions of the other parties.

Under such a contradictory atmosphere, it seems most likely that the main Shiite parties will agree on a consensus candidate who meets Iranian standards and who is not rejected by the Kurds in any way. When Shiites, Kurds and Iranians agree on a single candidate, it should be easy to find a Sunni ally given the divisions Sunnis are witnessing.