The Iraqi parliamentary elections are showing a deep division among the Shiite community, with rising tension between the Shiite religious authorities and Prime Minister Nouri al-Maliki. 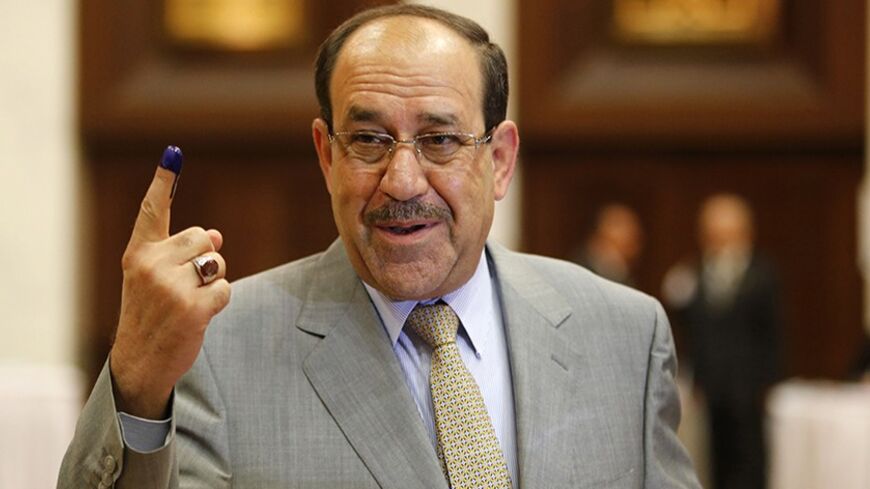 The Iraqi newspaper Al-Alam published a report on May 6 in which it indicated that the statements of Ayatollah Bashir Najafi, who is one of the four prominent religious authorities in Najaf, was not an isolated event. In the details, Najafi had called on Iraqi voters to refrain from voting for Prime Minister Nouri al-Maliki. The newspaper reported from a source close to the religious establishment in Najaf that the son of Najafi, Sheikh Ali al-Najafi, urged voters to support the Citizen Coalition led by Ammar al-Hakim during his visit to the south, with the elections just around the corner.

Although the strong stance of Najafi against Maliki, only a few days before the elections, surprised many people, the political and religious circles were already aware of the tension between the two men that had been implicitly expressed in previous statements and insinuations.

It seems that Najafi reproaches Maliki for not heeding the authorities' advice, including the advice of “replacing the school curricula to better reflect the Shiite perspective.” Najafi also thinks that Maliki has failed to address the security situation in Iraq. Although many expected Najafi’s call to have a negative effect on Maliki’s chances in the elections, the information that has been leaked so far about the results of the elections do not show that these statements brought any radical changes to the political balances. This is probably because they were not supported openly by the supreme religious authority, Ali al-Sistani, who maintained his stance of calling for the participation in the elections and “choosing the best candidate.” Sistani did not reveal any clear bias toward any of the competing forces. Moreover, Najafi does not have a huge number of followers in Iraq, and some of his statements were not convincing enough or seemed inconsistent.

Despite this, a sort of tension between Maliki’s government and the Shiite religious institution in general can be felt. This was reflected in several of Sistani’s stances: Sistani boycotted a meeting with all governmental officials and sent out a call for change to the Iraqi voters. While the elections were getting closer, he also welcomed the leader of the Sadrist movement, Muqtada al-Sadr, who is known for his strong criticism of Maliki. Moreover, Sistani made a statement that implicitly denied Maliki’s allegation that the grand ayatollah holds him in high regard and shares with him the discontent with the rest of political class.

A Shiite politician told Al-Monitor, on condition of anonymity, that Sistani thinks that the country’s problems would only be exacerbated if Maliki remained in power or is replaced by another leader from one of the main Shiite parties. Even if Maliki secures a third term, his adversaries will obstruct him. They will reluctantly accept his re-election, but they will try to move him aside or weaken him by whatever means.

Meanwhile, Maliki will be wary of all the other parties that he strongly criticized during his electoral campaign. He even noted his wish during a TV interview with Al-Manar on April 20, that the entire political elite be changed for the state to be built on strong pillars.

In contrast, finding an alternative figure based on a new partnership agreement will mean repeating the experience of the fragile government that is divided into fiefdoms of conflicting political parties.

According to the same Shiite politician, the authorities want an independent figure from outside the traditional Shiite forces, one who enjoys the support of Shiites and a relative degree of autonomy to work away from the conflicting interests of the parties.

Despite the reluctance of Sistani to intervene in the public political conflict, a number of factors lead one to believe that he will continue to play a role in the next phase. In fact, Sistani believes that he assumes a moral responsibility that requires he not let the conflicts worsen to the extent of the collapse of the political system or the disintegration of the country. Moreover, the growing power of the prime minister and affiliated forces may have made Shiite religious figures feel that they are gradually losing their leadership role in the Shiite community.

For the first time in the history of modern Iraq, there is a government led by an Islamist Shiite figure who is more confident about his ability to have political and social influence through the state’s power and resources, without the need of Najaf’s protection, as happened in the first elections witnessed by the country in 2005, when forces such as the Islamic Dawa Party and the Islamic Supreme Council had limited constituencies.

It could be argued that the recent parliamentary elections saw further separation between the “political Shiism” represented by Maliki's coalition and his allies on the one hand and the “religious Shiism” on the other.

The rapprochement that took place between Hakim and Sadr (both belong to prominent religious families of Najaf that had a history of leadership rivalry), and then Najafi’s video supporting for the Citizen Coalition and his criticism of Maliki, suggest that the Shiite religious forces feel more threatened by the growing strength of the Shiite prime minister. The latter has built a nonreligious Shiite coalition and has successfully woven a network of wide pragmatic and interest-based alliances in the government bureaucracy, the military establishment and with some new businessmen.

Such tension suggests that there is a split within the community between a state party, whose composition is similar to many ruling parties in developing nations and which command broad resources secured by oil revenues and used in political patronage, and traditional religious forces and families that feel their resources and ability to achieve social mobilization are both decreasing.

Such division explains the religious leaders’ skeptical attitude toward Maliki, which may consequently result in stiff resistance to his continuation in power. This means that the intra-Shiite rivalries will largely decide the path that the country will take after the elections.