Following the death of Grand Ayatollah Sayyed Mohammed Saeed al-Hakim, one of Iraq’s most senior and influential Muslim Shiite clerics, the family lost one of its sources of religious, social and political power. 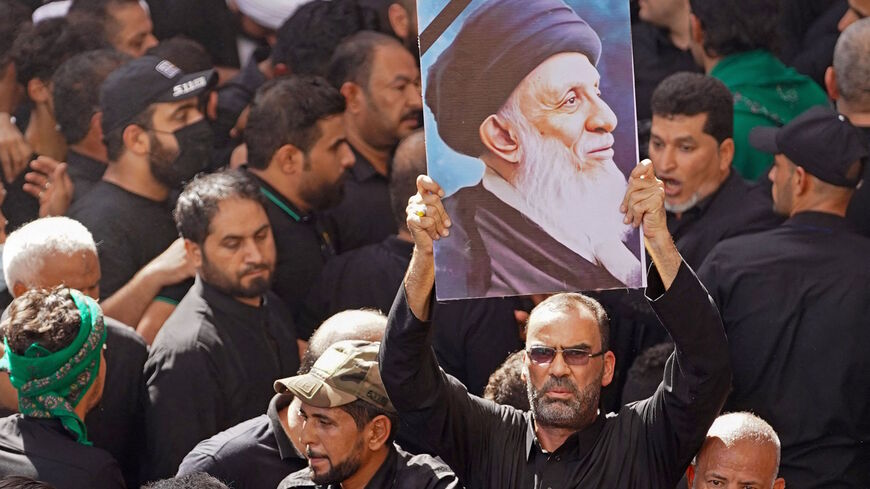 The death of Shiite religious authority Grand Ayatollah Sayyed Mohammed Saeed al-Hakim on Sept. 3, one of the Iraqi Shiite community's most respected leaders, highlighted the relationships and rivalries of Iraq's clerical leadership.

The late grand ayatollah was one of the four main authorities along with grand ayatollahs Ali al-Sistani, Bashir al-Najafi and Muhammad Ishaq al-Fayyad.

His grandfather was also a religious authority, and the family has maintained political prominence in the country over the past century.

The passing of the ayatollah also highlights the rivalry between the influential Hakim and Sadr clerical families in Najaf.

Although the Sadr family does not have high religious authority in the city, Muqtada al-Sadr nonetheless is popular among impoverished and low-educated Shiite communities in the south. He has a political party and military faction, which gives him the potential and ability to compete with powerful clerical families like the Hakims and the Sistanis.

Therefore, the ayatollah's death may not be a loss for the house of Hakim alone but also for Shiite politics in general.

Moreover, he was a candidate to succeed Grand Ayatollah Ali al-Sistani.

Harith Hasan, a nonresident senior fellow at the Malcolm H. Kerr Carnegie Middle East Center, told Al-Monitor, “The symbolism of the Hakim family will be affected by the family losing one of its members.”

Hasan said the departure of such a prominent clerical figure could be interpreted as a sign of declining influence, which “started with the death of [religious] authority Mohsen al-Hakim, the migration of his sons out of Iraq, and the rise of the Sadr family and its influence over Shiite segments."

He noted “the balances will change with the death of the grand ayatollah. The conflict with the Sadr family has been ongoing for years. The presence of an authority from the Hakim family provides the family with a sort of political immunity, even though the late ayatollah did not interfere in politics.”

Members of the Hakim family have served as leaders of Iraqi political parties such as the Islamic Supreme Council of Iraq, which was led by Muhammad Baqir al-Hakim, his brother Abdul-Aziz al-Hakim and then his son Ammar, who defected from the party and formed in 2017 the National Wisdom Movement, which is known for its unconventional, youthful character.

The political movement that was affiliated with the Hakim family was the largest Shiite political bloc opposing the former regime and had an important political share at the Shiite level in Iraq after 2003. This share gradually shrank after the emergence of other competing religious families such as the Sadrs and other Shiite parties such as Dawa.

Members of the Hakim family have served as religious and political symbols since the 1980s, the last of which was Grand Ayatollah Sayyed Mohammed Saeed al-Hakim on the religious level and Ammar on the political level.

After the death of the most influential religious figure of the family, Ammar becomes the family’s sole symbol. He may be affected by the departure of the late Shiite ayatollah who kept the family among the four major authorities in Najaf, which is the stronghold of the Shiite religious seminary in the world.

Although politics and religion are two different things in the behavior of the Hakim family, the departure of its most prominent religious and social member will leave a clear impact on the strength of the political movement emanating from this family. This is especially true since the popular political base of Ammar consists of the followers of this religious authority in Najaf. Thus, his death will certainly affect the size and strength of the political movement as well.

However, the death of Hakim will not immediately impact Shiite politics, according to Abbas Kadhim, director of the Iraq Initiative at the Atlantic Council, as Shiite politics in Iraq is complex and affected by different factors.

While Hakim’s departure will not outwardly affect Shiite politics, it may have an impact on hidden conflicts, especially those conflicts between the big families in Najaf — particularly between the Hakim and Sadr families.

However, moderate Wisdom Movement leader Ammar had prepared the movement for such moments to distance the conflict or at least mitigate it in a way that does not affect his political project. He worked in the previous years to expand the movement's political base by turning toward the civil movement and youth groups, a large number of which joined this political movement.

Despite the abovementioned, the political power of the Hakim family is still largely based on the strength of its presence in Najaf as a religious metropolis and the family’s influence on its decision. This means they are now facing a big challenge related to their ability to maintain their presence and influence and to prevent competing forces in Najaf from excluding them.

So Ammar is now facing two struggles: One is the political struggle of winning the elections in which he raised the banner of the Alliance of National State Forces. The other is the family's struggle to place a family figure among the four authorities in Najaf. For him and the Hakim family, the religious presence must be equal to the political presence.

Ammar has shown deft leadership. His previous experiences point to his ability to manage crises, especially when he took the risk and split away from the Islamic Supreme Council of Iraq and entered into a confrontation with its hawks, who accompanied his uncle and grandfather within Iraqi opposition ranks for nearly four decades.

One can say the Shiite political scene has actually incurred a loss with the death of the grand ayatollah — not because he is from a family that has a political party, but because he was the anticipated successor of Sistani, who is described as the safety valve and the point where Shiites meet regardless of their various orientations and affiliations with this religious authority.