The bill would give near-absolute powers to Iraq Prime Minister Nouri al-Maliki and is filled with loopholes and vague language. 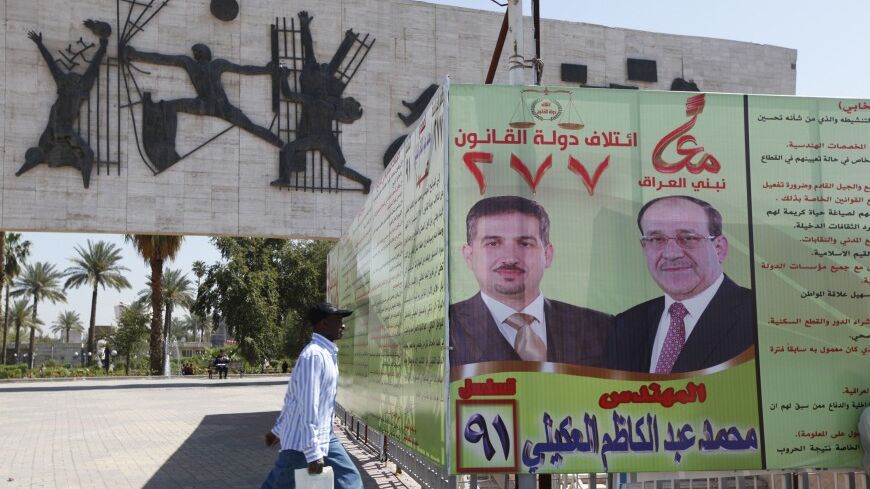 On April 4, the Iraqi Council of Ministers endorsed the “national safety” bill, which regulates the state of emergency and defines the prime minister’s powers and the steps he can take during “emergency” measures, which mostly fall under “martial law.”

However, the bill sparked a controversy when it reached parliament and was published. Most of the debate focused on fears that “the law could be abused by the government to liquidate its opponents,” according to former Vice President Adil Abdul-Mahdi, who pointed to a number of deficiencies in the bill’s mechanisms and loopholes.

Other political parties wondered why the bill was proposed just ahead of the elections, and suspected that the timing pointed to Prime Minister Nouri al-Maliki’s intention to cancel the elections and dissolve parliament.

Raising suspicions further was the fact that the bill, which requires a two-thirds vote in parliament in accordance with Article 61 of the constitution, is being put forth at a time when parliament is unable to hold a regular session to approve the budget. This prompted the parliament’s rapporteur, Mohammed al-Khalidi, to say, “The government sending the National Safety Law to parliament is evidence of [its] failure to provide security, which it hasn’t achieved in the last 10 years.” He expected the bill to be moved to the next session.

According to Paragraph 9 of Article 61 of the Iraqi Constitution, parliament has the power to “declare war and a state of emergency by a two-thirds majority, according to a joint request from the president of the republic and the prime minister,” and stipulates that “a state of emergency shall be declared for a period of 30 days, which can be extended, upon approval each time,” and that “the prime minister shall be delegated the necessary powers that enable him to manage the country's affairs during the period of the declaration of war and the state of emergency. These powers shall be regulated by law in a way that does not contradict the constitution.”

The bill mixes between environmental disasters and terrorist threats in an open-ended text. In Article 2, Item 1, the bill conditions declaring a state of emergency on whether “the Iraqi people are threatened by a grave danger as a result of terrorist acts carried out by armed or unarmed groups.”

This text leaves the term “grave danger” open to interpretation, and the same case applies to later articles, which stipulate: “If there is a serious disorder or a serious threat to public security … or any military or non-military action that threatens the peaceful transfer of power in accordance with the provisions of the constitution, … or if there is an epidemic or a public disaster … or a declaration of war or a threat to declare war, … or if the state or any part of the state is exposed to any aggressive military action that threatens the integrity of Iraq.”

Iraq has been living under a terrorist threat for more than 10 years, and any terrorist movement is a “grave danger” that “threatens the peaceful transfer of power” because it is “a serious disorder to public security.” Those provisions apply to Fallujah today, and they also apply to Buhriz, Suleiman Bek, parts of Mosul and parts of Baghdad.

A generalized description is not a problem in itself, as long as the law itself requires the approval of parliament to declare a “state of emergency” as part of a joint request from the president and the cabinet.

But the text that regulates a “declaration of emergency” is ambiguous. Article 3 of the bill stipulates: “The request to declare a state of emergency be submitted to parliament jointly from the president and prime minister. Parliament will meet to consider the request, in accordance with the provisions of the constitution, within seven days from the date after [the bill] is registered in the office of the speaker of the house.”

Article 4 stipulates: “The decision of parliament to approve a state of emergency is sent to the president of the republic and the prime minister within 24 hours from the time of issuance.”

But the law ignores the mechanisms and procedures that apply if parliament doesn’t approve the request to declare a state of emergency.

More importantly, the law deals with all the requirements of a state of emergency according to a single standard. Not all disasters and not all security challenges should grant the prime minister absolute powers of “martial law,” as Article 8 stipulates. That article details those powers and grants the government power to restrict the freedom of movement, arrest suspects, impose house arrest on dangerous people, restrict the freedom of people to meet, break up meetings and gatherings by force, release some parties, isolate others, prevent travel to and from the country, censor the media, censor foreign newspapers, seize and prevent circulation of newspapers, impose controls on essential commodities and order people to work. According to the bill, anyone who violates the prime minister’s orders during the period of emergency can be imprisoned, fined or both.

The emergency bill has several deficiencies, gives absolute powers to one person and has been put forth at a peculiar timing, which raises many questions and requires great care in dealing with the law before it is amended or approved.