New coalitions of moderate religious and secular origins could bode well for Iraqi politics and shake up the April 30 elections. 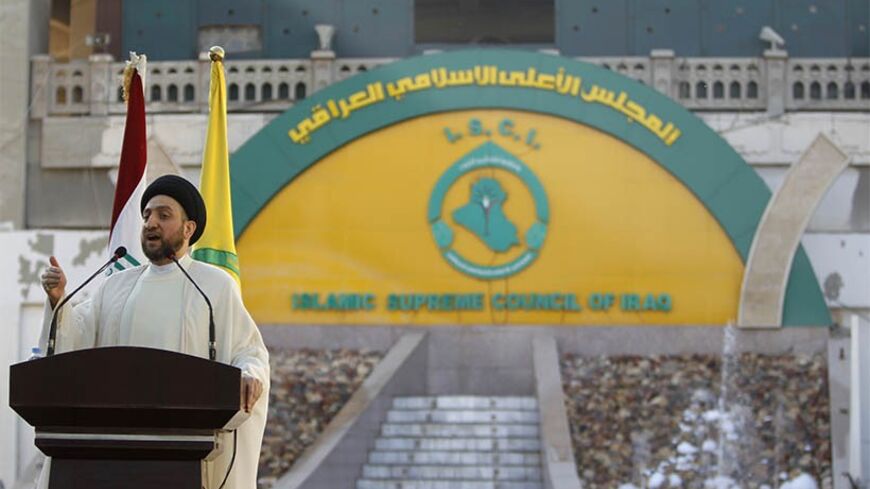 Ammar al-Hakim, leader of the Islamic Supreme Council of Iraq, gives a speech during prayers in Baghdad, Oct. 16, 2013. - REUTERS/Saad Shalash

During the post-2003 era, secular and Islamic movements in Iraq have offered different proposals for their country, ravaged by decades of wars, blockade and tyranny. The secularists soon realized, however, that they could not adequately compete with the Islamists, who were supported by neighboring countries and enjoyed large popular bases. Thus, Sunni and Shiite religious parties came to control Iraqi politics.

This situation has led some secularists to take on an Islamist image to win elected seats. Others, however, abandoned politics entirely, as was the case with the veteran politician Adnan Pachachi in 2005, while others temporarily left politics, such as Mithal al-Alusi after the killing of his children in 2005 and his ouster from the Iraqi parliament in 2008.

Although Iraq has been under the rule of the Shiite National Iraqi Alliance, the last eight years have shown that the Islamist movement within the alliance does not have a homogeneous identity or common policies for governance. Moreover, each party within the alliance has developed its own vision through experiences during this period, which has led to divisions and the emergence of various coalitions. Recent developments point to the complete collapse of the alliance, although this has not officially been announced.

When studying the inclinations of the new coalitions, one can see that a huge rift has developed between the moderates and extremists. The Badr Organization, which is directly linked to the Iranian Quds Force, split from the Islamic Supreme Council of Iraq in 2012, after the latter had founded the organization and supported it. Moreover, moderate members split from the State of Law Coalition to join the Citizen Coalition, after the former moved toward religious extremism and monopolization of power, not to mention its long record of failure in governance and corruption.

The Islamic Supreme Council has since adopted a civil political vision, gradually moving away from the ideology of political Islam upon which the council was initially founded. This has been particularly true since Ammar al-Hakim assumed leadership of the council. Hakim brought a breath of fresh air to the council, rejuvenating its structure by introducing young cadres with civil inclinations.

Hakim's initiatives also led to the formation in March of the large Citizen Coalition, led by Hakim and comprised of various civil powers and the moderate Islamic movement, a first of its kind alliance in post-2003 Iraqi elections. There are thus clear signs of a rapprochement between the moderate Islamic movement and secularists, whereas in the past they ran on separate electoral lists because they did not have anything in common in terms of sloganeering and platforms. This time around, however, in addition to common slogans and platforms, there are secularist candidates within Hakim’s Islamic movement. In fact, the coalition named known secularists, including women, some of whom are unveiled, as candidates as part of its unprecedented initiative.

The new course set by the Citizen Coalition has elicited a number of reactions. Rival and radical movements have tried to use it to taint Hakim's image, painting him as religiously uncommitted. Secularists and moderate Islamists, however, have welcomed the move, considering it a necessary act of openness toward the other, which at the end of the day works in the best interest of Iraq and its citizens. A strong secularist movement, the Civil Democratic Alliance, has also made an impression in the lead-up to the April 30 elections. This alliance consists of renowned civil and professional figures with long histories in economic, social and political work.

To understand the possible course of the elections, one must consider two factors. First, there is no possibility for a united Shiite coalition, even if Iran pushes in that direction. Rather, Shiite authorities and the rival powers of Prime Minister Nouri al-Maliki have agreed to remove the incumbent from power. Second, there is an important change in the electoral competitiveness map. That is, the role of religious identity has weakened in favor of political divisions on the basis of visions, goals and methods. Just as the Shiite alliance collapsed, and movements with different political visions surfaced, the same happened within the Iraqiya List, which formerly comprised the majority of Sunni powers.

The result of these two developments is that the alliances likely to emerge following the elections will be based on common general visions and policies, not just religious identity. This means that there is an opportunity for a coalition comprised of the Citizen Coalition, the followers of Muqtada al-Sadr, and the Civil Democratic Alliance. This will be considered a positive development in the political process in Iraq and will positively affect security and services, bridge divisions and ease the ongoing sectarian conflict.