The United States shipping Apache helicopters to Cairo, and the European Union decision to monitor coming presidential elections in Egypt, are signs that the US and EU are switching their Egypt policies. 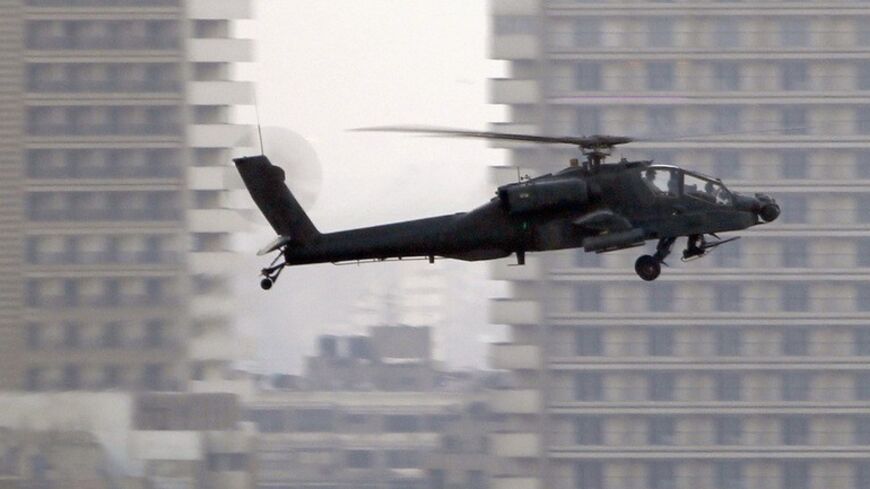 An Apache helicopter flies over Tahrir Square during a protest to support the army, in Cairo, July 26, 2013. - REUTERS/Amr Abdallah Dalsh

There are many signs that the United States, European Union and other international players are gradually shifting their positions to align themselves back with Egypt. After months of postponement and conflicting messages, the United States will finally deliver 10 Apache helicopters to Egypt ahead of Egyptian Foreign Minister Nabil Fahmy's official visit to Washington.

Earlier this week, news leaked that Cairo is hosting a Russian delegation to discuss the purchase of 24 MiG-35s, Russia’s top fighter jet, not sold as of yet to any other country. The original $3 billion arms deal, announced in February, detailed Egypt buying Russian MiG-29s and Mi-35 helicopters. To now include MiG-35s is definitely a step that could have worried Washington.

US Secretary of State John Kerry told Fahmy prior to his visit to Washington that he is "certifying to Congress that Egypt is sustaining the strategic relationship with the United States," although Kerry is "not yet able to certify that Egypt is taking steps to support a democratic transition." Kerry has consistently tried to mend relations and downplay differences, possibly fearing that a tough stance — especially over supply of US arms to Egypt — would send Egypt shopping for military hardware from Russia and China.

The last few months saw several reciprocal visits between Russian and Egyptian military officials, including a much publicized visit of Abdel Fattah al-Sisi himself to Moscow just before his resignation as minister of defense. During the visit, and even before Sisi officially announced his candidacy for Egypt’s presidency, Vladimir Putin supported the move “personally and on behalf of the Russian people.” Fahmy explained that Putin’s words were meant to support Egypt and its people, not Sisi per se.

On April 9, Washington announced its terrorist designation of Ansar Bayt al-Maqdis, which claimed responsibility for several terrorist attacks against Egyptian security personnel and army facilities that killed and injured hundreds. The Egyptian government maintains that Ansar Bayt al-Maqdis is closely linked to the Muslim Brotherhood, an accusation denied by the Brotherhood. In a statement last July, Mohamed el-Beltagy, a leading member of the Brotherhood, said that terrorist attacks against the army and the police in the Sinai Peninsula would cease once Mohammed Morsi was reinstated as president.

The British prime minister ordered an investigation of Muslim Brotherhood operations in the United Kingdom. In response, Ibrahim Mounir, the most senior Brotherhood officer in the United Kingdom, implied in an interview with the Sunday Times that if the government designates his organization a terrorist entity, this could expose the UK to terrorist attacks. Tony Blair, former British prime minister and Middle East quartet envoy, urged British intervention and global cooperation between the United States, Europe, Russia and China against Islamist extremists around the world. The UK is home to some of the most extremist Islamists, many of whom expanded their influence using mosques that propagate a “3D Islamist worldview” and a fanatic ideology among unsuspecting Muslim and immigrant communities.

The EU is also moving along. On a trip to Egypt, EU foreign policy chief Catherine Ashton met interim President Adly Mansour and Sisi, as well as other officials from one camp: the one that supports the current road map. Ashton attributed not meeting the Brotherhood to "logistical difficulties." During the visit, Ashton finalized an agreement on an EU election observation mission for the forthcoming presidential elections. Ashton noted “the growing concerns about the death penalty notices as well as the detention of journalists and activists." Such concerns clearly came second to the EU’s keen desire to get back on the track of close cooperation with Egypt. This prompted Alastair Sloan to pose the question on Al Jazeera: "Is the EU legitimizing Sisi's coup?" He accused the EU of putting trade above human rights and democratic values. The EU further announced it would not be financing the Ethiopia Renaissance Dam, according to a report by Egyptian state news agency MENA.

Headlines of Al-Masry al-Youm, Egypt’s leading independent daily, hailed what it saw as “Egyptian Diplomatic Victories in the US, Africa and Europe,” citing the Barack Obama administration’s demanding Congress release $650 million of the total $1.5 billion aid allocated to Egypt; an announcement by Greece, currently chairing the EU, of its full support for Egypt's efforts to implement the road map; and a comment made by a Ugandan minister suggesting that his country will not support construction of the Ethiopian Renaissance Dam if studies confirm that it harms Egyptian interests.

While it may be premature to celebrate these “victories,” especially with Egypt’s membership in the African Union still suspended, it is clear that the international players are switching their positions — even if uneasily — to align themselves back with Egypt. Why? Is it because the nature of politics is inherently Machiavellian, and governments must eventually put interests above values? Is it because of pressure applied by the Saudi government, which has taken a tough stance against its former protege the Muslim Brotherhood? Given current events in Ukraine, and with Egypt and Russia suddenly rekindling their lost love, is it the Cold War all over again? Or are the United States and EU finally seeing the dangers of Islamist politics, its close links with international terrorism and the need to support the "secular revolution" in Arab countries?

It is hard to imagine that the United States and EU are oblivious to the dangers of Islamism. So, what changed?

For many years, think tanks told US policymakers that Islamist movements’ popularity meant they were poised to rule the Middle East sooner or later. Policy recommendations suggested it would be foolish and damaging to Western interests to ignore, or worse, to antagonize, Islamists. Within days of the initial protests of Jan. 25, analysts advised the US administration to quickly align itself with the future rulers of Egypt, although the Brotherhood had scarcely participated in the revolution. Abundant evidence gathered by intelligence agencies shows close links between even so-called moderate Islamist organizations, such as the Muslim Brotherhood, and terrorist networks. It shows how each plays their respective parts in the “good-terrorist-bad-terrorist” game, making an appeasement policy appear to be the best feasible strategy. This could have been understandable until the Brotherhood was removed from power in Egypt after the massive June 30 protests. This time, the same analysts advised that it would not be possible for the interim authority to sustain the government without the Brotherhood. The Islamists did their best to provide evidence to support this advice through continued protests, violent clashes and terrorist attacks. As time passed, it became clear that Islamists, despite their undeniable capabilities, resources and fire power, are unable to acquire the critical mass necessary to derail or even halt the procession.

Simply put, the parade was moving away, and the United States and EU had to catch up to avoid being totally left behind.