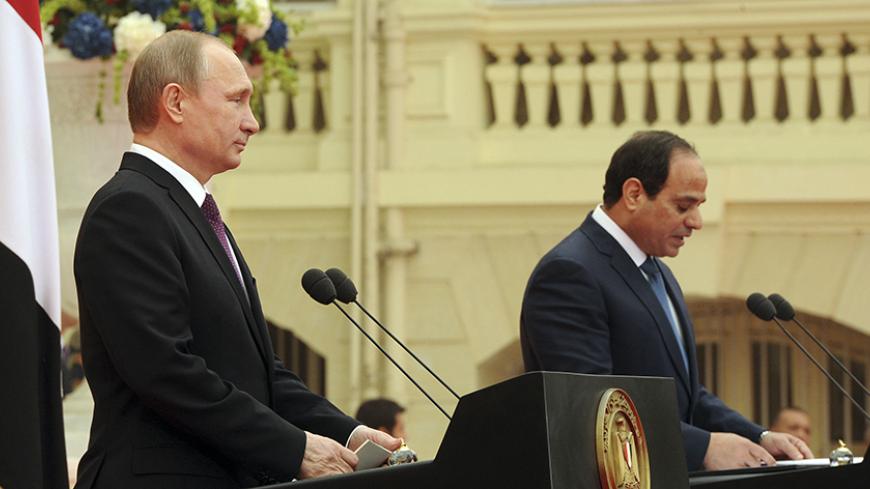 Between Feb. 9 and 10, Russia’s President Vladimir Putin paid an official visit to Egypt, thus reciprocating an August 2014 Russia visit by Egyptian President Abdel Fattah al-Sisi. Shortly before Putin’s trip, Moscow's analyst community suggested that the Russia-Egypt relationship might be elevated to a strategic partnership. The makings of such a shift included the parties’ shared positions on a number of regional issues; closely aligned interests (particularly on fighting international terrorism); a successful track record of bilateral cooperation on various fronts; and a strong personal bond of trust between respective leaders.

The reader may be reminded that Moscow took time to lean toward support for the Egyptian military, which had assumed power through an unprecedentedly large-scale manifestation of the popular will. However, the waiting game did not take long, as Russia’s orientation toward support for Sisi in every possible way became obvious following Sisi's electoral victory. Already in 2014 trade and economic cooperation between the two nations developed at a brisk pace. According to Egyptian Ambassador to Russia Mohammed al-Badri, who described Russia-Egypt ties as “picking up” across all areas of cooperation, last year’s trade between the two countries stood at $3 billion. Meanwhile, Russia’s Federal Customs Service cites an even higher figure of $4.6 billion between January and December, including $4.1 billion in Russian exports. Notwithstanding certain misgivings about Egypt’s security situation and an overall drop in the number of Russian nationals traveling abroad, more than 3 million Russians toured the country last year. In fact, Egypt’s Tourism Minister Hesham Zazua has gone as far as to propose that settlements with Russia in this sphere may be carried out in Russian rubles and Egyptian pounds, thus bypassing the dollar. Given Russia’s sizable trade surplus, this does not appear implausible.

As Yuri Ushakov, an aide to the Russian president, told the press Feb. 5 that Egypt and the nations of the Eurasian Economic Community had agreed to set up a free trade area working group, and “a decision had been made to establish an appropriate research team that would examine this topic. Its first meeting will be held in Cairo in March or April this year.”

As Putin told Egypt’s Al-Ahram daily Feb. 8, “We have established mutually beneficial and effective cooperation in the field of agriculture. Egypt is the major buyer of Russian wheat, Russia provides about 40% of grain consumed in that country; as for us, we import fruits and vegetables.” According to the president, Russia “sees promising prospects in the field of high technology, particularly in the areas of nuclear energy, outer space use and sharing of Russia’s GLONASS satellite navigation system.”

To Cairo, this continued rapprochement with Moscow is taking place against the background of a difficult relationship with Washington. Indeed, when Barack Obama’s decision to invite Sisi to the White House was announced on July 14, 2014, Sisi excused himself and sent his prime minister instead, reminding observers of an interview he granted to Larry Weissman back in 2013. At the time, Sisi stated much more bluntly: “The people of Egypt are aware of the fact that the USA has stabbed Egypt in the back with the Muslim Brotherhood and [Mohammed] Morsi. It is nothing that Egypt will easily forget, or forgive.” On Oct. 24, 2014, the Russian website Inosmi quoted from an article titled "Egypt gets ready for Putin’s visit" published in the UAE daily Al-Bayan, which said: “As opposed to actions taken by Washington that considers a terrorist organization involved in pillage and looting as the lawful government and denounces its ouster as a coup, Russia is not ready to compromise, for it unabashedly calls a spade a spade.”

The Egyptian leadership was particularly peeved by the January 2015 tour of Washington taken by an Egyptian opposition delegation, including members of the Muslim Brotherhood's Freedom and Justice Party. They were received at the Department of State, according to political consultant Christof Lehmann. I do not believe, however, that Egypt will further strain its relations with the United States, for it badly needs US assistance.

Egypt’s cooperation with Russia will, to a substantial degree, depend on whether Western nations continue to support Sisi financially. (Given the difficulties that Russia is facing on its own as a result of the sanctions and the oil price collapse, it is unlikely that it will shoulder the burden of pro bono assistance to Cairo.) Without the strong financial sustenance that Gulf countries such as Saudi Arabia, the United Arab Emirates and Kuwait provide to it, Egypt would be clearly unable to pay for Russian weaponry and military hardware imports, estimated by the media to total $3.5 billion last year already, including rotary and fixed-wing aircraft, as well as air defense systems. It remains unclear what kind of aftershocks Egypt and the balance of power within the region at large would experience as a result of the “Saudi earthquake” that followed royal succession in the kingdom.

David Hearst, editor-in-chief of the Middle East Eye, believes that “it is not a good time for the Egyptian army to lose its chief bankroller in Riyadh, but this now is a real possibility.” In his opinion, the Saudi policy of declaring the Muslim Brotherhood a terrorist organization may also be about to change, as evidenced, in particular, by Rachid Ghannouchi’s arrival in Riyadh to express his condolences on the passing of King Abdullah bin Abdulaziz, and by the removal of Suleiman Ab Al-Khail, an arch opponent of the Brotherhood, as minister of endowments and Islamic affairs.

A vast field for cooperation has opened up for Cairo and Moscow, as each party has redoubled its efforts to mediate a settlement to the Syrian conflict. Prior to the advisory meeting of Syrian opposition, civil society and government representatives held in Moscow between Jan. 26-29 — the first meeting of its kind — opposition figures met in Cairo, even though no Syrian government delegation was there. I would not rule out a situation whereby, as a result of the Russian president’s visit to Cairo, the parties might agree to pool their forces in the context of a Syrian settlement. This would doubtless boost the chances for a successful resolution of this conflict.

Still, the fight against international terrorism remains key to the political engagement of Moscow and Cairo. The Jan. 29 Sinai Peninsula attack against the Egyptian army by terrorists from the Wilayat Sinai organization (formerly known as Ansar Bayt al-Maqdis), which has pledged allegiance to the Islamic State, dealt a blow to Sisi. According to a February 2015 assessment by the Middle East Briefing, that attack “has increased the general sentiment in Egypt that the government of Sisi is unable to control the deteriorating security environment.” In addition, Sisi accused the Muslim Brotherhood of conducting a campaign of terror. Plus, the Egyptian authorities suspect that the terror attack was “aided by foreign special services.” Tellingly, a Muslim Brotherhood communique issued on the attack day promised to “intensify the jihad” against the government, according to the Middle East Briefing. In this context, cooperation with Russia that, like Egypt, views the Brotherhood as a terrorist organization, receives a strong impetus.

By pursuing its “new partnership” with Egypt as a key Arab nation, Russia proves that suggestions of its political isolation are irrelevant. According to Seth Ferris, “For reasons Egypt did not create, Russia has become the most acceptable supplier in both political and emotional terms.”

Considering the dynamic evolution of its relations with non-Arab players such as Turkey, Israel and Iran, its ties to Egypt give Russia more clout as a Middle East player. Even though Moscow is both unable and unwilling to compete here with players wielding greater influence, primarily with Washington, it has not merely secured its niche but is clearly gaining ground.