US Secretary of State John Kerry's visit to Cairo has indicated a need to cooperate against the regional terror threat, despite US concerns over human rights in Egypt. 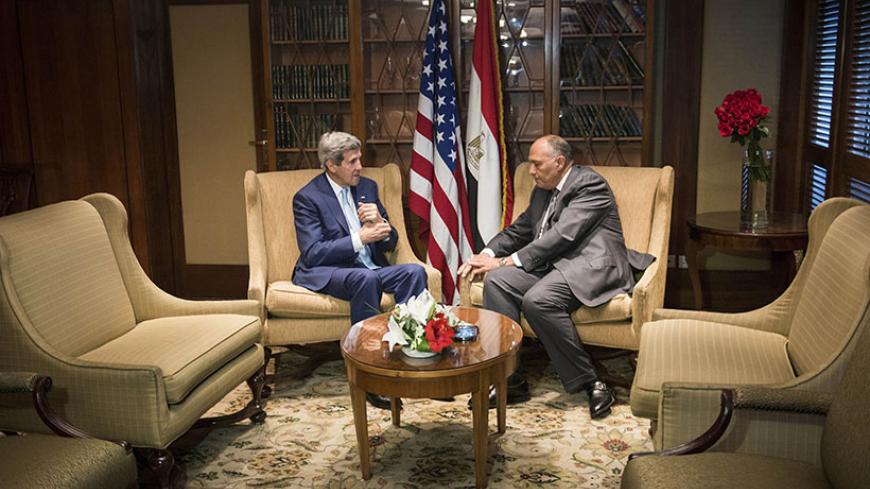 In a surprise visit, US Secretary of State John Kerry arrived in Egypt on June 22 and held several meetings with the newly elected president, new minister of foreign affairs and head of the Arab League. It was the first visit by a high-ranking US official since President Abdel Fattah al-Sisi’s inauguration. The visit was a part of a regional tour possibly designed to reach common ground on how to deal with the deteriorating situation in Iraq with the rapid advance of the Islamic State in Iraq and al-Sham (ISIS).

Intensive lobbying has managed to persuade Congress to maintain its aid package to Egypt at its current levels and release $575 million, the first tranche of the $1.3 billion annual assistance to Egypt. Kerry also announced that 10 Apache helicopters on hold will be delivered “very soon” to Egypt. The visit, release of the funds and announcement regarding the helicopters are signs that the United States is eager to resume strategic cooperation with Egypt in light of the growing terror threat from radical Islamic groups such as ISIS, Ansar Bayt al-Maqdis and al-Qaeda.

Analysis of the sophisticated bureaucracy of ISIS and its strategic intent to remove the borders of regional states reveals a qualitative paradigm shift in the nature of this group as well as its true aims and potential threat. Rather than being a mere terrorist franchise relying on insurgency to weaken existing governments, ISIS seems to be seriously pursuing its own state with an alternative style of government, with a revisionist view of how the region and world should look.

Despite the flaws of Egypt’s “very difficult” transition and criticism of the military’s increasing involvement in the country’s political and economic affairs, the United States may have reached the same conclusion as most Egyptians. Middle Eastern states are facing an unconventional war of unprecedented proportions. With weakened state institutions, accumulated demographic pressures and dysfunctional or oil-reliant economies, ISIS and its allies could cut through countries in a blitzkrieg, devouring the colonial borders of the Middle East and installing God-knows-what instead.

The threat of radical Islamist militants may have been underestimated, and the best way to confront it is to help an ally like Egypt build its institutional capacity, rather than weaken it or stand by watching it get weakened. Armageddon is taking the express train home. Egypt and its military, which has remained intact and united, is one of the few forces in the region able to stand up to this threat. Despite a chain of bloody yet limited skirmishes with overzealous anarchists, the military has miraculously managed to avert a situation where it would have been drawn into a full-scale confrontation with an agitated population, steering a difficult course in turbulently swinging public moods.

Internally, Kerry’s visit and the resumption of US aid has boosted the confidence of statists and ultranationalists who continue to strongly support Sisi and demand even harsher measures against what they regard as “terrorists” and “subversive” activists. They see these measures as necessary to protect the Egyptian state, which was facing an existential threat.

Restoring US-Egypt strategic cooperation to jointly stand up to terrorist threats from the likes of ISIS and Ansar Bayt al-Maqdis has also weakened the local conspiracy theory that the United States was secretly supporting Islamist extremists in an effort to keep Middle Eastern countries weak and in a continuous state of internal conflict, turmoil and chaos. This theory was widely used to explain why Washington was supportive of the Muslim Brotherhood and the reason it "punished" Egyptians for deposing President Mohammed Morsi.

Most importantly, the visit may put an end to the Muslim Brotherhood’s hopes — indeed, illusions — that pressure from the United States and the European Union behind it will eventually help restore Morsi as president. The visit may help what remains of the 86-year-old organization sober up and come to terms with the new reality and hopefully evolve ideologically and modify its confrontational strategy.

As the country moves away, albeit slowly, from the abyss, the Egyptian government must end this wave of panic, which is presumably behind several extraordinary measures that may be doing more harm than good, both internally and to Egypt’s international image. Two days after Kerry’s visit, a Cairo court handed harsh prison sentences to Al Jazeera journalists on trial, causing a wave of uproar in circles in Egypt and around the world.

Kerry described the verdicts as "chilling" and "draconian." Disturbing mass death sentences, despite being reduced in subsequent judicial appeals, also increase the likelihood of more, rather than less, violence in the future. They make it more difficult to reach reconciliation and wider political inclusion. If economic revival, the return of international investors and tourism are important to Egypt’s economic recovery, these harsh verdicts are surely counterproductive.

The Egyptian government must balance its legitimate concerns regarding security and stability with a commitment to uphold human rights, freedom of speech, freedom of press, freedom of association and the nurturing of a healthy and inclusive political space for all Egyptians.

The resumption of US-Egypt strategic cooperation is important to standing up to growing regional security threats and a positive sign to encourage Egypt’s progress along its democratic transition. In its effort to dismantle the underground economic and social networks of the Muslim Brotherhood and its allies, the Egyptian government, however, should be careful not to alienate wider sectors of society than what is already against it. The government must also be more mindful of the above flaws and the damaging effect they leave on Egypt’s brand. World media and public opinion can tie the hands of the United States and other Western allies even if their governments want to extend help to Egypt for strategic purposes.