Rouhani calls for media to focus on corruption

Despite calling on the press to help fight corruption, the Iranian government still needs a major initiative to eliminate the mismanagement that characterized the Ahmadinejad era. 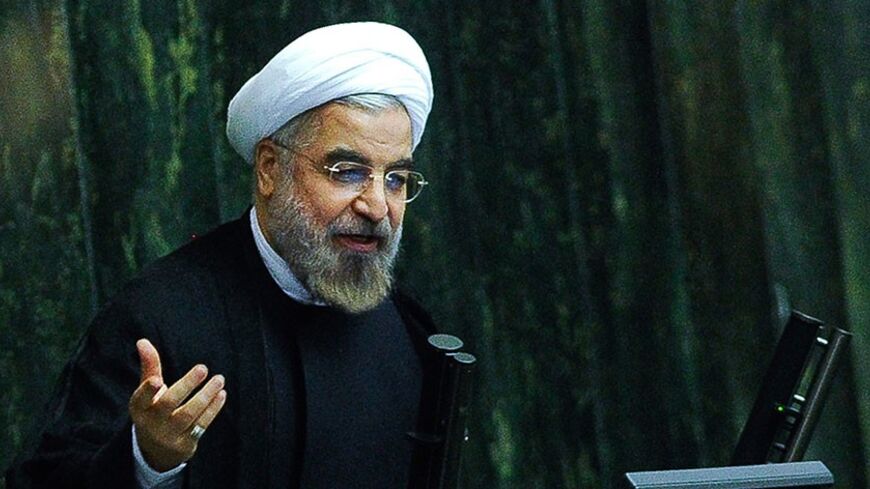 Iranian President Hassan Rouhani speaking during an open session in the parliament in Tehran, Nov. 10, 2013. -

There is no doubt that corruption and mismanagement have been significant impediments to Iran’s economic development. Experts agree that during former President Mahmoud Ahmadinejad's two terms in office, these two issues were the main causes of economic decline and increased misery in the country. Though that administration came to power claiming that it would fight corruption and disclose the names of corrupt officials and businessmen, throughout its years, not only there was no disclosure from the government’s side, but the one lower-level official who spoke publicly about corruption inside the regime, Abbas Palizdar, was imprisoned.

There were numerous meetings between the heads of the three branches of government to coordinate efforts to fight corruption. Nonetheless, corrupt practices rose, partly in the name of circumventing sanctions. In the words of one Iranian expert, what used to be under-the-table corruption before Ahmadinejad became overt.

With the change in administration, Iran is now witnessing a new push to fight corruption. A few weeks ago, President Hassan Rouhani addressed the issue by instructing government offices to identify the business circles that enriched themselves in the name of circumventing sanctions. Almost concurrently, high-profile Iranian billionaire Babak Zanjani was arrested and accused of corruption and embezzlement. That case is creating waves and pointing fingers toward other corrupt officials, and it remains to be seen whether the government will arrest and prosecute any former or current officials in that specific case.

Now it seems that Rouhani wants to go one step further. On March 8, during his speech at the closing ceremony of the Press Festival, the president called upon the Iranian media to become his “instrument of soft power” in the fight against corruption. He asked the Iranian press to “increase the cost of corruption to a level” at which no one would be tempted. He also suggested that the names of corrupt persons and officials not be kept secret by government officials, but disclosed via the media.

Hesameddin Ashena, a top advisor to Rouhani, clarified the president's statement by saying, “The statement was getting at that those journalists who disclose corrupt cases would act as an arm of the government and also an arm of the judiciary, and would be the public opinion auditors.”

However, the country’s complex power structure and that the president does not control judicial and security forces make such a campaign almost impossible. In fact, Ashena clarified, “The government cannot support the media in a legal or judicial manner, but we will provide intellectual support.” He explained that the judicial support would emanate from the “State Audit Organization,” which is responsible for such matters. It is clear from these remarks that none of the state organizations is comfortable in taking on the role of fighting corruption, knowing that it is a deeply ingrained phenomenon in a large number of state institutions.

Influential Majles deputy Ahmad Tavakkoli said that the Islamic Republic has reached a state of systemic corruption. He opined to Fars News, “Systemic corruption is the stage where the entities that are in charge of fighting corruption are also corrupt to a certain degree.” Could this be an explanation for the president's plea to the Iranian media?

Former Vice President for Parliamentary Affairs Mohammad Ali Abtahi believes that the potential disclosure of names in the press will have a deterrent impact on corruption. However, he thinks that as a prerequisite for a more proactive role of the press in naming and shaming corrupt officials and businesspersons, a law must guarantee the safety of journalists after they make their report.

There is no doubt that despite the above statements of support, Iranian journalists are not in a position to disclose the names of corrupt officials or managers. In fact, in the past few years, those who did dare publish such names ended up with publication bans and other penalties. For example, in 2012, the news site Entekhab was banned for months and its editor imprisoned for publishing news about corruption in the government. Therefore, the common practice in the Iranian media is to identify individuals with only their initials, and sometimes just a vague description of their positions.

The only way that such a campaign will be successful is for the government to take matters into its own hands. Passing the task to other institutions such as the media, especially institutions that are more vulnerable to pressure from shadowy networks of shared interests, will not achieve any results. Eventually, Iran needs a law protecting freedom of information and a clear endorsement of investigative journalism. The idea of such a law may be far fetched in a complex power structure and even if one is passed, there is no guarantee that it will be observed.

In the meantime, the government should take on the role of disseminating information about corrupt business practices and shady officials. In fact, if the president’s office would include a page on the disclosure of corrupt dealings on its website, that site would become a valuable source of information for the media. Such an initiative would also increase the government’s legitimacy, as society at large would feel that there has been real change in the government’s approach to corruption. However, all officials know that any disclosure of corrupt networks will immediately lead to counterattacks and claims of corruption and nepotism. Evidently, this expectation has so far hindered a serious anti-corruption campaign.

Therefore, it may be a good idea for the Rouhani government to draw a line and state that all new corruption cases will be treated harshly, to prevent being dragged into thousands of past corruption cases. Alternatively, Rouhani would have to find a trusted and honest government official to be in charge of disclosing information without fear of counterclaims and attacks. Whatever the solution, Iran desperately needs a functioning anti-corruption campaign that would also be in line with one of the objectives that Supreme Leader Ayatollah Ali Khamenei named in his recent decree on the “resistance economy”: “Encouraging a transparent and healthy economy” and “preventing an environment that allows for corrupt actions in monetary, commercial and currency matters.”