Iraq outlines the measures it is trying to take against corruption as criticism mounts against the government from within and without. 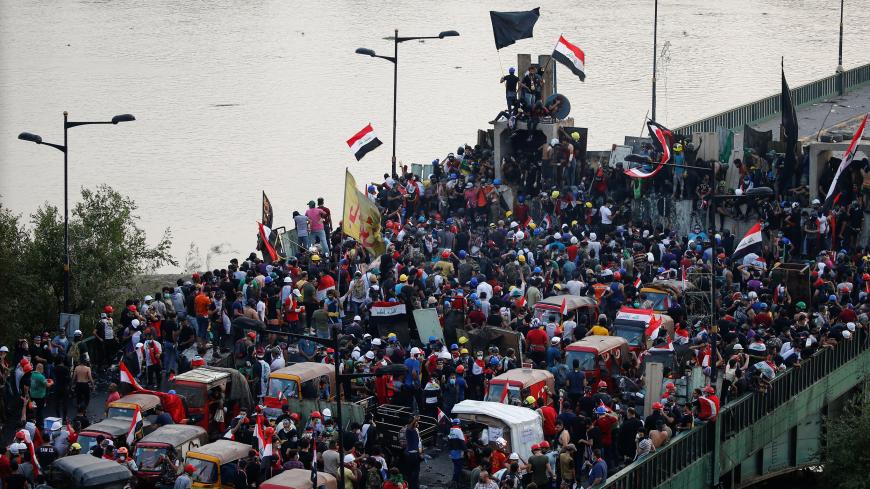 Iraqi demonstrators are seen at Al Jumhuriya bridge during a protest over corruption, lack of jobs, and poor services, Baghdad, Oct. 29, 2019. - REUTERS/Thaier Al-Sudani

BAGHDAD — UN representative in Iraq Jeanine Hennis-Plasschaert is calling for action against what she called "pervasive corruption" in the government, as the death toll from ongoing, massive protests has exceeded 400 since early October.

"We have heard plenty of words and gestures, but have seen fewer concrete outcomes," she said. "The political class will need to lead by example, for instance by publicly disclosing their assets," she said in a Dec. 3 report to the UN Security Council. "I cannot overstate that anti-corruption efforts in Iraq will be key to unlocking immense social, economic and political potential. Without meaningful progress here, we risk treading water on nearly every other front."

She also met Dec. 8 with Iraqi President Barham Salih to discuss the need to protect peaceful protesters and stem the violence against them. This came one day after she condemned the Dec. 6 attack that killed dozens of protesters and wounded more than 100. She described the violence as an "atrocity."

Some government agencies and independent bodies in Iraq are trying to take measured and urgent action to defuse the anger of Iraqis in the street calling for reform and political change. So far, the efforts have been to no avail.

The independent Commission of Integrity has issued several statements over the past few weeks calling for the arrest of officials, ministers, parliament members, governors, general directors, provincial council members and committee heads, in coordination with the Supreme Judicial Council. The council recently announced that parliament members can be held be accountable on corruption charges without the need for judicial approval.

Even the former head of the Commission of Integrity is being sought on a corruption arrest warrant from Baghdad’s Karkh Investigation Court.

The anti-corruption campaign seems to be facing two main problems. First, the campaign can't reach the chieftains, known as the “whales of corruption” in the central and southern provinces, given the great influence and power they wield over some judicial and regulatory bodies.

Second, it's difficult to track down looted funds and accused people who are abroad, despite a recent commission directive to recover money smuggled out of Iraq by corrupt entities, estimated at $15.6 billion. Iraq doesn't enjoy bilateral cooperation with countries hosting most of the convicts and fugitives.

Commission member Jamal Kojar told Al-Monitor that the anti-corruption measures launched by the commission “in cooperation with the Supreme Judicial Council are good measures, but they came a little too late and will not affect the senior officials.”

He added, “The fight against corruption must start from the top down and not just prosecute junior employees,” stressing there is “collaboration” between some influential people, whom he refused to name, and some courts settling major corruption cases. “There are previous and current [parliament members] and ministers who managed to get out of the corruption charges against them, given their contacts and influence."

Former Salahuddin Gov. Ahmad al-Jubouri was among those indicted Nov. 21 by the commission for alleged financial corruption. He was arrested and released within a few days following contacts between parliament Speaker Mohammed Halbusi and the Supreme Judicial Council.

Also, Sadiq Madlul al-Sultani, former Babil governor and a current parliamentarian, managed to get out of jail on bail around the same time as Jubouri.

In a statement, the commission said that during his tenure of governor, Sultani "committed irregularities and imported large quantities of cement without any customs fees.”

It added that Jubouri, while he was governor of Salahuddin, "committed irregularities in the contracts for building the internal department of the University of Tikrit."

Many other prominent names in politics were summoned for investigation by the time Jubouri was released, including Minister of Culture Abdul Amir al-Hamdani, former Minister of Transport Kazem Fenjan and former Minister of Science Abdul Karim al-Samarrai. Also, the judiciary sentenced former Baghdad Mayor Naim Abboub to three years in prison.

“There are major corruption cases that are currently being investigated that would affect prominent officials in the previous government and the current parliament, if the commission’s work was not hindered,” a source supervising some anti-corruption cases told Al-Monitor.

"The judiciary will continue to issue arrest warrants against the accused as long as the popular protests are ongoing. There is fear of a constitutional vacuum that could hinder the summoning of some of the accused, especially those abroad.”

Alia Nassif, a parliamentarian for the State of Law party and a commission member, told Al-Monitor, “Corruption in Iraq is a large system involving external parties, and parliament is trying to fight this scourge by adopting laws — including the law of 'Where did you get this?’ which was passed recently, and interrogating senior officials."

She pointed out, “There are more than 12 interrogation cases against ministers and other same-level officials. We hope the parliament speaker will include these cases on the agenda in the coming weeks.”

It is noteworthy that all these indictments and decisions to summon officials did not resonate at the sit-ins and demonstrations and have yet to defuse the tension and anger in the streets. It appears protesters believe these measures are mere short-term palliatives and that won't help eradicate the rampant corruption as long the current political class controls the state and oversees the security agencies.