Iraq's parliament has passed a resolution to close all inspectors general offices, a move some fear may open the door to widespread corruption in the country. 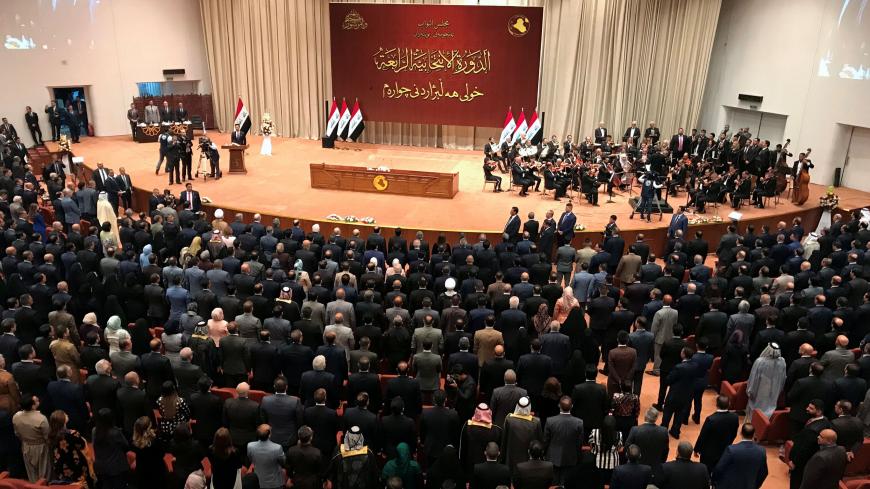 BAGHDAD — The vote on a “nonbinding” draft law designed to phase out the offices of inspectors general took place March 9 in Iraq's parliament. The major differences between political blocs over the draft law resulted in adjournment of the discussion until the March 14 session. Following a second discussion and vote in parliament, this draft will turn into binding law.

In parallel to the draft law to phase out inspectors general offices, Prime Minister Adel Abdul Mahdi announced Jan. 29 a plan to fight rampant corruption, which includes the restructuring of the Supreme Anti-Corruption Council and 40 files on alleged corruption to be treated as a priority in the fight against financial and administrative corruption.

The Supreme Anti-Corruption Council consists of two members of the Supreme Judicial Council of Iraq, the head of the Federal Board of Supreme Audit, the head of the Commission of Integrity, and a representative from both the inspectors general offices and the prime minister's office.

Speaking to Al-Monitor, member of the parliamentary Integrity Committee Laith al-Dulaimi indicated that “the decision to phase out the inspectors’ offices consists of a deliberate move initially designed to address the state institutions’ weak oversight and overlapping powers between the Federal Board of Supreme Audit, the Commission of Integrity and the competent judicial authorities.” He added that phasing out the offices of inspectors general requires dividing their powers between the Federal Board of Supreme Audit and the Commission of Integrity, as well as bridging the gaps in the fight against corruption.”

Dulaimi, also a member of the National Axis Coalition, explained that parliament is in favor of any proposal designed to address corruption and has the intention of hosting Abdul Mahdi to have him underline the details of the anti-corruption council. The latter [the council] is not based on any constitutional text and is an integration of the three [legislative, executive and judicial] authorities, which contradicts the principle of the separation of powers.”

Moreover, Muqtada al-Sadr's Sairoon Alliance supports the draft law to phase out the inspectors general offices and activate the judiciary role, Sairoon Alliance parliament member Amjad al-Ukabi told New Sabah. He justified that “the multitude of oversight bodies that are in charge of following up on the disbursement of public funds has had a negative impact and resulted in broader corruption in the state.”

There is a political bloc that strongly opposes phasing out these offices and considers them to be the main oversight body, according to Fatah Alliance member Rahim al-Daraji. He told Al-Monitor that “phasing out the offices of inspectors general will open the door wide to corruption in Iraq, given that these offices consist of a key source in the fight against corruption and the main drive of the judiciary and Commission of Integrity whose reports bank on the information the inspectors general provide.”

Daraji, also a former member of the parliamentary finance committee, said “there are many obstacles to the inspector general’s job — most notably is being affiliated with the minister, which obstructs the referral of those accused of corruption to the judiciary. Also, political blocs require the inspector general to turn a blind eye to many corrupt deals. Thus, there is a need to reform these institutions instead of phasing them out — particularly since the government has not provided an alternative. He indicated that “the Supreme Anti-Corruption Council that Abdul Mahdi announced is unconstitutional and a mere title that only seeks to seize the powers of the inspectors general offices. It lacks the plans and tools.”

Former Prime Minister Haider al-Abadi’s Nasr Coalition is also against the draft law. Taha al-Difaei, a member of parliament for the coalition, explained that “phasing out the offices of inspectors general would practically imply ending the job of the Commission of Integrity, which gets all of its information from said offices. Therefore, those who seek to phase out these offices are obstructing the fight against corruption.”

Difaei told Al-Monitor that “reactivating the [prosecutors] should not affect said offices. The [prosecutors] are linked to the judiciary, while the [inspectors general] offices are correlated with the ministries and Commission of Integrity. Also, the plaintiff cannot assume the tasks of the inspection.” He indicated that “the majority of parliamentary questioning in the past years was coordinated with the inspectors general offices.”

Inspectors general offices are new to Iraq’s administrative system. Established by US administrator Paul Bremer in 2004, these offices are administratively linked to the ministries and the prime minister's office. The inspectors submit their reports to the relevant minister and are not associated with any other independent commission, be it an oversight or judicial commission. Based on that, the inspector general is placed under the authority of the party or political bloc that selects the minister.

The inspectors general offices are not mentioned in the 2005 Iraqi Constitution. They continue to operate upon Coalition Provisional Authority Order No. 57 and have yet to unveil a major corruption case. In fact, Iraq was ranked the world's 13th most corrupt country and was 6th among Arab countries, according to Transparency International. Based on that, the experiment of inspectors general offices at least requires a reappraisal. Yet phasing them out to the advantage of a nonconstitutional council — namely the Supreme Anti-Corruption Council — is far from being the best solution to corruption in Iraq.

The idea of phasing out inspectors general offices cannot be perceived as a step in the right direction unless other moves designed to resolve the problems facing the judiciary are taken in parallel. This is not to mention the establishment of a new oversight system to be fully correlated with the judicial authority.