The new Iraqi prime minister says there will be no tolerance for human rights abuses in battling corruption. 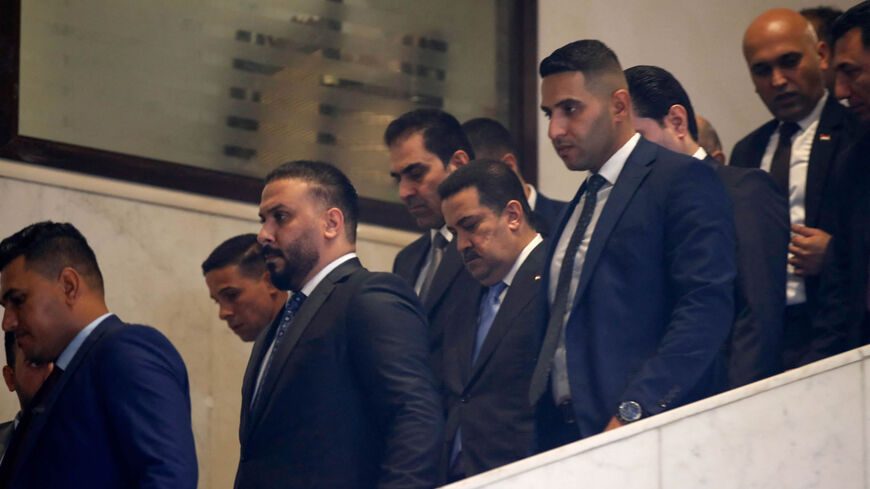 BAGHDAD — Iraq's new government is facing challenges in its campaign against corruption, which Prime Minister Mohammed Shia al-Sudani has made a priority.

On Nov. 16, Sudani announced the formation of a Supreme Anti-Corruption Commission along with a security team led by head of the Falcons intelligence cell Abdul Karim Abed Fadel, aka Abu Ali al-Basri, who holds the position of director general in the Ministry of Interior.

The formation of a commission headed by a security figure sparked concerns among activists that this body may be used for political purposes, with some speculating that those accused could even be subjected to torture.

On Nov. 20, Sudani ordered a special investigation on alleged human rights abuses regarding the prison at Al-Muthana Airport in Baghdad and other prisons. He also instructed the human rights adviser to Sudani to visit the prison at the Baghdad airport, to conduct interviews with the inmates and submit the results as soon as possible.

Anas al-Azzawi, adviser to the Iraqi Observatory for Human Rights, told Al-Monitor, “There are deep concerns over the anti-corruption process witnessing torture. There are previous instances in Iraq where confessions were extracted through intimidation and torture.”

A senior source in Sudani’s office told Al-Monitor on condition of anonymity, “There will be no torture or abuse of power with those accused of corruption.”

Basri’s assistant concurred, as he told Al-Monitor on condition of anonymity, “The commission’s role will be merely executive and investigative, meaning that it will arrest those accused of corruption based on arrest warrants and then investigate their case in the presence of a judge from the Supreme Judicial Council.”

Before the formation of the committee, Sudani had announced Nov. 11 that he had received complaints from people who had been previously subjected to torture during investigations.

Some critics see political motivations in the effort, targeting previous political figures, while probably giving a pass to those in power.

Ali al-Bayati, member of the board of commissioners of the outgoing Commission for Human Rights, told Al-Monitor, “Logically speaking, one cannot expect corruption to be fought by those who caused it. But we hope that they reconsider their actions before all the gains they have achieved are lost and that they start a real fight against corruption.”

He added, “We hope that the new government will manage to fight corruption, but in the absence of real mechanisms that do not follow people or individuals and prefer political moods over legal ones, we will be faced with many cases marred by human rights violations.”

Anti-corruption efforts in Iraq are facing great challenges, in particular the lack of political support, as politicians deter any efforts to hold accountable those accused of corruption and human rights violations. Therefore, the formation of committees and bodies in each government remains a nonefficient formality.

A former member of the Anti-Corruption Council that was formed under the government of Adel Abdul Mahdi told Al-Monitor on condition of anonymity, “The formation of committees and commissions is helpful, but corruption in Iraq remains both political and politically protected amid a quota-based governance system. Political parties are the ones appointed to public leadership positions without such appointment being based on competence, experience or integrity.”

He noted, “There is a major challenge facing Sudani's government in the fight against corruption, and its steps cannot succeed without a single general policy and strict law enforcement. I think it is safe to describe what is happening as mere attempts that we hope will mark the beginning of boosted integrity in the face of corruption.”