The number of forcibly disappeared persons in Iraq remains significant, amid no serious measures from the Iraqi government to address the issue. 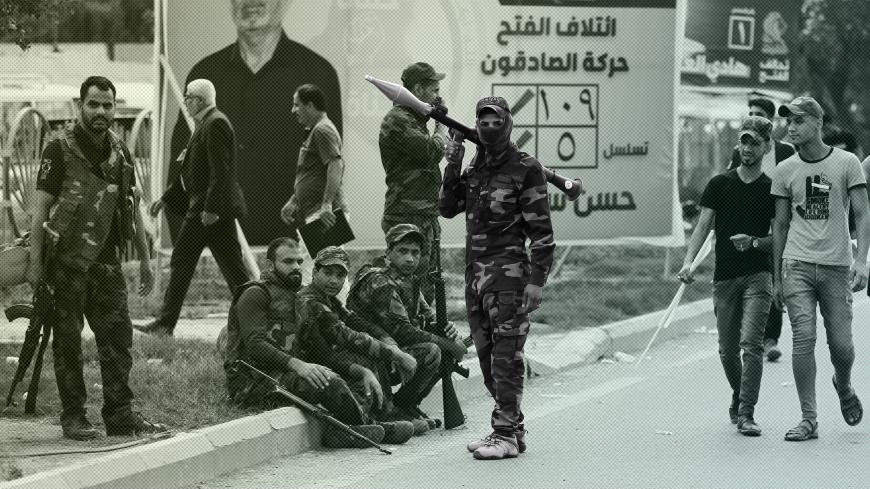 Iraqi fighters of the Popular Mobilization Units stand guard during a campaign gathering for the Fatah Alliance, a coalition of Iranian-supported militia groups, Baghdad, Iraq, May 7, 2018. - AHMAD AL-RUBAYE/AFP/Getty Images

Anas al-Azzawi, member of the Office of the Iraqi High Commissioner for Human Rights (IHCHR), reported July 24 that “7,663 people have been forcibly disappeared during the last three years. IHCHR confirmed that 652 disappeared persons were in detention and prisons, and the search is still ongoing to find the others.”

This number of enforced disappearances, which include neither those forcibly disappeared during the Islamic State (IS) phase nor those in the Kurdistan Regional Government (KRG), is proof of the ongoing violence and political and sectarian conflict that began after 2014, following IS’ control over a third of Iraq. These forced disappearances have surpassed those that took place in Iraq during the sectarian civil war from 2005 to 2008.

Wahida al-Jamili, rapporteur for the parliamentary Human Rights Committee, told Al-Monitor, “Some were forcibly disappeared at the hands of political parties and others by armed parties, both of which find in such aggressive behavior a way to get those who oppose them out of the picture.”

However, she noted, "Those who forcibly disappeared for sectarian reasons are few compared to when IS was in control or during the civil war. All sectarian components have become more aware that it is pointless to eliminate one another this way. In addition, there have been political agreements and the political process based on the balance between components has been a success.”

IHCHR representative in the National Commission for Missing Persons Ali al-Bayati told Al-Monitor, “Since the last months of 2017 and until August 2019, IHCHR has received over 7,000 reports or complaints about missing persons, most of whom went missing after June 2014, according to their families.”

Speaking about the procedures to deal with these reports, he said, “According to Law 53 of 2008, IHCHR has the authority to receive these complaints, investigate them and address the concerned authorities in order to know the fate of missing persons or to hold those responsible accountable.”

Bayati said, “We are now in the process of investigating these complaints in order to submit them to the Supreme National Committee formed by the Supreme Judicial Council, the General Secretariat of the Council of Ministers, all the security institutions and the KRG. IHCHR is represented as an observer, according to Diwani Order 46. It is the one in charge of looking into missing persons files, malicious claims and disputes in areas that were once controlled by IS and are now liberated.”

He noted, “Iraq is a member of the International Convention for the Protection of All Persons from Enforced Disappearance, but there is no law to enforce this convention and hold those responsible accountable.”

This official failure to address the issue of enforced disappearance, which Bayati pointed out, was underlined by the Iraqi Observatory for Human Rights in late 2018. He added, “There is excessive neglect in how the Iraqi government deals with the issue of those who went missing during the military operations in October 2016 in Mosul as well as when security forces entered the city, as a number of these missing persons are in government detention centers, some in Baghdad.”

Legal expert and former judge Ali al-Tamimi told Al-Monitor, “The parties behind enforced disappearance are ignoring the constitution and the Criminal Assets Law, which prohibit the arrest or detention of persons without a judicial order. The fate of the arrested person must be decided by the court of inquiry within 24 hours and the prisons must be subject to the control of the prosecution, the parliament and IHCHR.”

He said, “The constitution requires the prime minister to open an immediate investigation in cases of enforced disappearance that international organizations raise, and work to hold those involved accountable. Every detention of a person without a judicial order is terrorism.”

Tamimi added, “The families of the victims have the right to ask the Iraqi government for moral compensation for the damage inflicted on them by suing the kidnappers.”

It seems there are attempts to reduce the contradiction between the situation on the ground of the ongoing enforced disappearance and the constitution that rejects them.

In this context, Jamili referred to a proposal in parliament "to enact a law to protect all persons from enforced disappearance under the constitution in its articles on rights and freedoms. This would also be a commitment to the obligations Iraq took upon itself when signing the Convention for the Protection of All Persons from Enforced Disappearance.”

However, Jamili admits that “enacting the law will take time and it will not be implemented any time soon.”

Iraqis have endured decades of executions, enforced disappearance and human rights abuses since Saddam Hussein’s regime, which continues despite the existence of security and justice authorities that ought to hold those responsible accountable. As a result, citizens either choose to leave the country or stay and face an unknown fate. Thus, Iraq urgently needs to renounce its ancient violent methods, including enforced disappearance.