Though Israel possesses the best military means in the region, when attacked by rockets, its hands are tied, unable to retaliate forcefully, and the Israeli population is growing more and more skeptical about the worth of an agreement. 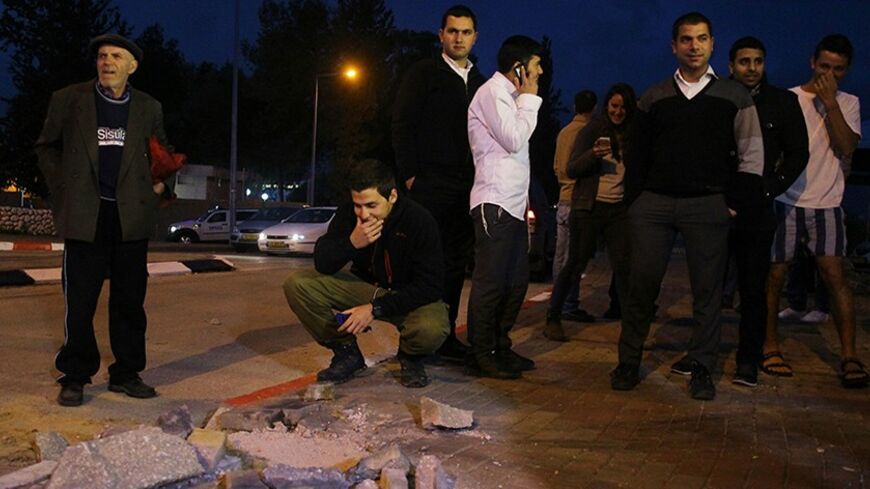 Israeli onlookers survey the damage caused by a rocket which was fired from the Gaza Strip and landed in the southern Israeli town of Sderot, March 12, 2014.

When late Prime Minister Ariel Sharon came up with the disengagement plan, which subsequently saw Israel pull out of the Gaza Strip in 2005, having razed the flourishing Israeli communities to the ground and redeployed along the international border, he was asked what would happen if the Palestinians continued firing rockets at civilians even after the eviction. “In that case,” Sharon replied, “I would demand that every rocket be met by heavy artillery fire.”

Sharon’s logic was simple. Once the territorial conflict was over and so was the occupation, firing rockets at civilian towns would be crossing a red line. Every rocket fired should be met with disproportionate force so as to make it clear that Israel would not tolerate a situation whereby one million citizens are being held hostage by a few terrorist organizations.

Sharon’s directive never got off the ground. Following that directive, then-Attorney General Meni Mazuz sent a detailed opinion, explaining that the kind of retaliation instructed by the prime minister was prohibited. An argument ensued. Outraged, Sharon pounded on the table, yelled and protested, yet he could not alter the decree. By definition, terrorist organizations are terrorist organizations. A sovereign democratic state, however, is bound by an entirely different set of laws. Sharon carried out the disengagement. The Jewish settlements were demolished and burnt (four additional settlements were evicted in north Samaria). Some 8,600 settlers became homeless, and Israel deployed along the international border of the Gaza Strip.

Since then, the rockets have turned from a nuisance into a strategic problem. Hamas seized the Gaza Strip by force, booting out the Palestinian Authority and Mohammed Dahlan’s security bodies, and turning it into a hub of terrorism replete with rockets and missiles — a hub which currently poses a threat not only to Israel’s southern region but also to the center Dan metropolitan area, as far north as the coastal city of Herzliyah. Since Israel’s pullout from the Gaza Strip, its southern citizens have been living under a constant threat of the “red color” siren alert. Forced to stay close to safe rooms or shelters, they find it hard to lead a normal life.

The violence between the two sides can be divided into three categories. The first one is the routine trickle, in the setting of which several rockets are occasionally fired at Israel. When that happens, the Israeli air force instinctively reacts by striking several objectives in the Gaza Strip. A few hours later, quiet is restored.

The second one, consisting of a more massive barrage of several dozen rockets, is known as the “round.” In its wake, Israel reacts more forcefully, using its jetfighters and maybe also tanks. The Palestinians then immediately react with another salvo of rockets, aiming this time at larger towns such as Ashkelon, Beersheba and Ashdod (the latter being located some 40 kilometers south of Tel Aviv.) At this point, several go-betweens (usually from Egypt) step into the picture and a cease-fire is brokered. That is, until the next round.

The third category of violence is the large conflagration, two of which have taken place since the disengagement. Operation Cast Lead was launched by then-Prime Minister Ehud Olmert in 2008 and Operation Pillar of Defense in 2012 by incumbent Prime Minister Benjamin Netanyahu. These are the events that shape the balance of power as well as the deterrence equation between the two sides. They set the rules of the game, only to be updated and upgraded in the next big conflagration.

Ostensibly, this is not a match between equal rivals. Enjoying a decisive advantage over all the Gaza-based terrorist organizations combined, Israel's air force is the strongest one in the Middle East, possibly even the strongest in the world. Having a regular and trained military consisting of armored forces and infantry men, it also has an array of unmanned aerial vehicles (UAV) that can carry out targeted killings with rare power and precision. Israel uses satellites and some of the world’s finest intelligence services, not to mention sophisticated cyber and telecommunication capabilities, special forces and the like.

In reality, however, Israel is the weaker side. Facing limitations and being subjected to rigorous international scrutiny, it has to keep most of its power at bay. Seeing the terrorist organizations in Gaza firing rockets from within densely populated areas and setting up rocket caches in residential buildings, it knows they are hiding behind women and children and cowering below ground whenever the going gets tough. And yet, its hands are tied.

The above accurately describes what is known in professional jargon as an “asymmetrical conflict,” which has its own rules. The fact remains that whenever such a conflict ends, the Palestinians proudly declare a historic victory, putting their launchers away. For its part, Israel makes do with restoring quiet and a few empty statements by Prime Minister Netanyahu, who, prior to rising to power, pledged to topple the Hamas regime and clean up Gaza from rockets. Yet in the past five years he has been satisfied with pinpoint reactions, containing the events with remarkable restraint.

So, what happened this week? This week we witnessed another “round.” It started with an activity of the Israel Defense Forces (IDF) in what is known as the “perimeter.” This is a 100-meter-wide strip west of the fence separating Israel from the Palestinians. Although this area should be under Palestinian control, the understandings reached in the aftermath of Operation Pillar of Defense allow the IDF nevertheless to operate there and uproot bushes and trees so as to prevent terrorist organizations from planting powerful improvised explosive devices. During this activity of the Israeli army, which is essentially a technical one, an Islamic Jihad detail consisting of three militants approached the buffer area, deployed mortars and was poised to fire the shells at the soldiers. An air force UAV filmed this entire chain of events. The photos were later disseminated by the IDF spokesman. Reacting swiftly to this activity, the Israeli air force dispatched a UAV, which hit and killed the three Islamic Jihad militants.

The following day, Islamic Jihad fired approximately a hundred rockets at Israeli communities located closest to the Gaza border. This is a huge number of rockets and a declaration of war for all intents and purposes.

The air force retaliated by carrying out a few dozen air strikes. With Islamic Jihad continuing the fire, the air force operated again, striking a few dozen more targets. At this stage, Islamic Jihad, having exhausted the round, steps down. Filling its shoes are the Popular Resistance Committees. They continue to fire rockets, keeping the round of violence on a “back burner.” In Gaza there are always those that would be happy to join someone else’s “party.” They don’t stand much to risk since Israel is squarely focused on Islamic Jihad. Thus, they have no real motivation to miss out on the opportunity to fire a few rockets at civilians on the other side.

Given this state of affairs, Israel fired the ultimate threat at Islamic Jihad: Unless you put a stop to this, Israel will resume its targeted killings. That worked. As this article is being penned (March 14), it seems that Islamic Jihad has cooled off. Nothing strikes more fear in the terrorist leadership in the Gaza Strip than targeted killings. A world pioneer in this area, Israel has unmatched capabilities that combine top-notch intelligence, consisting of human, signal and visual intelligence. It also has a swift and agile execution capability that combines all IDF branches with perfect timing.

Despite their bravado and virtual heroism, the leaders of Islamic Jihad and Hamas have a penchant for life. They don’t really want to ascend by storm to the heavens while riding a motorbike or car through the streets of Gaza.

The threat worked. Now we’re entering the stage of phasing out of this round. The trickle will continue for a day or two and be met by a token air force response, until the whole thing peters out. In two weeks or in two months, the next round will take place. This is what has been going on for over a decade.

I think it would be hard to find any other sovereign state in the world that would have come to terms with decade-long salvos of rockets being fired at its citizens who had done nothing wrong. Being in a much more complicated situation than most countries of the world and having to deal with five fronts simultaneously, Israel continues to live the Gaza nightmare because at this stage it poses no real existential threat.

The tragedy lies in a different aspect of the situation. The fact that the pilot experiment in the Gaza Strip failed and that the Palestinians exploited the Israeli pullout in order to turn the area into a depot of rockets and a hub of terrorism, instead of rehabilitating and rebuilding it, is what makes most Israelis skeptical. They are leery of anything that has to do with the peace process and other initiatives in Judea and Samaria fashioned after Gaza.

When Israelis are so skeptical and Palestinian Authority President Mahmoud Abbas is unwilling to even so much as entertain the idea of recognizing Israel as the state of the Jewish people, it is no wonder that US Secretary of State John Kerry finds himself at a dead end.