In his first major public appearance since retiring from the State Department, Robert Ford said both the United States and the Syrian opposition need to change strategies to counter the Assad regime and its external backers. 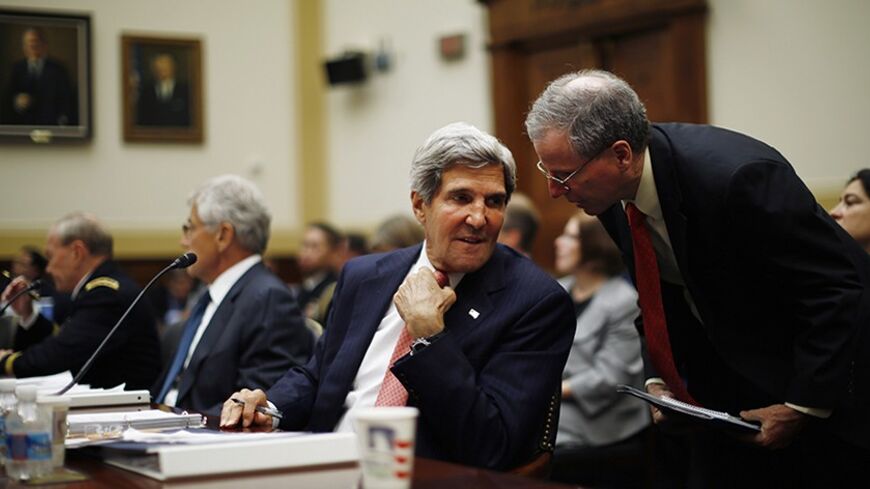 US Secretary of State John Kerry confers with US Ambassador to Syria Robert Ford (R) as Kerry testifies at a US House Foreign Affairs Committee hearing on Syria on in Washington, Sept. 4, 2013. - REUTERS/Jason Reed

Robert Ford, the just-retired former US ambassador to Syria, says that the Syrian war is grinding toward an intractable stalemate in part because the opposition has failed to unify around a single leadership against the regime of President Bashar al-Assad.

Ford, who left Damascus in 2011 and spent the past three years trying to help the opposition become more coherent, told an audience at the Woodrow Wilson International Center for Scholars on March 20 that a “huge amount of personal ambition and competition” among would-be replacements for Assad have hurt their cause “from the beginning.”

In his first major public appearance since retiring from the US State Department, Ford related, “The opposition needs to reassemble around a Syrian agenda first and foremost.” While the Syrian opposition agrees that Assad must go, Ford said, “They always get snagged up … over who should lead the process.”

Ford predicted that the United States would re-evaluate policy toward Syria in light of the failure of the Geneva talks to close the gap between the externally based opposition and the Assad government over a political transition. He assessed that the Barack Obama administration was unlikely to provide anti-aircraft weapons to the opposition because of concerns that they might proliferate and menace civilian aviation.

Speaking further about the re-evaluation, Ford asserted, “It’s easy to imagine they will refocus on how to change the balance on the ground,” especially given recent battlefield victories by the Syrian government, augmented by forces from Lebanon’s Hezbollah and Iraqi Shiite militias who are fighting as far north as Aleppo.

The Syrian opposition, Ford said, would also have to change its tactics from trying to protect civilian populations — a battle it has lost to barrel bombs and the regime's siege tactics — to employing guerrilla methods. “They’re going to have to become less keen on holding ground and focus on things like supply lines,” he contended.

The veteran US diplomat confessed to feeling anger and frustration at the United States' inability to stop the unprecedented carnage in Syria. Nearly 150,000 people have been killed and more than 40% displaced. However, in response to an Al-Monitor question on whether US military action might have made a difference in summer 2012, Ford said the opposition at the time had not been ready to take advantage of events, among them a suicide bomber killing Assad’s brother-in-law, a former military intelligence chief and the defense minister in the heart of Damascus.

He further noted, “I don’t think even if we had done something … even if the regime had toppled, I could just as easily imagine a power vacuum.” Ford explained that the Syrian National Council, the external opposition recognized by the Obama administration at the time, “was less organized than the Libyan council” that drew widespread international support to fight the regime of Moammar Gadhafi, noting that the Syrians lacked any sort of transition plan.

Ford attributed the opposition's disunity (which seems to have only grown worse) in part to Syria’s political culture and the harsh repression of the population for the past 40 years by the current president and his father, Hafez al-Assad. Ford also faulted foreign countries, among them Qatar, Turkey and Saudi Arabia, which have backed different elements among the rebels, including extremist groups linked to al-Qaeda.

Comparing the situation in Syria to Lebanon in the 1980s, when the country was fractured among militias and parties backed by external powers, Ford concluded, “There is no purely Syrian decision now.”

Ford told those in attendance that the regime in Damascus had proven to be more resilient than many had expected, echoing comments by CIA Director John Brennan from earlier in the month. “The regime at its center has a certain unity and coherence lacking in the opposition,” Ford said, even if the Syrian state is “decaying and degrading.”

Assad’s forces remain in control of about a quarter of the country that contains Syria’s major cities from western Aleppo south to Damascus and includes the Mediterranean coast, Ford calculated. The remaining three-quarters is held by “different armed elements” that are fighting each other.

The opposition forces, Ford said, have failed to reassure Syrian minorities, including Alawites and Christians, that their interests will be protected if Assad falls. A “substantial portion” of Alawites are not enthusiastic about the current president, he asserted, and more than 50,000 regime supporters — many of them Alawite — have been killed. Regardless, Ford explained, “They look at the al-Qaeda elements [in the opposition] and say, ‘They’ll kill us all,’ and they’re not wrong about that.”

Asked whether Russia and Iran, the two major external supporters of the Syrian regime, could be persuaded to stop backing Assad, Ford said the Russians “don’t see an alternative to Bashar in terms of controlling the Islamist extremist element.” As for Iran, he related, “We have not had a serious discussion with the Iranians ever about Syria to identify their core interests. I cannot imagine that the Iranians are anxious to see al-Qaeda sink deeper roots into the eastern three-quarters of Syria. But is that enough to build agreement on an outcome? That’s less evident to me.”

Ford predicted that in the short and medium terms, Syria “will become more and more cantonized.” He pointed to the recent declaration of an autonomous zone by a Kurdish group, the Democratic Union Party (PYD), an affiliate of the Kurdistan Workers Party, a group the United States and Turkey have in the past regarded as terrorist.

“The way the PYD did that aggravates tensions and plays in favor of the regime in Damascus,” Ford said. Although the United States as well as Assad’s allies all want Syria to remain a unified state, Ford noted, “There are a lot of centrifugal forces pulling at it.”