What is Sistani's position on the Iraqi elections?

Iraq’s top Shiite religious authority is not endorsing any political party in the upcoming elections and urges voters not to vote for corruption and past failure. 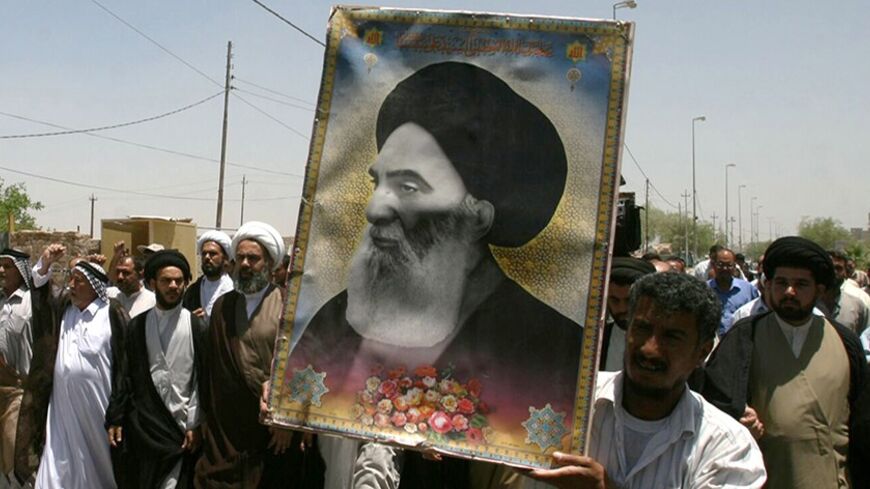 The prominent and key role played by Grand Ayatollah Ali al-Sistani in formulating the general framework of the Iraqi regime after 2003 is no secret. He insisted that Iraqis write the constitution, demanded that the state hire people by democratic mechanisms and insisted on holding elections as soon as possible.

Sistani also played a prominent role in shaping the general political landscape in Iraq in the last 10 years. He contributed to forming the Iraqi National Alliance (INA), which gathered the Shiite voice within a unified political framework but without taking the side of one sect against another. Sistani also helped overcome the obstacles in the internal relations among the INA’s components and also in its relations with other electoral lists. This led other political components to directly or indirectly communicate with him to get help in resolving the problems with their competitors, in particular the INA.

However, since the 2010 elections, Sistani started feeling that Iraqi politicians are generally incompetent and are taking advantage of his religious and social support, rather than positively investing in it to develop the general Iraqi situation.

Sistani has repeatedly said that he aspires an advanced civil state that is in line with the general religious situation in the country, and no more than that. Yet, politicians from religious parties have made no significant efforts toward development, and tended toward forming a hard-line religious state.

Thus, Sistani went from being a supporter of the political system to a critic who aspires to bridge the gaps and fix the damage caused by politicians. He did not support any electoral list in 2010 and stayed neutral toward all lists and electoral blocs, which led to delaying the government formation for eight months.

Sistani supported popular calls to raise the level of services and improve government performance. When he did not get a positive response from the government to those demands, he closed his door to the blocs participating in the government to express his displeasure. His official representatives kept criticizing the government’s performance in their religious and social speeches and statements.

Recently, parliamentary blocs insisted on retaining their privileges contrary to the demands of the people and the religious authority.

That has angered Sistani in a way unseen before. So he issued a fatwa calling on voters to choose wisely to not regret their choice later, and said that they should distinguish the good from the bad, and differentiate between those who work to serve the people and fight corruption and those who work to benefit themselves and who they represent. He also urged everyone to actively and consciously participate in the upcoming elections, scheduled for April 30.

Al-Monitor has learned from sources close to Sistani’s office that the office has ordered Sistani’s agents to maintain equal distance from all parliamentary blocs, while calling on the people to not vote for anyone involved in corruption or anyone who has failed in the previous stage, without mentioning any names. Sistani also indirectly advised the leaders of electoral blocs to nominate new and competent figures to regain the people’s trust.

In a significant development in the relations between the government and Sistani, the cabinet voted on the Jaafari personal status bill, despite Sistani’s opposition to the bill and the insults directed at him by some religious parties’ leaders because of his position.

It seems that the religious parties are trying to withdraw their support of Sistani after they used him to attain power. Also, it seems that there are new political alliances, whereby the Islamic Dawa Party, the main member in the ruling State of Law Coalition, has learned that it would be very difficult to get the support of the major Shiite forces like it did before. So there is a trend toward small blocs and blocs that broke away from larger blocs that adhere to Shiite "chauvinist" ideologies such as the Virtue Party, the party behind the Jaafari personal status law; Ahlul Haq, the radical group that broke away from the Sadrists; and the Badr Organization, which is directly backed by Iran.

It thus appears that Sistani feels that he made ​​a mistake by supporting Islamist parties and is now trying to preserve the independence of the religious establishment by staying clear of "dirty politics," and by correcting the political course in the country without getting involved in supporting a specific group that may repeat its predecessors’ mistakes.

Observers of Sistani’s positions over the past 10 years may conclude that he embodies a unique role in the history of political-religious ties. He performs his social role, which is widely authoritative in Iraqi society, by influencing its popular base and by directing it to make the right decision. But at the same time, he seeks to avoid directly or indirectly interfering in the country’s political system.