Hamas is hoping to escape the anti-Brotherhood wave sweeping the Gulf and is trying to stay on good terms with Saudi Arabia. 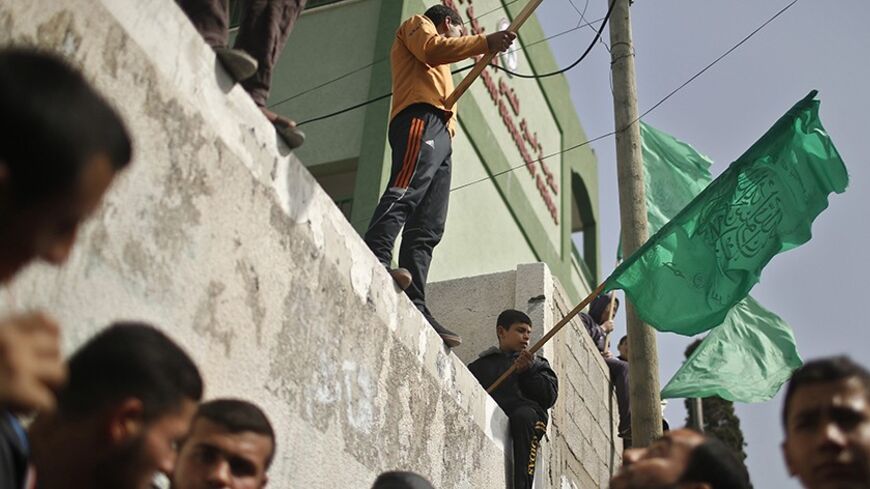 Palestinian Hamas supporters take part in a protest in front of the Egyptian embassy in Gaza, March 7, 2014. - REUTERS/Mohammed Salem

Saudi Arabia took Hamas by surprise with its unprecedented decision to designate a number of Islamist organizations — including the Muslim Brotherhood — as terrorist groups on March 7. The decision also affirmed that the Saudis would show no tolerance for any individual who belongs to, or is affiliated with, the named groups.

Even though the Saudi decision did not include Hamas by name, the latter regards the Muslim Brotherhood as its “parent movement” under Article 2 of its charter.

Adding to Hamas’ anxiety are comments made by a source close to Saudi decision-makers that the royal decree, which placed the Muslim Brotherhood on the list of terrorist groups, also encompasses its branches in other countries — including Hamas in Palestine.

While Hamas has not released an official statement commenting on the Saudi decision, an official in the party’s political leadership who resides outside Palestine spoke to Al-Monitor in a telephone interview about Hamas’ worries about a general anti-Islamist climate in the region as a whole.

“Hamas does not believe that the Saudi decision will extend to it, since its ideological affinity with the Muslim Brotherhood does not amount to an organizational affiliation. Hamas is a Palestinian national liberation movement. Even if it is linked by ideological ties to the Muslim Brotherhood, it is not bound by any administrative ties to the group, nor does Hamas have any organizational presence, office or bases in Saudi Arabia,” the official said.

Gaza Prime Minister Ismail Haniyeh quickly took the step of communicating directly with Saudi Foreign Minister Saud al-Faisal on Tuesday, March 11. He offered his condolences on the death of the latter’s brother in the first official communication conducted by Hamas following the Saudi decision, providing an indicator that the kingdom had not banned Hamas’ activities.

Ahmed Bahar, the deputy chairman of the Palestinian Legislative Council and a prominent Hamas leader, issued a direct appeal to Saudi Arabia on March 13, asking the kingdom to stand alongside the Palestinian resistance materially, morally, politically and economically. This marked an unusual step in terms of Hamas’ political rhetoric, which had typically directed such appeals to Egypt, prior to being banned by Cairo on March 3.

Nevertheless, Hamas’ “conciliatory” position toward the Saudi decision against the Muslim Brotherhood does not mean that it will not be harmed as a result. It is worth noting that Riyadh cannot take punitive action against Hamas, since there are no communications between Hamas and the Saudi government, and no Hamas official there has enjoyed an official reception by Saudi authorities. The sole exception to the latter came in February 2007, when Riyadh received both Hamas and Fatah officials for a reconciliation conference, known as the Mecca Accord. Since then, no Hamas official has visited Saudi Arabia in an official capacity, with the exception of Hajj pilgrimages to Mecca and Medina, and these visits were conducted without any political conversations being held.

As a result, political calculations in Gaza conceive of the Saudi decision as an upending of long-held positions and alliances, one that weakens the Arab standing, complicates the Arab political scene in the short-term and — from the standpoint of political, ideological and geographic dependence — complicates the Palestinian political scene. For Hamas in particular, the Palestinian situation will become increasingly complex and fraught with grave and severe consequences. The decision constricts Hamas’ freedom to maneuver and forces the Palestinian people to pay a heavy price both in security and economic terms.

Al-Monitor learned from sources in Gaza that a large part of the aid arriving to charities close to Hamas — including financial support — originates from Gulf countries, specifically Saudi Arabia. Princes, clerics and investors from the latter donate part of their money to support these charities, thus relieving Hamas of a huge burden, for the charities care for thousands of needy families in Gaza.

The same Hamas political official, in his interview with Al-Monitor, said, “An atmosphere of listlessness has dominated the relationship with Saudi Arabia for years.” He attributed this to “the faltering of Palestinian reconciliation efforts,” but noted that Hamas was “eager to resume relations free from tension with a great power” the size of Saudi Arabia. Indeed, “Hamas wishes to improve the relationship, despite the difficulty of the present situation,” he said.

“Despite the fact that relations between Hamas and Riyadh are now chilly, the movement possesses what it calls a wide ‘popular base’ drawn from both cultural and media elites, as well as wide swaths of the population within the kingdom [of Saudi Arabia], due its nature as a Palestinian national resistance movement,” he added. And despite some internal Arab polarization, “Hamas is insistent on getting through the crises now wracking the Arab world with minimal losses,” he said.

Hamas’ position toward the Saudi decision to criminalize the Muslim Brotherhood coincides with the withdrawal of Riyadh’s ambassador from Qatar on March 5, due to internal disputes over the Qatari position on Egypt, Syria, Al Jazeera and support for Islamist movements.

Despite rumors that Hamas political bureau leader Khaled Meshaal is seeking to exit Qatar to avoid being dragged into the Gulf feud over the Muslim Brotherhood, the Hamas leader is set to remain in Doha, according to a senior Hamas official.

“Meshaal had absolutely not requested to leave Qatar. The relationship between Hamas and Qatar is based on mutual respect between both parties. Meshaal has not been subjected to any pressure or harassment in Doha. He has not issued any request to leave Qatar for another country, due to the current tensions in the Gulf region and ongoing political unrest [elsewhere],” said the official, who spoke to Al-Monitor on condition of anonymity.

The official also disputed talk that Meshaal was under pressure from Qatar to leave, stressing the close relationship with Qatar's Emir Tamim bin Amad al-Thani. “The Qatari state provides Meshaal with all the freedom he has asked for, allowing him to perform all his duties without impediment. This is due to the close ties with the country’s leadership, particularly Emir Tamim.”