Hamas is concerned that the rapprochement between Egypt and Qatar will result in Doha downgrading its ties with the Palestinian Islamist movement. 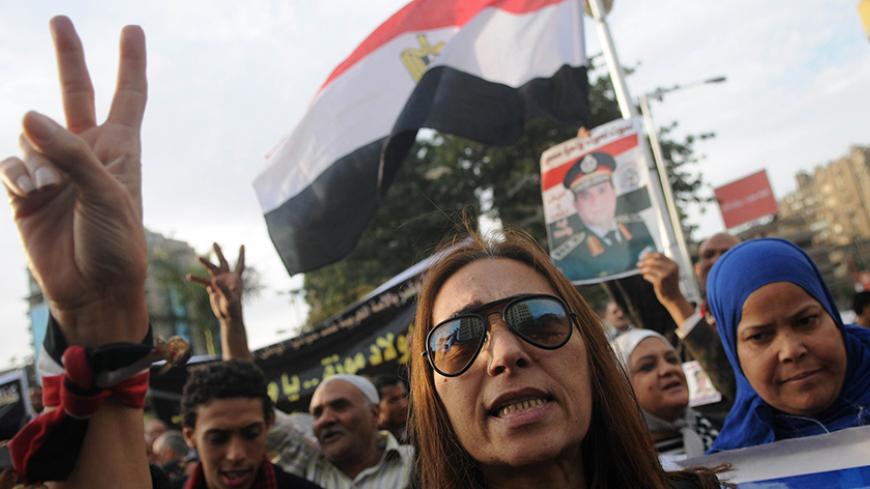 An Egyptian woman gestures during a demonstration against what protesters call Qatar's backing of ousted Egyptian President Mohammed Morsi's government, outside the Qatari Embassy in Cairo, Nov. 30, 2013. - REUTERS

At a time when Hamas is mending its relationship with Iran, Egypt and Qatar are also in the process of rapprochement after more than a year of tension. Resumed ties between them will likely have an impact on Hamas, but questions remain as to whether the Palestinian Islamist movement stands to gain or lose from this important regional development.

On Dec. 28, senior Hamas leader Mahmoud al-Zahar welcomed the Egyptian-Qatari convergence and denied Qatar was pressuring the Hamas leadership to leave Doha. He also denied reports that Qatar was planning to suspend its support for Hamas over the warming of ties with Egypt, reiterating that Hamas supports the unity of Arab countries to serve the Palestinian cause.

Yousef Rizqa, the former minister of information and political adviser to former Gaza Prime Minister Ismail Haniyeh, said in an interview with Al-Monitor, “The Egyptian-Qatari rapprochement serves the interest of the Palestinian national project, and Hamas has no concerns about its relations with Doha being harmed after the Doha-Cairo rapprochement because the movement is not a party to the internal Arab conflict, and it is accepted by the Arab capitals.”

However, an anonymous Egyptian official said in Dec. 26 press statement that Doha informed Hamas leaders that it would temporarily suspend its support for the movement in a bid to pressure Hamas to change its policies against Cairo.

Husam Badran, spokesman for Hamas and a resident of Doha, told Al-Monitor, “There is no suspension of the Qatari financial support for the movement, since their relationship is ongoing.” But Palestinian Minister of Labor Maamoun Abu Shahla revealed Dec. 28 that Qatar had postponed the financial grant supposed to be sent to Gaza’s state workers.

Rizqa neither confirmed nor denied this report, but he told Al-Monitor that Qatar has not cut its support and relationship with Hamas over the rapprochement with Egypt, saying, “The Hamas-Doha relationship is stable and Qatar's support for the movement is sustained and has never ceased. Moreover, Qatar’s position on Hamas is strategic.”

It is worth noting that Hamas’ fear of Qatar halting its financial support for the movement at Egypt’s request coincides with its renewed attempt to improve ties with Iran, as well as political head Khaled Meshaal’s recent visit to Turkey. Hamas may be reaching out to possible alternatives for regional support should Doha downgrade its ties with the movement in a "secret" deal with Cairo.

The Palestinian Authority did not express a position on the Egyptian-Qatari rapprochement, but on Dec. 25 Ambassador Hazem Abu Shanab, a member of the Revolutionary Council of Fatah, ruled out the consideration that the Egyptian-Qatari convergence would contribute to the improvement of relations between Hamas and Cairo, because this depends on how Cairo decides to deal with the Muslim Brotherhood and its affiliates, such as Hamas.

This prompted the Egyptian official to reveal Dec. 26, also on condition of anonymity, that Hamas demanded Doha mediate with Cairo to calm the atmosphere with Hamas, as the movement expressed its goodwill toward overcoming the tension with Cairo.

A senior Hamas official told Al-Monitor on condition of anonymity that Hamas is analyzing the extent of Doha's ability to influence Cairo on reconciling with the movement. Should the rupture between Hamas and Egypt continue irrespective of the Doha-Cairo rapprochement, this would be interpreted by Hamas as being made a scapegoat.

A former member of the Qatari Shura Council, asking not to be named, revealed to Al-Monitor, “There have been contacts made between the Hamas leadership, represented by Meshaal, and Emir Tamim bin Hamad al-Thani, among other Qatari officials. They discussed the rapprochement with Egypt. Meshaal told the emir that he fully supports any Qatari effort to unify Arab positions.”

The Qatari official told Al-Monitor by phone from Doha, “Meshaal received a formal Qatari pledge not to attack the Hamas leadership or tighten the noose around its neck in Doha in exchange for rapprochement with Cairo. This is because Qatar never establishes relations based on bargaining between one party or another, and our relationship with Hamas will continue to exist.”

Interestingly, coinciding with the rapprochement, Egyptian media outlets reported that Cairo threatened to cut ties with Hamas on Dec. 26 unless 13 accused members of the movement were extradited to Egypt. The 13 were accused of involvement in armed operations in Egypt, and allegedly, Egyptian authorities have insisted that extradition proceedings must conclude before they consider improving relations with Hamas.

A senior Hamas official in Gaza who spoke to Al-Monitor on condition of anonymity also denied the reports, saying, “Egypt made no formal request to extradite any Hamas member, and these accusations were featured across all media outlets, which only creates more tensions,” he said.

Ahmed Yousef, a senior Hamas official, told Al-Monitor that he hopes “the breakthrough in the Doha-Cairo relations will positively affect Hamas' relations with Egypt and that Qatar would do its best to alleviate the tension between Gaza and Cairo,” adding, “The Hamas and Cairo dossier is likely to be opened after the meeting of Emir Tamim with Sisi.” He denied the existence of contacts between the movement and Egypt following the Doha-Cairo rapprochement.

The timing of the Egyptian-Qatari warming may have come as a surprise to Hamas, which took nearly a week to announce that it welcomes the move, making sure that it would not come at its expense. The atmosphere prevailing within Hamas is still ambiguous over whether the Qatari position toward the movement will be affected, despite promises made by Doha to the contrary. Hamas knows that the pressure exerted on Qatar may be stronger than its ability to resist.