Hamas denies Qatar is pushing it to leave

Hamas officials have strenuously denied news reports that Qatar might extend its decision to expel Muslim Brotherhood leaders to include Hamas leaders residing in Doha. 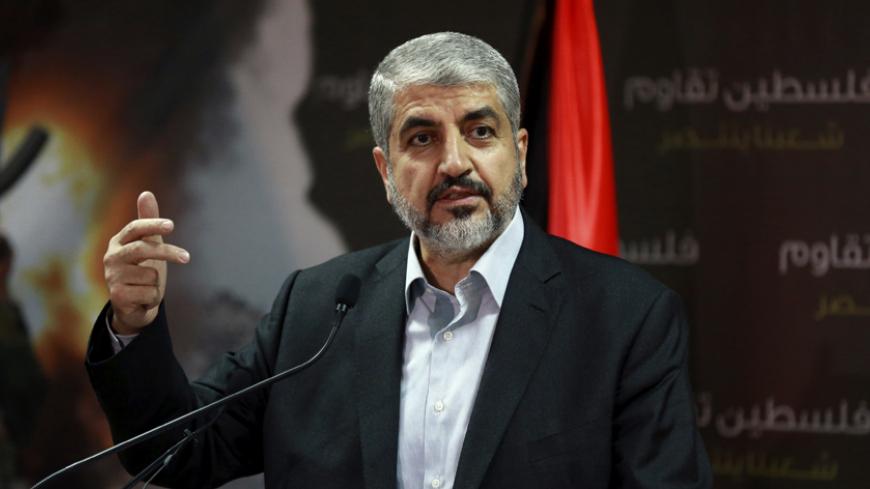 Qatar shocked many political circles on Sept. 12 when it asked several Muslim Brotherhood leaders to leave Doha in an effort to meet conditions for restoring ties with its Gulf neighbors.

On Sept. 14, leaks emerged that Qatar might also apply the decision to leaders of Hamas — who have been residing in Doha since leaving Syria in mid-2012 — in response to international pressure.

Speaking to Al-Monitor, Ismail Radwan, a senior Hamas leader and former Palestinian minister of Awqaf, who has been alternately residing in Beirut and Doha, denied that Doha has asked Hamas to leave its territory. He said, “The leaks [are] a desperate attempt to destabilize the ties between both sides, which are at their best.”

Ahmed Yousef, a former political adviser to former Hamas Prime Minister Ismail Haniyeh, told Al-Monitor, “Hamas did not receive any request to reduce its presence in Doha, and has not been under any pressure in this regard, particularly since Hamas political leader Khaled Meshaal has had close ties and mutual understanding and respect with the ruling family in Qatar for more than 20 years. Hamas and Qatar have strong political relations and understandings on the policies toward the successive developments in the region. Qatar sought to promote its role in the region when it hosted Hamas. Its decision to dismiss the Brotherhood leaders does not apply to the Hamas leaders.”

In his latest interview with Al-Monitor on Sept. 15, the deputy head of Hamas' political bureau, Mousa Abu Marzouk, denied that the Qatari action against the Brotherhood would be reflected in the country’s national policy toward Hamas.

Hamas’ reassurance that it was staying in Doha did not prevent a Hamas media official from telling Al-Monitor, “We are aware that the solid ties we have with Qatar explain the political pressure exerted on it by regional and international capitals that consider Hamas an enemy. Our respect for the Qatari position pushes us to understand any measure, regardless of the details. The movement has several alternatives in case it receives such a request, while maintaining our strong ties with Doha. We do not forget that Qatar was and still is a favorable environment for Hamas under such difficult regional circumstances.”

In a phone interview with Al-Monitor from Riyadh, a Gulf official who was informed about the reconciliation arrangements between Qatar and the Gulf countries, also said that the decision doesn’t apply to Hamas. “The presence of Hamas in Doha will not necessarily be affected by the inter-Gulf deal to restore ties with Qatar. The movement has good and developed relations with a number of Gulf countries, such as Saudi Arabia and Kuwait. The objection by the Gulf to Brotherhood leaders residing in Doha does not apply to the Hamas leaders,” the offical said.

The repeated denials by Hamas that Qatar was requesting it to leave its territory coincided with Meshaal’s surprise visit to Tunisia on Sept. 12, heading a large delegation.

Also on Sept. 15, Anwar al-Gharbi, the Tunisian presidential adviser for international affairs, also denied talks about the possible residence of the leadership Hamas in Tunisia, and said that Meshaal's recent visit to Tunisia is part of a follow-up on the Palestinian issue after the war in Gaza.

A senior Tunisian opposition figure, who spoke on condition of anonymity, told Al-Monitor, “The agenda of Meshaal's visit was not traditional. It was not only limited to a meeting with the president, as was the case during his visits to other Arab countries. He met with a group of pro-government and opposition political leaders.”

He added, “The Hamas leadership in Tunisia met with leaders of the Islamic Ennahda party, headed by Rachid Ghannouchi. At the same time, [Meshaal] met with leaders from the Congress for the Republic and the Republican Party to promote Hamas’ positions in front of the various Tunisian political forces, with the approach of the legislative and presidential elections in October.”

Al-Monitor asked a Hamas official about Hamas’ options in case Qatar does ask its leadership to leave — or at least to reduce its presence in Doha. He replied, “The movement does not have to tackle nonexistent hypotheses, at least at present. Yet, the fluctuating political positions in the region pushes us to be prepared for any scenario, even though it is unlikely to happen. We do have strong ties with many Arab countries, including Tunisia, Sudan and Yemen.”

Moreover, a Tunisian politician, on the condition of anonymity, told Al-Monitor, “In the past three years following the revolution, Tunisia has turned into a key center of activity for Hamas abroad, by organizing ceremonies, meetings and fundraising in light of the growing influence of Tunisian Islamists following the overthrow of the [Zine El Abidine] Ben Ali regime in early 2011.”

Should Hamas be forced to leave Qatar, it would add strain to the movement’s balance between its leadership abroad and those in Gaza.

Al-Monitor learned through discussions taking place in the Hamas corridors that the leadership’s movement from one country to another created a state of political and administrative confusion. Hamas’ settling in a particular place makes it easier for the movement to make decisions and plan medium- and long-term strategies. Having to shift bases in recent years prevented many Hamas leaders outside Gaza from enjoying the stability that the leadership at home enjoys.