Hamas could be next victim of Qatari-Gulf brawl 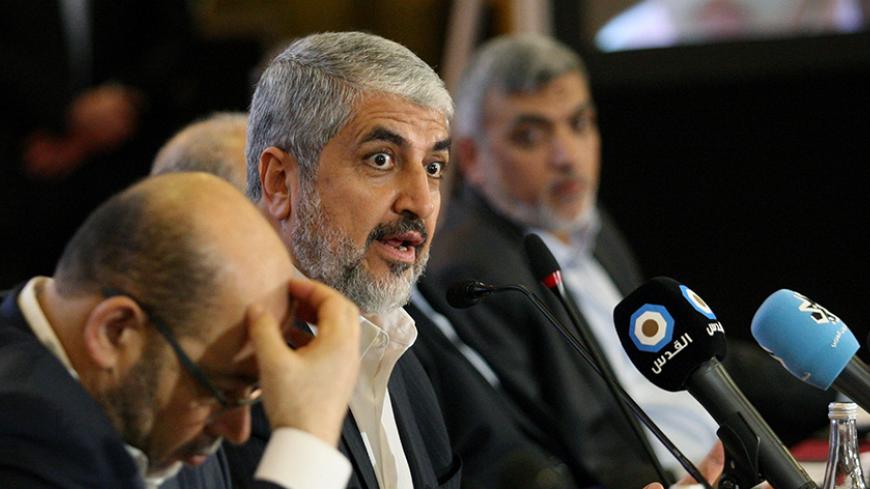 On June 3, media reports claimed Qatar had asked some Hamas officials to leave its territories after their names were listed alongside Palestinian detainees in Israeli intelligence investigations as being involved in armed attacks against Israel. Although no Qatari officials confirmed the news, other reports said Qatar expressed regret about having to make such a move because of pressure by foreign parties, who were not identified.

Hamas remained silent for an entire day before its spokesman, Hossam Badran, said such reports were aimed at ruining the movement’s image and influencing its foreign relations. However, he neither confirmed nor denied the reports, perhaps to avoid embarrassing either party.

Al-Monitor tried to contact some Hamas officials inside and outside the Palestinian territories to clarify the issue, but none would confirm or deny the reports.

However, Badran — a Qatar resident and former military official in Hamas — told Al-Monitor, “Hamas’ new leadership, elected in early May, began to arrange the activity of its leaders and their organizational functions in various geographical areas inside and outside the Palestinian territories to best serve the movement's interest." He added, “Hamas values Qatar’s support to the Palestinian people, especially in the reconstruction of Gaza and the constant support for the steadfastness of its people.”

Hamas spokesman Sami Abu Zuhri tweeted June 4 that Hamas' ties are firmly established with Qatar and other allied countries, and it will build good relationships with more countries as well. Betting on weakening and pressuring Hamas is doomed to fail, he said.

On June 5, the Israeli news website Times of Israel reported that the Hamas officials mentioned in the news were Saleh al-Arouri, a member of Hamas’ political bureau and a Hamas military leader who had already left Turkey in August 2015 because of Israeli pressure and Moussa Doudine, a Hamas official in charge of the prisoners’ dossier and a senior Hamas military commander who was released by Israel as part of a prisoners’ exchange deal in 2011. Al-Monitor interviewed Doudine in August 2015.

Meanwhile, the West Bank-based Al-Hadath newspaper reported June 5 that six Hamas leaders whose names were not mentioned had left Qatar a few days before and relocated to Lebanon, Malaysia and Turkey after Qatari authorities asked them to leave. Turkey has expressed strong support for Qatar in this matter.

Mustafa Sawaf, former editor-in-chief of the Hamas-affiliated Felesteen newspaper, told Al-Monitor, “This Qatari decision, assuming it was true, should not be perceived as the end for Hamas. This is not the first time the movement has been faced with such action; it was forced out of Jordan in 1999, it then had to leave Syria, and today Qatar is under pressure from Gulf countries and the US [to expel Hamas].”

However, he noted, “Qatar is still refusing to classify Hamas as a terrorist group. If the movement is given the choice of staying in Qatar or forcing the latter to suffer because of it, it would voluntarily choose to leave out of respect. Hamas can find an alternative because it is welcome in many countries. Although Hamas is suffering from a crisis, it is not alone."

The timing of Qatar's request wasn't surprising. It followed US President Donald Trump’s visit to the region May 20-21 when he met with Gulf and Arab leaders in Saudi Arabia and accused Hamas of being a terrorist movement.

This also coincides with the unexpected decision made June 5 by Saudi Arabia, Egypt, the United Arab Emirates and Bahrain to sever their ties with Qatar because of its alleged support for terrorist groups, without mentioning Hamas by name.

The Palestinian Authority did not officially comment on the matter. However, a member of the Central Committee of Fatah, Hamas' rival political party, told Al-Monitor on condition of anonymity, “Qatar has always supported Hamas at the expense of the Palestinian national project. Every time we get closer to reaching reconciliation with Hamas, Qatar swoops in and convinces it otherwise and urges it to continue to control the Gaza Strip and keep the division going, by providing financial support for Hamas’ rule in Gaza. Although this Qatari move [forcing out Hamas leaders] might harm Hamas, the movement might actually resort to reconciliation with Fatah after being abandoned by the last of its allies.”

Despite asking some Hamas officials to leave its territories, Qatar continued to praise the movement. On June 5, Jaber al-Harami, a prominent Qatari journalist close to the royal palace, told Al Jazeera, “Qatar had the honor to support Hamas because it is a Palestinian national liberation movement resisting the Israeli occupation.”

Many in Israel, unsurprisingly, welcomed the Qatari decision. On June 3, former Israeli Foreign Minister Tzipi Livni called it a very positive step because Hamas should not be given legitimacy. On June 4, head of the Israeli opposition Isaac Herzog called it an exceptional regional opportunity.

Yet Hussam al-Dajani, a political science professor at Al-Ummah University Open Education, told Al-Monitor, “Qatar will never give Hamas up. It is a country with foreign policy vision and will never abandon the movement. Hamas’ presence in any Arab country increases its position and role. But if Qatar is subject to external pressure, Iran will be the first to receive Hamas with arms wide open and Malaysia would follow.”

Regardless of which Hamas officials are affected by Qatar's decision, the regional campaign against Qatar seems quite fierce this time. This could force Qatar to give in and make things easier on itself by asking Hamas to reduce its total presence there without ending it altogether, although that might still restrict Hamas officials' movements between countries.

However, the newly elected Hamas leadership, represented at home and abroad by Yahya Sinwar and Ismail Haniyeh, resides in Gaza, which might dampen the consequences of Qatar's request.