Hamas is paying close attention to Israel's latest threats of military retaliation and a possible re-invasion of Gaza. 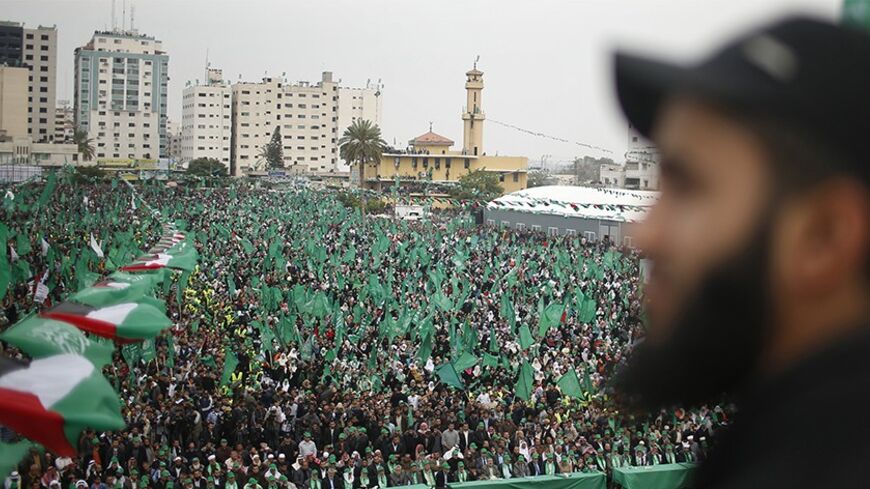 Supporters listen as Ismail Haniyeh, prime minister of the Hamas Gaza government, speaks during a Hamas rally in Gaza City marking the anniversary of the death of its leaders killed by Israel, March 23, 2014. - REUTERS/Mohammed Salem

GAZA CITY, Gaza Strip — In mid-March, Palestinians and Israelis fought another round that included the launching of dozens of rockets at Israeli settlements and Israeli attacks on Gaza.

This latest fight was expected to end in a fashion similar to previous ones, with an exchange of statements between Gaza and Tel Aviv. However, this time around, the latter raised the bar and issued threats about possibly occupying the Gaza Strip anew and purging it of its military arsenal and rocket-launching capability, as Foreign Minister Avigdor Liberman has called for.

In conjunction with these threats, the Izz ad-Din al-Qassam Brigades published a video showing its monitoring of an undated visit by Ya’alon to Gaza’s eastern border, where he was within range of the brigades’ snipers.

At the same time, the Israeli military conducted exercises March 19 for various combat units in areas adjacent to the Strip.

These events were followed by Israel announcing, on the night of March 20, its discovery of a new tunnel intended to carry out armed attacks. The tunnel reached hundreds of meters inside Israeli territory at a depth of 6 to 8 meters (20-26 feet) underground using large concrete blocks. The al-Qassam Brigades retorted that its discovery was caused by heavy rainfall and was not the result of an Israeli breakthrough.

Next, on the night of March 22, Hamas sent dozens of text messages to Israeli cellphones, threatening their users with being kidnapped and targeted, as reported by Al-Monitor’s Asmaa al-Ghoul and confirmed again by this correspondent.

Furthermore, Israeli threats to reoccupy the Strip were soon met by replies from the Palestinian side, led by Hamas Prime Minister Ismail Haniyeh. On March 23, in front of tens of thousands of his supporters at a Hamas-sponsored rally in central Gaza commemorating the assassination of the movement’s founder Sheikh Ahmed Yassin, Haniyeh said, “Any new aggression against the Strip would cost Israel dearly, because the resistance movement has capabilities beyond Israeli expectations.”

In this context, Al-Monitor learned that Gaza political and military circles seriously deliberated about the Israeli threats to reoccupy the Strip. Al-Monitor also saw a “situation report” issued by one of the military wings that stated, “Israeli threats are taken seriously, because they came in conjunction with successive military movements, both on the Gaza border and through internal maneuvers conducted by the Israeli military. Furthermore, any attack would be dependent on regional and international support. This is because Gaza — which is besieged, lacks strategic depth and is in range of artillery fire — is considered easy prey for being overrun militarily and occupied, with its defending force destroyed through military pressure and attrition.”

The matter reached the point where Al Jazeera, which boasts heavy Palestinian viewership, conducted an opinion poll on its website asking readers for their views on whether the “latest Israeli escalation was a precursor to an invasion of the Gaza Strip.”

While the prevailing feeling in Gaza is that Israel might move soon to attack Gaza, a Hamas official told Al-Monitor that the “surprises” promised by the movement leads him to discount the possibility of Israel attempting to re-occupy all of Gaza.

The official added that Israel reoccupying the Strip would cost it a heavy price that it prefers not to pay, and that the escalation is confined to sending messages urging the movement to cease its clandestine subterranean military operations. He further described Netanyahu, Ya’alon and Liberman’s statements as part of a psychological war waged on Gaza.

For its part, the Palestinian press has focused in the last few days on the threats to occupy Gaza. News shows have hosted military experts to speculate about the nature of the supposed occupation, as there is a prevalent fear that Israel might choose to suddenly escalate matters if a limited confrontation were to take place against Hamas. This could result in an escalation, perhaps with Arab support and funding, with the aim of ending Hamas’ rule of Gaza, as well as push forward an agreement between the Palestinian Authority and Israel. This would require doing away with the main obstacle standing in its way, namely the Hamas-led government of Gaza.

On the military level, Al-Monitor learned that to confront any potential invasion, the al-Qassam Brigades and other military factions were conducting daily military exercises to repel possible attacks, particularly in areas labeled “freed.” The latter include the settlements that Israel withdrew from in 2005, principally in the south, center and north of the Gaza Strip.

“These exercises come in light of our conviction in Gaza that any potential Israeli advance would aim to split the Strip along three main axes: southern, central and northern. This would require us to resort to guerrilla warfare tactics dependent on snipers, suicide fighters, anti-tank rockets, booby-trapped houses and roadside bombs, all of which would be aimed at exacting a heavy casualty toll from the Israeli army,” a military official in Gaza told Al-Monitor.

Al-Monitor obtained a military study delineating the expected operational reaction of armed factions in Gaza to a potential Israeli invasion. The study read: “The main objective of the coming war would be to regain the deterrence capability that faded after the 2012 war. The confrontation will be between two armies, and not between an army and guerrilla factions, in order to shock and traumatize the Palestinians and weaken their ability to retaliate by severing communications, electricity and satellite transmissions.”

The study, selectively distributed to members of Gaza’s military circles, concluded: “The coming Israeli invasion will occur through an armored push toward open areas east of the Strip in order to divide the latter and reach the coast, where land and amphibious forces would meet. This would lead the way to a wide-scale incursion into populated areas, where it will be difficult for the Palestinian resistance to utilize its weapons.”