Does the Turkish response in Crimea foreshadow an opportunity or a challenge for Russian policy? 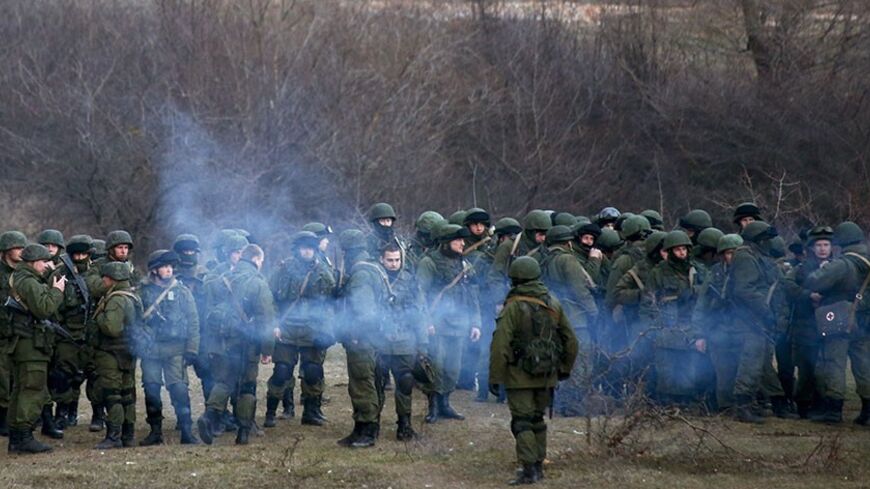 Armed men, believed to be Russian soldiers, assemble near a Ukrainian military base in Perevalnoe, March 5, 2014. - REUTERS/Thomas Peter

If the Balkans were once the powder keg of Europe, it is now the Ukrainian peninsula of Crimea that threatens to bring Europe, the United States and Russia to the brink of the second cold war. These days the analogies of the war of 1853-1856 are brought up quite often: Back then, the Russians hoped to deal an easy blow to the Ottomans but instead found themselves confronted by a coalition of the British and French empires and the Kingdom of Sardinia. Although direct parallels would be inaccurate, of about 16 wars fought between the Russian and Ottoman empires it was the battle over the Crimea that was a tremendous game changer in the European status quo and international system in general.

Indeed, the prospect of a complicated continuous standoff, or — God forbid — war, is worrisome. Although Turkey is not the main protagonist this time, it is the "gray cardinal" whose opinion is important to Moscow.

Certainly, the two are not on the same page in Syria and some other Middle Eastern matters; they have historically adversarial relations in the South Caucasus; and they have a conflicting modern record of Turkish support for Islamist and nationalist movements in the North Caucasus. But be it bilateral trade relations or pipeline geopolitics, instead of keeping in line with its NATO allies Turkey is more savvy in following its own national interests than many Western diplomats and analysts would like to think.

It is this niche that the Kremlin is trying to fill: In recent years, it proved effective in dealing with pragmatically oriented regimes, making all sorts of ideological alliances look lame. Moscow is not disillusioned about Turkey’s interests in the Crimea and its historic relations with the Tatars there. Moreover, discussions between the leader of the Crimean Tatar people Refat Chubarov and Prime Minister Recep Tayyip Erdogan on the restoration of rights of Crimean Tatars and implementation of humanitarian projects by international organizations and the Turkish government raised serious concerns among some influential Russian analysts, so much so that Crimean Tatars miss the days of once being part of the Ottoman Empire and want Turkey back in one form or another.

Neither is Moscow disillusioned about potential domestic limitations and ramifications in Turkey on this issue. But just like Tatars want to make sure Ankara is behind them in the conflict, Moscow wants to make sure Turkey shares its vision of “who the bad guys are.” Interestingly, the official ITAR-Tass press report of the phone conversation between President Vladimir Putin and Erdogan held on March 4 read: “Confidence was expressed on both sides that in spite of aggressive actions taken by radical and extremist forces from the Maidan (Kiev’s notorious Independence Square ...), interethnic and religious peace will eventually be guaranteed in Crimea." If indeed it was what the two parties agreed upon, Turkey’s balanced approach to date gives Moscow hope it will not be that much of a spoiler to the Kremlin policies if the situation in the peninsula exacerbates.

Ideally, however, in a worst-case scenario of a military intervention, Russia would like to see Turkey shut down its straits for US and NATO military ships, like it did with its airspace during the initial stages of the Iraq war. Recent reports confirm these expectations are not groundless.

If the current stalemate continues, Turkey will unlikely interfere beyond rhetoric and behind-the-scenes activity. But the crisis is spiraling swiftly, and if there is a full-scale armed conflict in the Black Sea involving NATO forces, Turkey, as a powerful regional player, will have a hard time outlining the best options for providing its own security and not upsetting its Russian partner and Western allies at the same time.

There is another dimension to it, which has to do with the larger question of construction of a world order. Now that the G-7 leaders declared they halted preparations for the G-8 summit in Sochi, the role of other institutions will rise for the Russian policymakers. In this respect, Moscow will throw more weight behind the BRICs (Brazil, Russia, India and China), the G-20 and the Shanghai Cooperation Organization (SCO) to promote its efforts for creation of a multipolar world even more vehemently. Russia needs more leverage at the international stage and certainly more political “think-alikes,” if not partners. Probably that is why Putin gave up on the idea of persuading the West of the legitimacy of his actions and started checking with the rising global (the Chinese) and regional (the Turks) powers.

For Turkey, the current crisis might be a surprising opportunity to breathe a new life into its Pan-Turkism ideology and a litmus test on how far it can go in implementing it. With the obvious domestic skepticism on the prospects for European integration, this dimension of Turkey’s path is blurred. So is that of the Middle East, where the hopes the Arab world had vis-a-vis Ankara in the wake of the Arab Spring are fading away. Against this backdrop, reviving Pan-Turkism is a way to put the country’s foreign policy on fresh ideological rails. It might also be a boost for the Turkish leadership as it enjoys more favorable ratings in Turkish-speaking communities outside the country than among domestic constituencies.

Nevertheless, depending on what line of behavior the Turkish leadership chooses, the once “sick man of Europe” might restore its historic influence in the peninsula and the wider Black Sea region, scoring points for other geopolitical venues.

In the long run, a more proactive Turkish policy in the Crimean crisis followed by a potential revival of Pan-Turkism would definitely represent a challenge for Russian interests in other areas of post-Soviet space — primarily the Caucasus and Central Asia, where the stakes for Moscow are extremely high.

But so far, the Kremlin perceives Ankara’s diplomatic language and modest stance on the conflict as the least of the two evils as opposed to the more confrontational reaction from the West. Time will tell, whether it was a shortsighted policy, a cunning strategy to drive a wedge in the NATO alliance or a tactic born out of necessity.