Turkey's limitations in the Black Sea and Crimea 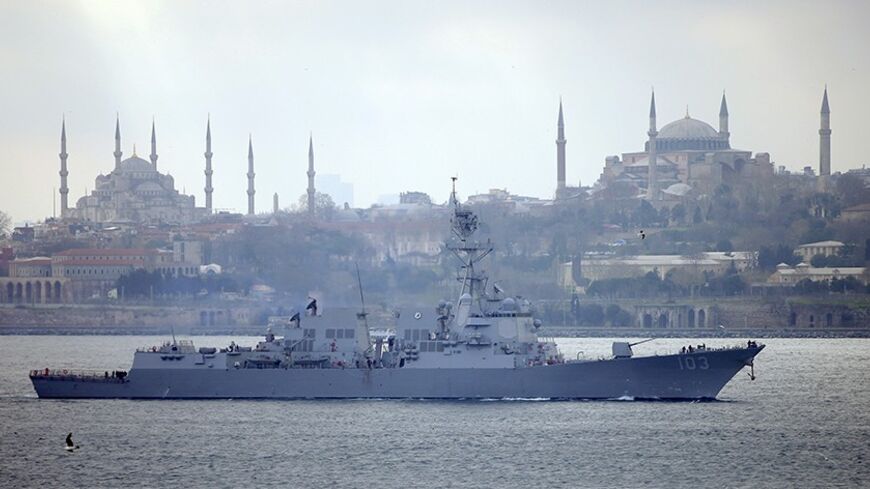 US Navy guided-missile destroyer USS Truxtun sets sail in the Bosporus, on its way to the Black Sea, March 7, 2014. - REUTERS

The title of the EurasiaNet article contained an element of black humor. It read, “As Black Sea 'Boils,' Turkish Navy Heads To … Africa.”

The humor is even more apparent in the lead paragraph: “A small Turkish naval flotilla is setting out on a three-month, 28-country circumnavigation of Africa. It will be the first time in 148 years that Turkish ships have rounded the Cape of Good Hope, and an ambitious demonstration of Turkey's rising ambitions in Africa. But the timing of the deployment is awkward, coming just as the security situation around the Black Sea is becoming more precarious.”

Not many people noticed this report. Turks are riveted by the upcoming March 30 local elections. They even refuse to show interest in events "next door." What makes this news report ironic is not only the security aspects it highlights, but that Turkey constitutes the entire southern coast of the Black Sea. The source of the precarious security situation on the Black Sea is Crimea, which is in close proximity to Turkey, with direct and short maritime links. Turkey also has truly deep and special historic and cultural ties with Crimea.

The Tatars, a Turkic community, were former inhabitants and rulers of Crimea. Crimean Tatars are one of the diverse peoples comprising the modern nation of Turkey.

Moreover, Turkey’s alliance with Western powers against Russian expansionism has some background in the Crimean War (1853–1856). Ottoman Turkey had been in conflict with Russia, and after war broke out, Russia lost to an alliance of Ottoman Turkey, France, Britain and Sardinia.

The Crimean War transformed the region. With this defeat, Russia ceased for a time to be a security threat in the Black Sea and to Turkey. Because of the battles, population exchanges and mass movements instigated by war, the present-day states of Armenia, Azerbaijan, Bulgaria, Georgia, Greece, Moldova, Romania, Turkey and Ukraine, along with the Crimean and Caucasus regions, changed in large and small ways.

The Crimean War represented one of the main causes of the demise of the Concert of Europe, the balance of power that had dominated the continent after the Congress of Vienna in 1815.

There are lots of intriguing elements analogous to the current conflict between the West and Russia over Crimea. Some believed that the post–Cold War period had ended, but the international system is now on the brink of a “neo–Cold War.”

The United States and Europe do not recognize the so-called referendum backed by Russian President Vladimir Putin that garnered 95% approval, reminiscent of the totalitarian Soviet era victories of 95%. Regardless, Putin then proceeded to sign a decree annexing Crimea to Russia. Will Turkey, as the spokesman for its Tatar kin, and the Western world, which considers the referendum illegal, go to war with Russia as during 1853–1856?

All seem to agree that war is not in the cards and that the United States and the rest of the West will commit themselves to what remains of Ukraine. In short, they will try to live with the sacrifice of Crimea. Russia therefore stands today as a country not to be contained by British, French and Turkish troops declaring war as in the mid-1850s, but one whose current gains from the Ukraine and Crimea can be reversed through long-term Western economic policies.

Another striking difference between the 19th and 21st centuries is that in 1856 in the aftermath of the Crimean War, France emerged as the ascendant power in Europe. Since then, the United States has surpassed Britain as a power, while in the Crimean crisis, Germany, not France, is ascendant in Europe. Also, Turkey of the 21st century, until recently criticized because of its foreign minister's pursuit of “neo-Ottoman” policies, does not possess the same clout as the 1850s Ottomans in international or regional politics.

The Turkish public, preoccupied with rough and turbulent domestic politics, has not taken note of this shortcoming, but the international actors reaping the by-products of the crisis — Russia and Ukraine and Syria — could not have missed it. Last week, Foreign Minister Ahmet Davutolgu, at a joint press briefing in Turkey with the Crimean Tatar leader Mustafa Cemiloglu [formerly Jamilev], said Crimea belonged to Ukraine and declared Russian claims to Crimea illegal. The Tatars today constitute only 10% of the Crimean population as result of ethnic cleansing that peaked during the Stalin era.

The uniting of Crimea to Ukraine was nothing more than a gift by the Soviet leader Nikita Khrushchev, himself a Ukrainian, to his homeland, not that anyone ever thought of relinquishing Crimea. In other words, it was not a matter of historical legitimacy and demographics.

Today neither the Ukrainians, Crimean Tatars, or Turks has the power to change the de facto situation created by Russia. Developments in Crimea, in addition to exposing a major limitation of Turkey’s ambitious and passionate foreign policy, also portend potential danger for domestic Turkish politics.

Former European parliamentarian Joost Lagendijk of the Netherlands told me that Western-Russian tensions in the Black Sea and Crimea might result in European politicians, notably German Chancellor Angela Merkel, ignoring violations against democracy in Turkey if it is deemed a necessary partner for Western security. Turkey's Western allies used to look to it during the Cold War years as the southeastern flank of NATO. Will they once again come to view it in such a light? Could Prime Minister Recep Tayyip Erdogan, proceeding down an anti-democratic path, benefit from this?

Crimea poses these questions for Turkey. There were no such issues for Ottoman Turkey of the 1850s. That war was won. This time around, the “Crimean War” has thus far proved that it is a non-winnable conflict for modern Turkey.