Netanyahu and Abbas are not Begin and Sadat

Documents released from Israel's State Archives this week on the Israel-Egypt peace negotiations reveal the commitment of both leaders to achieve such an agreement, unlike current negotiations between Israel and the Palestinians. 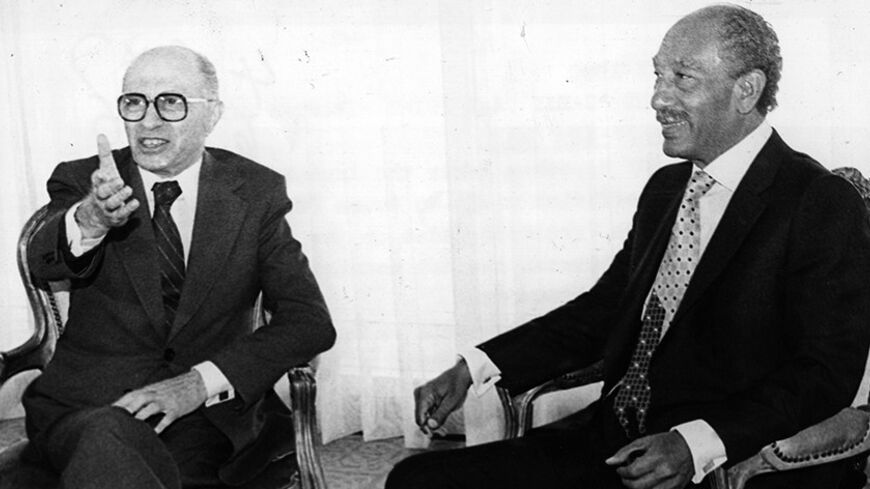 Israeli Prime Minister Menachem Begin and Egyptian President Anwar Sadat meet for talks about the normalization of relationships between the two countries. The meeting took place in Aswan in Upper Egypt, Jan. 1, 1980. In 1978, both men were awarded the Nobel Peace Prize. - Keystone/Getty Images

This week, on March 26, the State Archives released a series of secret documents to mark the 35th anniversary of the peace agreement between Israel and Egypt. These documents provide a fascinating glimpse into the turbulent negotiations that preceded the agreement. They also offer a point of comparison for the current negotiations with the Palestinians, which are on the verge of breaking down. Especially noteworthy is the function of leadership and how leaders perceive their historic role on behalf of their respective nations.

When examining the dynamics of these negotiations between Israel and Egypt — with all their crises and high points — the only possible conclusion is that the current talks between Israel and the Palestinians will not end in a permanent agreement or even a framework agreement, for that matter.

The unrelenting American involvement is indeed an important point of similarity in both cases. But the two current prime players, Israeli Prime Minister Benjamin Netanyahu and Chairman of the Palestinian Authority Mahmoud Abbas, have nothing near the readiness, the courage and the true willpower to reach an agreement — something that characterized the dialogue between late Israeli Prime Minister Menachem Begin and Egyptian President Anwar Sadat, who ultimately paid for it with his life.

In many ways, US Secretary of State John Kerry plays a tragic role in this saga. Like former President Jimmy Carter, who played a critical role in achieving the peace agreement with Egypt, Kerry, with the backing of President Barack Obama, considers a diplomatic agreement between Israel and the Palestinians to be one of the most important objectives of US foreign policy. Both then and now, there was total American involvement in the peace process, with the United States dedicating itself to the process, being prepared to provide its patronage to the talks and its guarantees to their results.

However, Carter had Begin and Sadat, two men who acted out of the realization that the peace agreement they would reach was a supreme strategic interest for both countries, who dedicated themselves to the peace process and succeeded in conducting a personal and direct dialogue based on mutual respect. None of that exists between Netanyahu and Abbas. There is a gaping chasm separating them. They despise each other, and their entire relationship is characterized by mutual distrust. Neither of them considers a diplomatic agreement to be an urgent or necessary step to advance the security, national or economic interests of their respective people.

Begin also faced political problems at home. He was the leader of the Israeli right long before he was elected prime minister, and the political ideology that guided him and his senior ministers was to preserve the Greater Land of Israel. Nevertheless, he was bold enough to take steps that ran counter to the desires and beliefs of his core electorate on the right. Then, like now, public statements by senior members of his Cabinet created tensions in the relationship with the United States. Still, the desire among all the parties to reach a solution caused the process itself to contain all these crises.

Standing on the other side of the barricade was Anwar Sadat, the leader of the largest Arab state, carried aloft by the glory of the 1973 war but also under pressure from the other Arab states, which demanded he link his peace agreement with Israel to a solution to the Palestinian problem, i.e., an Israeli withdrawal from Judea and Samaria. This alone could have prevented the negotiations from starting, but reality proved that both Begin and Sadat's passion for reaching a peace agreement was durable enough to push that issue aside.

Netanyahu and Abbas are not even able to put aside a declarative matter, such as the Israeli demand for Israel to be recognized as a Jewish state. If they really wanted to make progress, they would leave that issue for the end and make progress on all the other issues in the meantime. Just this past Tuesday, March 25, at a meeting of the Arab League, Abbas attacked Israel and accused it of stymieing the negotiations. He also made it clear that the Palestinians would never recognize a Jewish state, making it actually sound as if the negotiations were going backward, not forward.

In contrast, the Camp David documents provide endless examples of enormous crises that were resolved because of the genuine desire of both Begin and Sadat to sign a peace agreement. They also offer a glimpse into the internal problems that Begin and Sadat had to deal with — problems which, at any given moment, could have provided either of them with an excuse to withdraw from the negotiations.

At the height of one of these major crises during the negotiations, both the Americans and Sadat demanded that Israel withdraw from the West Bank as part of the agreement. This caused a huge commotion in Begin’s right-wing government, and for a moment it seemed as if all the achievements of Sadat’s historic visit to Israel were about to come crashing down against the ground in a Middle East already mired in conflict.

The documents describe the visit to Jerusalem by then-US Vice President Walter Mondale in July 1978. This visit took place against a backdrop of escalating tensions between Israel and the Americans, which were casting a shadow over the negotiations' atmosphere. Then-Foreign Minister Moshe Dayan met with Mondale and told him in a private conversation that he was insulted by the attitude of the US administration, which had accused Israel of being obstinate. “It is not within my purview to criticize the president. The prime minister can do that if he wants. … That does not mean that I am not worried. I sometimes feel insulted by what is being said in the White House. We don’t have to make peace with the United States but with the Arabs, and to a large degree, you are not helping with that. This results from your mistaken policy,” said Dayan.

The Israeli foreign minister added that American aggressive willpower was actually deleterious to the entire peace process: “You formulate the response and just tell us where to sign. We are looking for a way to continue the negotiations, and we have Sadat on one side, but we also have Prime Minister Begin.” Mondale tried to alleviate the tension by telling Dayan, “It hurts me to feel the mistrust that I sense here. I know that the president, me,and the entire American people have no bad intentions, but there is concern over how to expedite the peace process.”

After a tense meeting with Dayan, Mondale was invited to attend an Israeli Cabinet meeting, where the Palestinian problem that threatened the continuation of the peace talks was raised in all its fury. The crisis in the relationship with the United States was tangible. Dayan claimed that the issue of the West Bank was being used as leverage to extort Israel.

At that meeting, then-Minister of Agriculture Ariel Sharon embarrassed the US vice president and poured additional oil on the flames that were already lapping at the relationship between the two countries. Sharon attacked the US administration, saying, “It looks strange to belong to a nation, which is the only one, maybe in the world, that has to convince [sic] of its right to exist and its right for security.” He went on to argue that Cambodia and Lebanon both proved that it was impossible to rely on American security guarantees, and that the guarantees that Israel received in 1957, when it withdrew from the Sinai after the 1956 war, did not help it in 1967. Sharon then made it clear to Mondale that there was no way Israel would withdraw from the West Bank, and added that he was fearful of a situation in which Israel is pushed into a corner, where it is subjected to pressure: “That will not bring [us] to peace. That will bring [us] to war. Militarily Israel will win the war; no doubt about that. But all of us will lose. We will lose lives … And I am afraid to say that the United States will lose its foothold in the Middle East.”

It is well worthwhile to compare the role played by Sharon in assessing the relationship with the United States with the role currently being played by Defense Minister Moshe Ya’alon toward the friendly superpower. It is also worth noting that Ya’alon plays a much more senior role in the government than that played by the young minister Sharon. The Americans protested against Sharon’s remarks, and in a secret document that they sent to Dayan through the Israeli ambassador to the United States, Simcha Dinitz, they stated explicitly that Mondale was offended by them: “The only thing that offended him were Ariel Sharon’s remarks, which made it seem as if he was sent by the American administration to overthrow the prime minister, or as if that was the administration’s intention.”

History and these documents both show that Begin, Sadat and the Americans knew how to contain the many crises along the way. Much to the chagrin of the other Arab states, the Palestinian problem was left for future generations to resolve. The peace treaty that was signed on the White House lawn even managed to overcome the test of several revolutions in Egypt. In contrast, it seems quite obvious that neither Netanyahu nor Abbas believe in the negotiations forced on them by the Americans and just want to go home without any hassle. The two men can’t even agree on a formula to allow negotiations over a permanent agreement to begin.

There is a moment of grace in which bold leaders are capable of rising above their immediate political surroundings to achieve the long-term strategic interests of their people. Such a moment occurred between Begin and Sadat.

The person who best described the supreme importance of the leadership component in the negotiations with Egypt was the retired chief justice of the Supreme Court, Aharon Barak. At the time, Barak served as Begin’s special legal adviser to the peace talks. In a March 26 interview, following the release of the documents, Barak said, “I got to see the leadership of Menachem Begin, who led this entire process, and I saw it from up close. With regard to political, social and historic responsibility, as far as the people of Israel were concerned, everything depended on Begin. Nothing would have happened if he hadn’t agreed to it. The desire to reach a peace agreement and end the state of war between us and the Arab world burned within his soul.”