What Carter Can Teach Obama About Mideast Peace-Making

If President Barack Obama has no set objectives in his forthcoming trip to the region, he should learn from Jimmy Carter and get serious about Middle East diplomacy, writes Geoffrey Aronson. 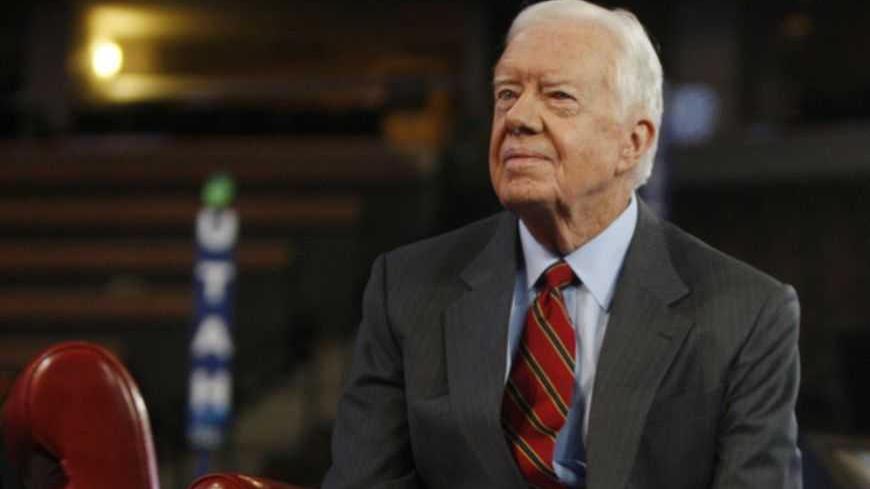 Israel's national archive has just released protocols of momentous discussions held during the two-day visit to Israel by then-President Jimmy Carter in March 1979. Carter traveled to Israel to lend the authority and prestige of the presidency to clearing the last significant obstacles to the realization of a historic treaty of peace between Egypt and Israel, which was signed soon thereafter on March 26, 1979.

The documents' release comes only days before the visit of U.S. President Barack Obama. The two events, separated by 34 years almost to the day, share a only a superficial similarity. Carter's assessment that an Israeli-Egyptian peace agreement was a vital interest to all parties, his determination to succeed despite all obstacles and his willingness to engage, confront and resolve obstacles that reluctant leaders placed in his path offer not only an instructive contrast to the upcoming Obama visit to Israel, but also an instructive example of presidential leadership that the current US president may want to emulate.

The United States was a latecomer to the process of rapprochement between Egypt and Israel. In the aftermath of the October 1973 war, Washington was wedded to a stale diplomatic process centered upon superpower collaboration at a Geneva conference. Egypt's then-president Anwar Sadat had other ideas: a separate, bilateral engagement between Israel and Egypt that would establish Egyptian leadership over the process and win for Egypt both an Israeli retreat from the occupied Sinai peninsula and a secure strategic economic and security alliance with the United States.

In the months following Sadat's dramatic visit to Israel in November 1977, the Carter administration embraced the process created by Sadat and then-prime minister Menachem Begin and Israel's foreign minister Moshe Dayan. In two weeks of grueling negotiations at Camp David in September 1978, Carter oversaw the birth of a framework that still remains almost four decades later. This is Washington's strategic keystone in the region, and a core interest of Israel and Egypt alike that weathered not only Sadat's assassination, the downfall of his successor and the rise to power of the Muslim Brotherhood, but also a relentless Israeli settlement program aimed at preventing Palestinian sovereignty in the West Bank.

Yet the formula reached at Camp David — U.S. support for a cementing of peaceful ties between Israel and Egypt and an ambiguous diplomatic formula for Palestinian autonomy on the West Bank and Gaza Strip — still required the detailed translation into a treaty of peace, a contentious and dramatic process whose success was not guaranteed.

When Carter traveled to Egypt and Israel in March 1979, the earth was shaking under his feet. Iran's Shah had been deposed two months earlier, heightening both the need for the strategic realignment promised by an agreement between Israel and Egypt and the cost of failure. The treaty talks, however, were deadlocked. Carter, frustrated by the inability of the process to overcome obstacles, substantive or otherwise, made the decision to travel to the belly of the beast itself as a dramatic demonstration of US commitment to charm, cajole and, if necessary, force the parties to address outstanding issues and finalize the treaty.

Before departing Washington, Carter declared, "I leave today on a new mission in the service of the oldest of human dreams — the dream of peace. Nowhere is the hope of peace more fervent, more alive, than in the Middle East. Nowhere is the path to the realization more difficult; nowhere might the price of failure be more terrible […]"

Today, the issues that then imperiled the process — the conflict between Egypt's treaty obligations to Israel and its Arab commitments, the timetable for an exchange of ambassadors, the extent of Egypt's role in Gaza and the West Bank during the autonomy process and Egypt's commitment to supply Israel with oil — are mere footnotes. At the time, however, they were a reflection of the parties' lingering reluctance to reach a historic accommodation and the continuing drive by both Sadat and Begin to dominate the negotiating agenda.

Carter's first stop was Egypt, where he remained for three days. Sadat rejected Carter's compromise proposals but empowered Carter to make a deal with Israel. An initial conversation soon after his arrival in Israel convinced Carter that Begin was trying to block a treaty. He decided to go over Begin's head in direct appeals to Israelis. Carter presided over an extraordinary meeting of Israel's entire cabinet, explaining to Israel's top readership that it was "now or never." Carter spoke of his admiration and support for Israel, but it was clear that he was not about to take "no" for an answer. When Begin at one point explained that the cabinet maintained its opposition to one of Carter's compromise formulas, the president bluntly told him to ask the cabinet to reconsider.

The discussions were pointed and well informed, but they were also marked by tension and often repetitive argument. At one particularly contentious point, Carter stressed the American interest in an agreement, saying, "[...] unless there is some assurance that the [Egyptian] negotiating team can have access to the inhabitants of the Gaza Strip and the West Bank, I do not feel that I can carry out my commitment to the American people, nor to you, nor to the Palestinian Arabs, nor to Egypt. It is a crucial issue to us, and I think it is something you will have to decide."

Begin replied: "Mr. President, we shall sign only what we agree to and we shall not sign anything to which we do not agree."

Just when it seemed that Carter would return to Washington without an agreement, a breakthrough was achieved. Carter and Cyrus Vance, the US secretary of state, offered mutually acceptable revisions to disputed treaty language and the removal of disputed language regarding Palestinian autonomy and oil supply to Israel. With Israel's agreement in hand, Carter returned to Cairo and obtained Sadat's agreement to the revisions.

"That is the best news of my life, wonderful news," said Carter when Begin called to tell him that the Israeli government had approved the latest proposals and the way was clear for the signing ceremony, which took place in Washington on March 26, 1979.

Carter played a critical role in reshaping relations between Israel and Egypt, but Washington's inability to deter Israel from its settlement agenda and refusal to entertain Palestinian sovereignty west of the Jordan River came into stark relief during the negotiations and still resonates today. Begin and Sadat, each for their own reasons, were determined to mend their bilateral relationship unencumbered by Palestine. Carter would have preferred otherwise, but the strategic prize so tantalizingly offered by an Israeli-Egyptian rapprochement proved all powerful.

President Obama is the latest president to inherit this problematic legacy. Palestinians enjoy autonomy on the minimalist model that Begin envisioned. Only in Gaza, where Israel removed its army and settlers, have Begin's expectations been confounded. Unlike Carter, who traveled to Israel on what he saw as a sacred mission, Obama, almost five decades later, is visiting Israel for unclear reasons.

One thing is clear, however: Listeners do not make history. Ask Jimmy Carter.