What Begin Would Have Told Obama

Shlomi Eldar considers what a meeting between former Prime Minister Menachem Begin and current US president Barack Obama would have looked like, being reminded of Begin’s meetings with President Jimmy Carter, which paved the way for a peace agreement with Egypt. 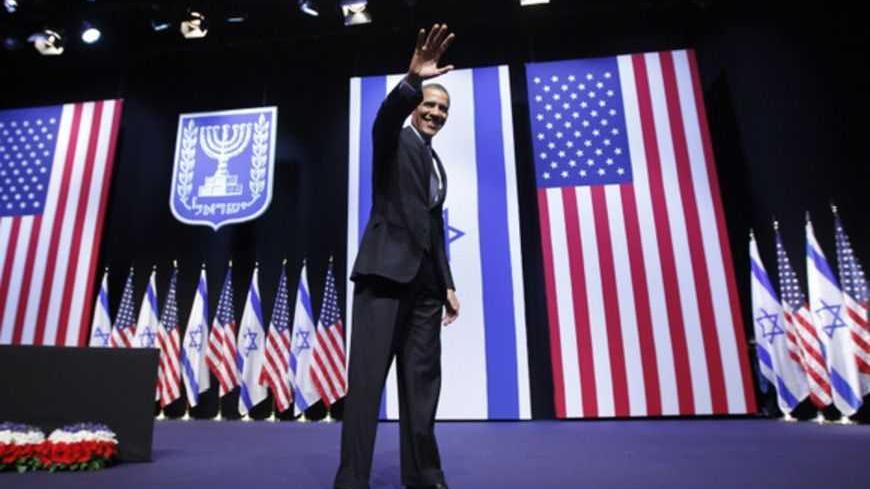 US President Barack Obama acknowledges the audience after delivering a speech on policy at the Jerusalem Convention Center, March 21, 2013. - REUTERS/Jason Reed

The truth is that I was very moved when President Barack Obama’s Air Force One set down on the tarmac of Ben Gurion Airport. Maybe it was because of the festive atmosphere: the IDF Band playing the national anthems of both countries; the honor guard standing at attention in fresh, crisp uniforms; and all the country’s political and military leaders standing beside the red carpet, waiting for a close-up view of the man who made history just by being elected president of the world’s greatest superpower. There he was: young, energetic, well-informed, and doing everything he could to prove that he is a true friend of Israel.

Still, his trip wasn’t all that successful until he gave his “Jerusalem Speech,” the day after his arrival [March 21]. In it, he kept giving us his solemn vow that he would guarantee the security of my country. What more did I need to get excited and to feel like I was “soaring on the wings of history,” as they say? When the presidential elections of 2008 were over, and Obama gave his victory speech in Chicago before thousands upon thousands of ecstatic Americans, even I shed a tear.

Israeli Prof. Avi Ben Zvi is an internationally acclaimed authority on American history. When I heard him on the radio, he sounded even more upbeat than me. “I am almost as excited as when late Egyptian President Answar Sadat landed in Israel (Nov. 19, 1977),” he said, and in the same context he recalled former President Jimmy Carter’s arrival in Israel (1979). This former American president who, together with Egyptian President Anwar Sadat and late Israeli Prime Minister Menachem Begin, completed the trio that signed the peace accord with Egypt.

But as Ben Zvi reminisced, Jimmy Carter also went over the heads of the country’s leaders, and more particularly the head of Menachem Begin himself, during one of the crises that preceded the signing of the accords. In his speech before the Knesset, Carter said explicitly what Obama only hinted at, and elegantly at that, during his speech at the Jerusalem Convention Center — that the people of Israel and Egypt are ready for peace, but their leaders have yet to prove that they are ready to take risks on the way to it.

It is interesting to think about how Carter would have expressed himself today if he was still president, and it is just as interesting to imagine how Begin might have received Obama. Would he have dared say, “Let’s keep focused on the Iranian nuclear program, and leave the Palestinians for later”?

Begin had no compunctions about attacking the Iraqi reactor in 1981, so it is reasonable to assume that he would not have hesitated to attack the Bushehr reactor either. And yet, even he would never have dared tell Obama, “There is no Palestinian partner for peace.” Known for his impeccable “Polish” etiquette, Begin would probably have bowed and told the American president: “All around us, the Arab world is on fire, and our fine young men need room to maneuver. They are prepared and ready to face the enormous threat from Assad looming along our border, and even, God forbid, from Jordan if the king finds himself collapsing under the burden of these uprisings. But what about Egypt? And the Muslim Brotherhood? And al-Qaeda? And the Global Jihad movement? God help us!”

Given this context, it is easy to remember how shocked Carter was when, in response to the pressure he put on Begin at Camp David to resolve the status of Jerusalem (September 1978), the prime minister told him the story of Rabbi Amnon of Mainz. Rabbi Amnon died a martyr, but only after suffering indescribable tortures (his arms and legs were cut off slowly) over his refusal to abandon his religion. As Begin’s Chief of Staff Yehiel Kadishai wrote, “After that, the Americans didn’t approach him about Jerusalem anymore.”

Begin would have also told the American president, “My dear Mr. President, my young friend, my country owes an enormous debt to you and your government, so if you came all the way here, putting all the other burning international issues on hold, let’s get down to business.” I don’t think he would have switched to slang by saying, “Let’s be straight with one another,” like Prime Minister Benjamin Netanyahu did, but whatever he said would have meant exactly that.

Everyone knows that the Camp David Summit gave birth to the peace accord with Egypt, but Netanyahu isn’t Begin and Obama isn’t Carter. At a press conference at the prime minister’s residence on the first day of the visit, Obama got up and used the most diplomatic language to relay the message that he knows the exact details … all the most intimate details.  To use a more slangy expression, he got up and said, “I’m no fool.” On an official level, Israel can holler till the cows come home that there is no partner on the other side, and that there is no one out there to engage in diplomatic negotiations. But Obama thinks differently, and he knows how to get his point across.

Barack Obama stressed the facts that not a single Israeli was killed in a terrorist attack in 2012, and that the West Bank enjoys a functioning government that is able to maintain security. He was referring to the forces being trained by US Gen. Keith Dayton to maintain public order and security in the West Bank, which the Obama administration currently funds. But even Gen. Dayton would not have been able to train these troops if Palestinian Liberation Organization Chairman Abu Mazen, the “non-partner,” hadn't prepared his people for that. President Obama is well aware of this, as is the new secretary of state, John Kerry, who is arriving in the region on Saturday [March 23] to take his boss’s achievements to the next level.

What Abu Mazen is really doing is slowly getting the Palestinians to forget about their dream of “Greater Palestine” and to think of Palestine within the 1967 boundaries. This is “Abu Mazen’s compromise.” It is the only chance he has to reach an outline that will ensure peace for his people.

Then came the “Jerusalem Speech,” and I was even more excited. Obama finally succeeded in winning over the Israelis. He managed “to embrace them,” as I keep seeing people write again and again.

Beyond all the warmth that emanated from the stage and back, Obama was very clear about his message. Anyone who thought that Obama in his second term would “buy” the Israeli claim that “there is no one to talk to,” was mistaken, and in a big way. Obama didn’t bother dropping hints. He was very explicit when he said that he will not give up on the Palestinian issue. True, Obama didn’t do what Carter did. He didn’t scold the Israelis. Quite the contrary, he actually “embraced them.” Still, he knows exactly what he wants, and he has already proved that when he wants something, “Yes, he can.”