Saudi Arabia and the United States have competing visions for the future of the Middle East, with Saudi regional policy deeply rooted in its own domestic concerns. 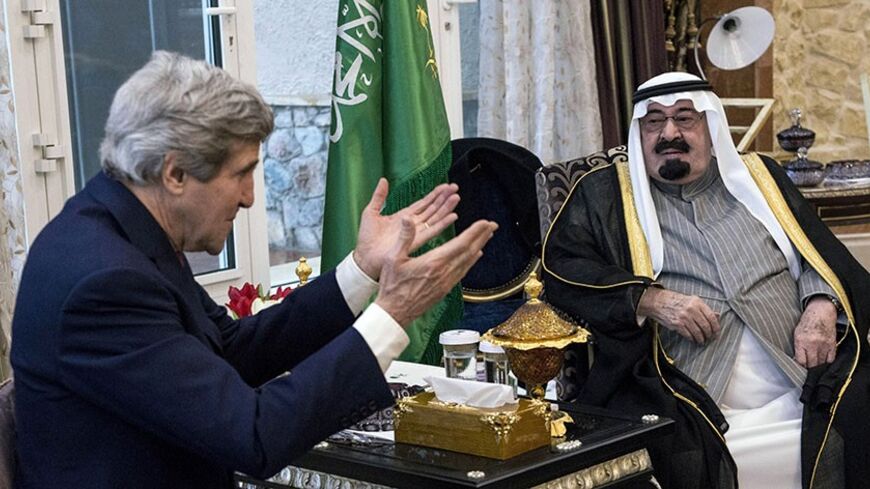 US Secretary of State John Kerry and King Abdullah of Saudi Arabia talk before a meeting in Rawdat al-Khuraim, Jan. 5, 2014. - REUTERS/Brendan Smialowski

As US Deputy Secretary of State William Burns explained in his Feb. 19 speech at the Center for Strategic and International Studies in Washington, combating extremism and containing its expansion in countries such as Syria and Yemen remain common goals shared by Washington and Riyadh. According to Burns, the United States, in partnership with Saudi Arabia and other Gulf countries, was trying to manage the transitional process taking place in the Arab world in a manner that would lead to the establishment of responsible, responsive and moderate governments.

Moreover, the United States sought to guarantee that the comprehensive political process in Egypt be welcoming to all, including the Muslim Brotherhood, and offer support to the Iraqi government by embracing Shiite political forces in order to distance them from Iran. This comes in addition to backing the Bahraini national dialogue in a manner conducive to achieving results that would lead to some measure of sustained stability.

But the dilemma lies in the fact that Riyadh views the changes taking place around it, and the American vision of the future, as threatening to its interests — or more precisely, the interests of Saudi political elites. As a result, any regional partnership with Washington in this regard would be very difficult to accept. It would entail that Washington, Riyadh or both review their stance vis-à-vis past and present events, or — a more likely scenario — decide to deal with contentious regional issues in a piecemeal manner.

To start with, Riyadh disagrees with Washington’s characterization of regional events. While the latter tends to view events as a manifestation of popular aspirations of freedom and dignity, Riyadh describes them as an amalgam of chaos and strife, devoid of any real substance.

And while Washington is of the opinion that political reform is necessary to achieve sustainable stability and safeguard existing regimes, Riyadh sees political reform as the potential root of instability.

In the framework of overall relations with Gulf countries, Saudi Arabia considers the American proposal to transform the Gulf Cooperation Council into a security organization similar to NATO as one that conforms to its own aspirations for the council. But this proposal, which would have been a major triumph for Saudi policy in the Gulf, was rejected by smaller Gulf states that saw in it a strengthening of Saudi dominion over them.

Furthermore, Riyadh’s opinion of the Iranian threat differs from Washington's. Saudi Arabia considers the growing political influence of Iran in the Arab world a threat equal to that of nuclear weapons, while the United States prefers to differentiate between Iran’s nuclear capabilities and its cultural, political or even religious influence in the region.

Riyadh also considers the growing Iranian influence a catalyst for its Shiite minority and an instigator for that minority to demand more political participation and religious equality in the kingdom. This, to Saudi Arabia, is a bigger threat to its security that any Iranian nuclear weapon.

In addition, Riyadh postulates that the Muslim Brotherhood’s ascendency in Egypt would afford the Sunni Islamist movement in Saudi Arabia great impetus by virtue of the great ideological links that exist among all Islamists and would thus threaten Saudi national security.

Saudi foreign policy cannot be understood without first appreciating its internal policies, and new Saudi foreign policies cannot be adopted prior to first adopting new internal policies. Riyadh’s foreign policy is an extension of its internal one, predicated on the interests of local Saudi elites. Riyadh’s view of external dangers and threats is but a reflection and an extension of its assessment of the internal risks and threats faced by the political elite.

In light of an entrenched conviction not to embark on any political reform programs that would expand popular participation in political life, the greatest internal threat thus remains the Shiite minority in oil-rich areas, and Sunni political Islam in all its forms. This point of view greatly explains prevalent Saudi regional policies.

Moreover, while Iranian influence reinforces the power of the Shiite minority, the ascendency of political Islam through democratic processes in the region would increase the power of that Islamic movement inside the kingdom. As a result, and according to this perspective, both confronting regional Iranian influence and thwarting the regional ascendency of the Brotherhood are inevitable, in order to achieve internal political goals. This dichotomy could thus lead to political confusion when a trade-off between the two options becomes necessary.

Saudi Arabia would not have cared much about confronting Iranian influence in the region, had it not been home to a Shiite minority that would become emboldened by that influence and seek to bolster its political role. Similarly, Riyadh would not have been much concerned about thwarting the democratic rise of political Islam had it not been worried that this ascendency would increase the influence of the Islamist movement internally, and tempt it to demand more power.

Current, Saudi foreign policy is not only the product of concerns about the country’s position on the regional scene. It stems mainly from concerns about the role and status of the political elite inside the state. This policy is also linked to the elite’s relationships with the two main parties in the stability equation, namely the Shiite minority and political Islamic groups.

US-Saudi consensus about the management of change in the Arab world — as Burns envisions it — is predicated on it being preceded by a transformation of the prevailing views about what has and is occurring in the region. This change is to be followed by an agreement about how to best deal with it. Achieving this concordance in views will not be easy as long as Riyadh insists on adopting the same internal policies that view any transformation toward a “quasi-constitutional monarchy” as a threat to its internal security. Any demands for such a transformation, according to the newly adopted anti-terrorism law, subject the perpetrator to charges of terrorism. As a result, Riyadh’s insistence on continuing with its current internal policies leaves it no option but to continue following its current foreign policies.

On the other hand, launching internal political reforms would achieve much in the way of foreign gains by facilitating the ironing out of differences with the United States over the region, whether concerning Iran or Egypt. This would also afford the Saudi state a historical opportunity to increase its regional influence, expand its soft power, bolster sustainable stability and perhaps neutralize some of the new players in the region. But it seems that the Saudi elites still have something different in mind.