Russia deals with rise in terrorism linked to Syria, Mideast

Fresh terror attacks have made Russia more concerned about the threat of Islamic terrorism and have shaped the country's policy in the Middle East. 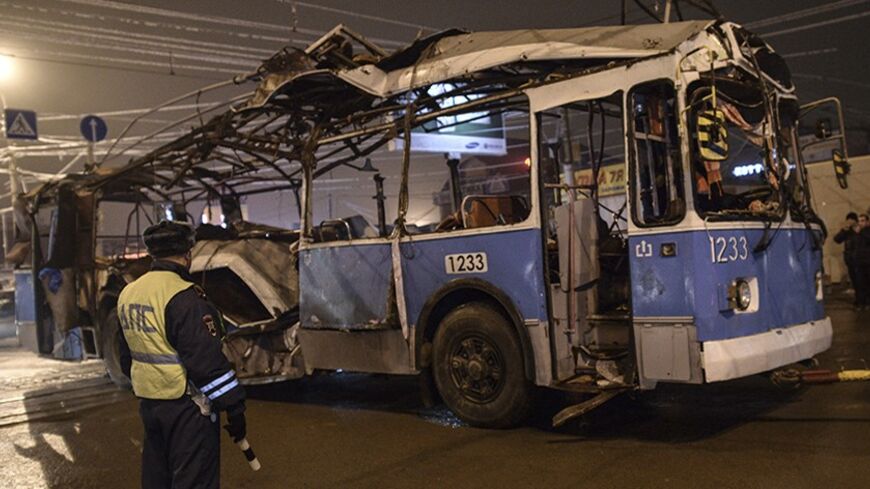 A policeman watches as a bus, destroyed in an earlier explosion, is towed away in Volgograd, Dec. 30, 2013. - REUTERS/Sergei Karpov

The growing number of terrorist acts committed in Russia by members of radical Islamist groups and transnational terrorist networks, heated conflicts between the bulk of followers of traditional Russian Islam and the few but active adherents of Salafism and the involvement of jihadists from Russia and the neighboring CIS republics in the Syrian civil war have all exacerbated the problem of Islamic extremism and terrorism for Moscow.

Within this Russian domestic problem, we can identify several dimensions that link it with the Near East:

First is the role of missionaries from Arab countries in disseminating radical ideas among Russian Muslims through the education system. Traditionally, Muslims in Russia who belong to Turkic ethnic groups (including the most populous group, the Tatars) practice Sunni Islam of the Hanafite school, and those living in the Caucasus Mountains practice Sunni Islam of the Shafiite school. A large number of Muslims also follow Sufi orders — Naqshbandi, Qadiri and others. When the Islamic revival began in Russia in the early 1990s, Arab preachers and teachers began coming to the country, and according to the memoirs of Ildus Fayzov, the former mufti of Tatarstan, local Muslims looked at them "almost as if they were looking at the Prophet himself." Those from outside started trying to introduce local Muslims to "pure Islam."

In 1993, the Saudi organization Taibah reached an agreement with the Yoldyz madrassa in Naberezhnye Chelny, the second-largest city in Tatarstan, under which the Saudis would provide educational assistance. This educational institution soon turned into a center for training radicals, some of whom fought in the Chechen war as part of jihadist militant groups and organized terrorist acts in Moscow. It was reported in the Russian media that the Taibah branch in Tatarstan was run by Isa Shebahat, a Jordanian citizen. In Tatarstan, a representative of the same organization, Algerian citizen Bu Setta Abd ar-Razzak taught at the Muhammadiya madrassa in 1994-1997 and sent young people to study at religious educational institutions in Saudi Arabia and Kuwait. This organization was banned in Russia.

The Yoldyz madrassa was closed entirely in 2000, and all of the foreign teachers who worked there were expelled from the country on the grounds that their activities were contrary to the values of the local Islamic Hanafite and Sufi traditions, and therefore they were spreading fitnah (discord) among the Tatar community. According to information provided by the Tatar scholar Aidar Khabutdinov, in the 1996-1997 academic year, of the eight teachers at the madrassa, four were from Arab countries — Egypt, Palestine and Jordan. At that time, alims and imams in the Volga region began sounding the alarm regarding the missionary activities of adherents of "pure Islam," who were starting to be conventionally called "Wahhabists."

The charitable foundation Al-Haramain, which was founded in Saudi Arabia in 1991 under the patronage of influential figures, was also banned in Russia. Representatives of this organization were also accused of recruiting believers to take part in the anti-Russian jihad in Chechnya.

In those years, Arab missionaries frequently organized youth camps to propagandize radical Islam and jihadist ideas. Today, that practice has been discontinued.

Of course, the authorities and the local clergy clearly understood that the foreign, and primarily Arab, teachers were bringing the seeds of aggression and hostility to local traditions. Moreover, such teachers would likely be needed in the future. But the intention is to place their selection and activities here under strict government control. Virtually all humanitarian assistance provided to local Muslim communities by the Arab world is already under control. In any case, the governments of Russia and most of the Arab countries have reached agreements under which such assistance will go through the channels of the state-created Fund for Support of Islamic Science, Culture and Education.

Second, another dimension that links Islamic extremism and terrorism with the Near East is the propagation of extremist ideas in the guise of so-called "pure Islam" through the Internet, and via the distribution of literature by charitable organizations based in Arab countries. In Russia today, active steps are being taken to prevent the distribution of this literature and block extremist websites.

Third, efforts by foreign emissaries to plan and carry out terrorist acts against the local Muslim clergy, which represent traditional schools of thought. In recent years, dozens of imams, Muslim scholars and journalists have been killed in terrorist acts in the Northern Caucasus. Even in the calm Volga region, there was an attempt on the life of Mufti Fayzov of Tatarstan in 2012, when a bomb exploded under his car. He miraculously survived but was forced to resign for health reasons. And his deputy, Imam Valiulla Yakubov, also a devoted opponent of Salafism, was shot by unknown assassins on the very same day.

Of special concern to Moscow is the growing number of Russians converting to Islam, a significant portion of whom have joined radical groups. Some of them have been involved in planning and carrying out terrorist acts in the country, including suicide attacks.

Fourth is the recruitment of local Muslims to fight on the side of extremist groups in the Near East, Afghanistan and Pakistan. Rais Suleymanov, a Tatar researcher from Kazan, reported that among the terrorist group members who visited Tatarstan in the late 1990s was an "al-Qaeda recruiter" from Egypt, Ahkmed Naser. He spent time in the region in 2004, was arrested after returning to Egypt, was in prison until 2011, was released and died "under mysterious circumstances" in 2012.

Today, the ranks of the terrorist organization Islamic State of Iraq and al-Sham (ISIS) and several other jihadist units include hundreds of people from Russia (about 250 from Chechnya alone, according to media reports). Among them, it is said, are ethnic Russians. Where will they go from Syria? The Russian authorities are asking themselves this question more and more often.

The investigation of the terrorists who committed the horrific terrorist acts in Volgograd in October and December, which killed or injured dozens of people, is uncovering threads leading to the Near East. Fears that such acts could be repeated forced the Russian authorities to take unprecedented measures to ensure security at the Olympic Games in Sochi. These measures were successful and yet did not give rise to complaints from athletes and guests.

At the same time, there are groups in Russian society that tend to exaggerate the terrorist threat from certain circles in the Arab world. Yevgeniy Satanovskiy, the former president of the Russian Jewish Congress, asserts: "The terrorists think they have already conquered Russia." This happened "in Afghanistan and during the first Chechen war. … In their opinion, it will not be hard for them to finish Russia off. Especially since they have cells operating all throughout the Russian Federation." The author accuses Saudi Arabia of supporting terrorism, along with Qatar and certain other countries.

The well-known Russian publisher Yuriy Mikhailov rejects these accusations, noting the important modernization occurring in the kingdom. For example, this year 30,000 citizens returned to Saudi Arabia after graduating from Western universities. "These people have come back to their country to develop it, and we know that the Saudis are investing enormous resources in higher education," he said. Mikhailov believes the position of people like Satanovskiy is explained by their Islamophobic orientation. As concerns the governments of Russia and Saudi Arabia, they are actually beginning to develop highly constructive collaboration to counteract terrorism.

Since the arguments about extremism, Salafism or "Wahhabism" show no signs of abating in Russian society, accusations of allegiance to these doctrines are often used as a weapon in the struggle for influence in the Muslim community, where dozens of muftiates are competing for control over the congregations.

One way or another, in the current situation the problem of counteracting extremism and terrorism in the Near East is more urgent for Moscow than ever before. To a large extent, this explains Russia's policy regarding the Syrian crisis and its efforts to ensure that the issue of counterterrorism is not taken off the agenda in discussions of that crisis among the international community.