The United States and Russia cooperate to combat terrorism in Syria. 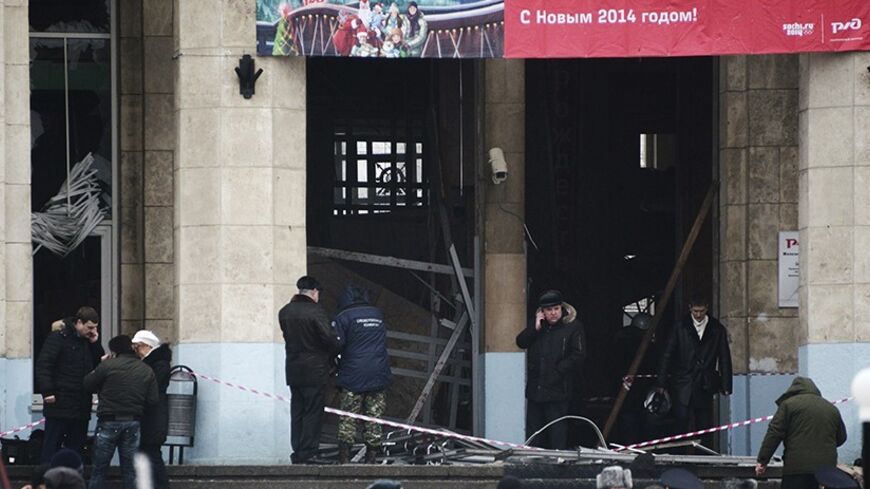 Investigators work at the site of an explosion at the entrance to a train station in Volgograd, Dec. 29, 2013. - REUTERS/Sergei Karpov

When the first of two terrorist bombings hit the Russian city of Volgograd, a wave of commentary and accusations spread across the Russian blogosphere. Many blamed Saudi Arabia, although it is unclear on what basis they did. According to them, Saudi Arabia is behind the Islamic underground in the Northern Caucasus, and the terrorist acts were revenge for Russia’s principled and consistent stand on the Syrian issue. One of the most popular commentaries gave a more detailed explanation: Allegedly, Riyadh was vexed by two failed visits to Moscow by the head of Saudi intelligence, Prince Bandar bin Sultan. He was not able to buy the Kremlin, so now the Saudis were making a point.

No evidence to support such speculation was offered, and no official pronouncements from which one might draw such an inference were ever made. True, the Ministry of Foreign Affairs reminded us that the explosions in Volgograd and the Middle East were organized by the same people. But that pronouncement was more likely made along the lines of establishing “international terrorism” as a phenomenon, which was common in the discussions of 10 years ago. So the rumors of Saudi Arabia’s participation were never confirmed. In other words, those rumors do not reflect reality, but rather how it is perceived. The Russian collective consciousness and internal processes, especially those related to the threat of Islamic extremism, are closely connected to foreign events.

The Russian authorities, which from the very beginning were not enchanted with the Arab Spring, have always explained their caution with fears that the region would become Islamized. Unlike most Western commentators, who saw in the stirrings in the Middle East highly promising beginnings of democracy, Moscow was certain that the only beneficiary of Arab democracy would be even more radical Islamic groups, fused together, well-organized and standing in solid opposition to the previous regime.

The Kremlin’s support of authoritarian leaders was to no small degree conditioned by its aspiration to maintain the regimes that were not only secular but also, according to their own ideology, stood in opposition to all types of Islamic influence. From that perspective, deposed Iraqi President Saddam Hussein, deposed Libyan ruler Moammar Gadhafi, deposed Egyptian President Hosni Mubarak and Syrian President Bashar al-Assad were optimal rulers. And many in Russia sincerely could not understand why the United States, during George W. Bush and Barack Obama’s presidencies, was destroying or helping destroy those particular leaders.

Iran seems to be the exception, and Moscow has had a constructive dialog with its Islamic leaders for a long time. There is another factor playing a role here, however. In the 1990s and 2000s, Tehran distanced itself from what was occurring in the Northern Caucasus and in Central Asia, processes that might have been harmful to Russia’s interests. So Iran did not try to destabilize the Islamic opposition in Tajikistan — quite the opposite, it helped stabilize the situation. The important thing is that Iran refrained from getting involved in the events occurring in Chechnya while other foreign players were, according to Russian intelligence agencies, fully involved.

The Russian authorities’ current sensitive treatment of the changes in the Middle East stems from the events in Chechnya on the cusp of the 1990s and 2000s. From their perspective, the growth of Islamic powers’ influence in the region will inevitably lead to an increase in direct or indirect support of the faithful in Russia, in the Northern Caucasus and in the Volga region. Starting in 1999, then-Prime Minister Vladimir Putin spoke more than once about the “arc” that would chop Russia in two — that would cut off the Asian part, so rich in resources, from the European part, where the majority of the population lives. This arc is exactly the one that appears, according to the current president’s version and that of like-minded people, as the result of radical Muslims joining forces in the Caucusus and the Muslim regions of the Volga, Tatarstan and Bashkortostan. Volgograd, where since October three significant terrorist acts have occurred, is the connecting link between two Muslim regions.

Significant terrorist acts in Russia and the United States usually have the same effect. They lead to discussions about increasing cooperation between Russian and US intelligence agencies in the fight against terrorism, because “We have yet again become convinced we have the same enemy,” and so on. The rhetoric is well-known. The same thing happened as recently as last spring, after the terrorist attack in Boston, as a trail was found leading back to the Caucasus. This time, Ministers of Defense Chuck Hagel and Sergey Shoygu talked about joining forces against terrorism. And now again, there is talk of security at the Olympics in Sochi, and the Americans say that they are ready to help.

Regarding cooperation, of course, if it has a place, then it is in a fairly limited volume of information that could be increased if necessary, up to a point. More than 10 years of experience with the fight against terrorism have shown that true collaboration is possible only between close allies who trust each other, which means they freely share information. (By the way, the Edward Snowden disaster has cast a shadow on that as well — Washington's trust in its European allies is now evoking serious doubts). If we are talking about countries that, for various reasons, treat each other with suspicion as a rule, there are more barriers on the path toward jointly fighting terrorism than there are reasons to collaborate.

It is true, sometimes collaboration is approached from the other direction — not from the desire to work together, but because there is no other way. The Russian-US joint work on the Syrian issue is an example. At some point, Washington realized that there were no good bets in the Syrian war. Supporting the opposition, which is obviously filling its ranks more and more with radicals, is absurd and harmful to US interests. This does not mean the United States has taken up the Russian position or is listening to the Russian arguments, but the evolution of the US approach has itself led to this conclusion. And the current efforts by Russian Foreign Minister Sergey Lavrov and US Secretary of State John Kerry to convene Geneva II are genuine. They actually want to achieve a result. Now Washington and Moscow, each from its own perspective, presume that changes in Syria will make things worse, strategically speaking. This is also true from the point of view of the terrorist threat to Russia and the United States.

During the Cold War, everything was easier. The world was divided in half and the principle of “the enemy of my enemy is my friend” worked. Now that has all fallen apart. The enemies of the United States and the Middle East are, in substance, Russia’s enemies, just as Russia’s enemies in Volgograd view the United States as their own. This does not mean Russia and the United States will become friends, but they may start interact more on particular issues. Now, when the relationship between the two countries lacks the rich content it used to have, and has stopped being long term and is becoming more situational, we need to strive to at least collaborate for specific purposes.