Russia's controversial policies in the Middle East have brought increasing friction with Saudi Arabia — both in the region and inside Russia — to new heights. 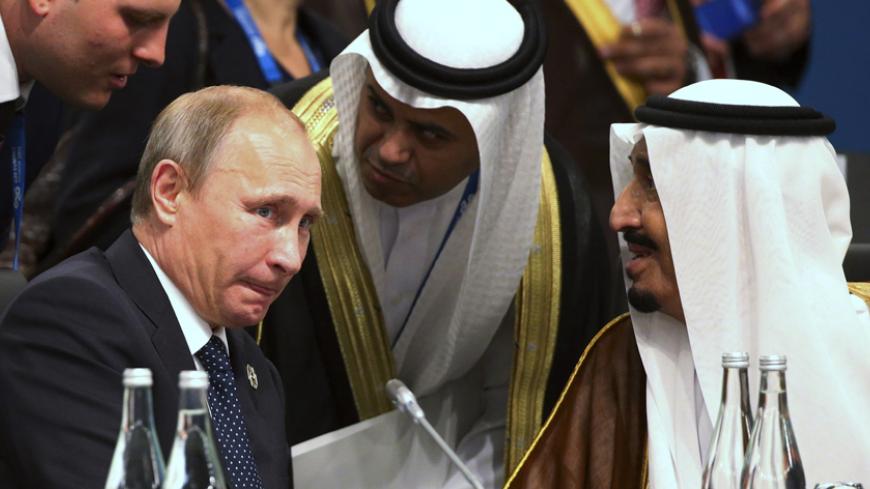 While the United States is widely considered Russia’s principal rival in the Middle East, Saudi Arabia may well be taking second place. Moreover, not unlike Moscow’s suspicions toward Washington, Russian officials and analysts have often seen a Saudi hand in problems closer to home, in Russia’s neighboring countries and even within Russia itself. Russian-Saudi tensions thus seem unlikely to lessen anytime soon.

Some of the strains in Russia’s relations with Saudi Arabia derive from the kingdom’s long-standing role as one of America’s closest and strongest allies in the Middle East.

Yet, even as Saudi Arabia’s alignment with Washington frustrates Russia in some areas, Riyadh’s differences with the United States — such as over its aid to Syrian militants that neither Washington nor Moscow find to be acceptable — create trouble in others.

Saudi Arabia’s Cold War-era cooperation with the United States in supporting Afghanistan’s mujahedeen fighters against the 1979 Soviet invasion is the foundation for much of Russia’s distrust of Saudi Arabia. This is less a historical grievance, however, than a long-term and continuing problem for Russia, in that it ultimately contributed to a civil war in post-Soviet Tajikistan, an ungoverned Afghanistan exporting extremism, the spread of terrorists and drugs across the Eurasian space, and — after the attacks of Sept. 11 — a long-term US and NATO presence in Central Asia.

Worst of all from a Russian perspective has been the spillover from Afghanistan to Russia’s own North Caucasus regions — especially Chechnya, but also Dagestan and Ingushetia. Russian officials have long argued that al-Qaeda terrorists from Afghanistan have not only operated in these regions, but assisted in attacks in Moscow and other cities across Russia.

At times, Russia’s suspicions have also extended to Saudi nongovernmental organizations (NGOs) operating in Russia. While US and European media have focused almost exclusively on Russian concerns about Western-funded pro-democracy groups operating in the country, former Federal Security Service Director and current Secretary of Russia's Security Council Nikolai Patrushev has in the past specifically accused the Saudi Red Crescent (and a handful of Western NGOs) in public remarks as being involved in “espionage operations” with the goal of “trying to weaken Russian influence in the former Soviet Union and the international arena as a whole.” Patrushev suggested that the groups were behind unrest in Georgia, Ukraine and Kyrgyzstan in 2003-2005.

Saudi Arabia’s competition with Iran creates additional problems for Russia. Immediate among these is likely the civil war in Syria, in which Riyadh is of course extensively supporting forces seeking to oust President Bashar al-Assad, whom Russia and Iran are helping to stay in power. Given the tight limits on what the United States has been willing to do for the anti-Assad coalition in Syria, Saudi Arabia has been essential in preventing its defeat and — from Moscow’s point of view — in creating the pre-conditions necessary to establish the so-called Islamic State. As Alexey Pushkov, chairman of the State Duma’s Committee on International Affairs, said recently, the “Islamist or Wahhabi monarchies in the Gulf like Saudi Arabia, Qatar, and Bahrain, they seek to model the Syrian regime after their own” and “the armed opposition … are the same kind of people who blow up American soldiers in Afghanistan and Iraq, and kill NATO troops in Afghanistan.”

At the same time, Riyadh is looking for allies against Iran inside the former Soviet space — particularly in Azerbaijan, which borders Iran to the northwest.

The Saudi role in Afghanistan can of course also be interpreted as an effort to encircle Iran and ensure that Tehran’s leaders must look not only west but east.

Finally — and most damaging at present — many in Moscow suspect that Saudi Arabia is deliberately depressing oil prices to damage Russia’s economy, either on its own or in collaboration with the United States. The Russian Institute for Strategic Studies, which some see as linked to Russia’s intelligence services, recently published a study making this case. A spokesman for state-owned oil company Rosneft likewise accused Saudi Arabia of “political manipulation” of the oil price. Patrushev has publicly attributed the collapse of the USSR to a similar plot.

Despite deep Russian concerns over Saudi conduct, Moscow clearly views the kingdom with respect as a formidable player. After all, with an economy only one-third the size of Russia’s — and about one-fifth its population — Saudi Arabia has an annual military budget that ranks just behind Russia’s (Moscow’s is the world’s third largest, and Saudi Arabia’s its fourth largest) and is only $8 billion smaller. At the same time, Saudi Arabia’s better-run oil-dependent economy has outperformed Russia’s for most of the last decade, including during the two oil price collapses in 2009 and today.

One mark of this respect was the fact that Prime Minister Dmitry Medvedev attended King Abdullah’s January 2015 funeral. Another is that in each of five different stories about Abdullah’s death, the Russian state media agency ITAR-TASS referred to the late monarch as “King Abdullah, one of the world’s most powerful people.” This is no accident. President Vladimir Putin himself said, “The deceased king was known as a wise and consistent statesman and politician, a leader loved and respected by his people and had a deserved authority on the international scene.”

Indeed, perhaps most interesting is the extent to which senior Russian officials have refrained from publicly criticizing Saudi Arabia and its leaders — they are not nearly so shy in expressing their views of many other US allies. The fact that Putin and Foreign Minister Sergey Lavrov are this careful suggests that notwithstanding widespread negative attitudes toward the kingdom’s foreign policy, Moscow is not eager to provoke Saudi Arabia any more than is necessary. From a certain perspective, that might just be the highest form of respect the Russian government can offer.