Russia's Fear of Radical Islam Drives Its Support for Assad

It was no coincidence that Russia vetoed a Security Council resolution on Syria just hours after twin attacks on moderate Muslim officials in a central Russian republic last week, writes Amal Mudallali. Russia does not see itself as an ally of Assad, but as a target, like him, of an extremist Salafist terror plot to destabilize Russia. 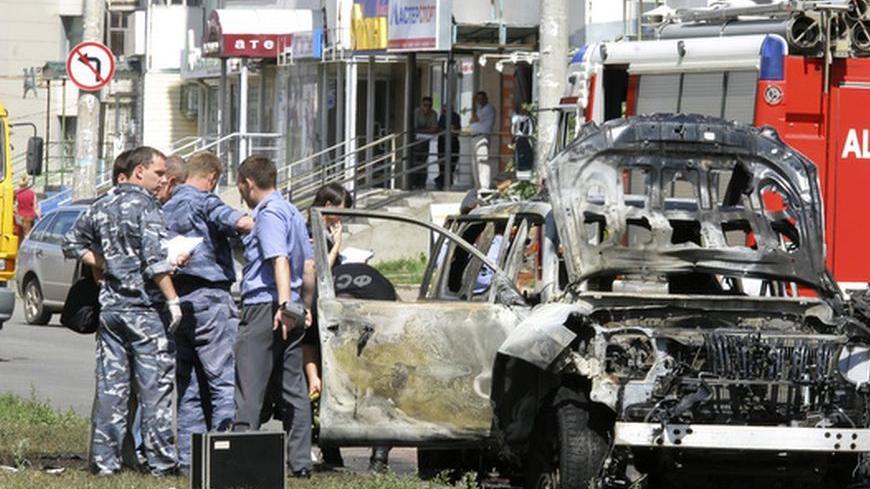 Russian investigators work near the scene of a car bomb blast in the city of Kazan July 19, 2012. The most senior Islamic official in Russia's largely Muslim Tatarstan region was wounded in a car bomb attack and his deputy was killed in a separate shooting. - REUTERS/Aleksey Nasyrov
Amal Mudallali
July 26, 2012

It was no coincidence that Russia vetoed a Security Council resolution on Syria just hours after twin attacks killed a moderate Muslim official and injured the Mufti in the central Russian republic, Tartarstan, last week. Russia sees the assassination as a direct attack on moderate Islam by Islamic radicals. And the veto, Russia’s third since the Syrian crisis began, is grounded in a deep-rooted policy of war against one enemy: Islamic radicals.

Russia supports Syrian President Bashar al-Assad because of a strategic relationship and what it views as the same fight in Syria and Russia against the Salafi and extremist Islamic threat.

Since the beginning of the Syrian revolution, Russia has accepted the official government line and branded the opposition as terrorists, Islamic radicals or Salafists. A wide array of explanations have been given by Russia, as well as the West,  for its support of Assad, some of which are to the detriment of Russian interests in the Arab world. They cited strategic assets that the Russian Navy has in a Mediterranean seaport, arms sales to the Syrian military, a general East–West rivalry, and even Russian President Vladimir Putin’s refusal, “on principle,” of the removal of national leaders by outside intervention. But the Russian position is actually rooted in a deep-seated fear, and sometimes paranoia, of the spread of Islamic radicalism.

This factor in defining Russian policy has received scant attention. Russia does not see itself as an ally of Assad, but as a target, like him, of a Salafi-terrorist plot to destabilize Russia — just as they are doing in Syria, with help from the West. Even when regime forces massacred over 100 women and children in Houla, the Russians blamed the Wahabis, the Saudi form of Islam. After 18 months of bloodshed and over 15,000 dead, it becomes increasingly difficult to reconcile Russia’s reading of the situation in Syria with Assad’s brutal one.

Putin’s government sees the Islamic threat as one of the most important challenges to the Russian state and its neighboring countries. Most of these states have restless, largely Muslim, populations and one form or another of dictatorship. So the Russians are fearful that change in these countries might bring Islamic radicals to power and Russia will be encircled by extreme Muslim regimes.

A Russian source I spoke with saw the conflict mainly in sectarian terms and expressed fear of Saudi interference in Russian affairs. He was concerned that Saudi Arabia “will go back to ignite the Islamic question in Russia.” He said that American and Saudi calls for Assad to step down are “motivated by their desire to bring Syria back to the Sunni camp.”

Russian officials blamed Islamic radicals for the attacks in Tatarstan. The first reaction to the bombings from a local Russian official source hinted at an outside hand, in an interview with Interfax news agency. The source said that the deputy Mufti and head of Islamic education for the region, Valiulla Yakupov, who was killed “was one of the strongest supporters of the campaign against Wahabism and he considered them a threat to Islam.” The region’s leader linked the attacks to chief Mufti Ildu Faizov’s work to promote moderate Islam. Faizov, according to news reports, had mounted a crackdown on extremists among the Muslim clergy of the Republic. He was quoted as saying that the main threat comes from followers of radical forms of Islam, Salfism and Wahabism. These people, for him, “constitute a very great danger,” he said in an AFP story last year. “There are no moderates among them. They all finish one day by taking up arms.”

Putin saw the attack as a “serious signal.” The Russian president told lawmakers that the government was “aware of what is going on in some Russian regions, but being aware is not enough. It is necessary to understand the situation, analyze it and make timely decisions.” Putin did not spell out what decisions he might make, but if his response to the Chechen situation is any guide, a lot of blood will be shed in Tatarstan if he sees a real threat.

An expert on Muslim affairs in Russia, Roman Sitantyev, told the Washington Post that what happened in Tartarstan is “the beginning of a total war against Islam in Russia…by Islamists.”

The oil-rich state of 4 million people, half of them Muslims, was seen as a place of tolerance and coexistence between Christians and moderate Muslims. But this haven began to morph after the collapse of the Soviet Union, when Islam flourished with new-found religious freedoms. In Tatarstan many were attracted to “puritanical Islam,” rooted in “simplicity” and, hence, to Salafism, according to the paper. This raised red flags and some Russians complained about Saudi missionaries preaching their Wahabism.

The Russians see a direct Saudi role in this rise of extreme Islam not only in Russia but in the whole region. They accuse the Gulf countries, mainly Saudi Arabia and Qatar, of being behind the spread of Salafi Islam in Libya, Syria and other parts of the Middle East, and even in Ethiopia. “The Saudi charitable organizations spread Wahabism,” a Russian source told me. When I told him that the Salafis are a minority, he answered “the Bolsheviks were a minority and they took the country.”

A Russian source in Moscow I spoke with this week said there is a camp in Russia that supports closer relations with Iran and Middle East Shiites. This camp counts in its membership military, political, media and think tank advocates. “In modern Russian history, we do not have experience with Iran and Shiite groups interfering in our affairs to destabilize Russia,” another Russian source  told me. “[Iran] might give money to build a mosque, but we are not afraid of them because they do not interfere in our affairs as the Saudis and the Qataris did in the past and could do again.”

But this does not mean that Russia considers Iran a “loyal friend.” It is all about interests. Iran and Russia have strong historic as well as business relations, and Russian observers point to the absence of any meaningful trade or business interests between Russia and the Gulf countries as one reason Russia is taking a non-compromising position. They complain that Russia has almost no trade and business relations with the Arab World, especially the Gulf. The cancelation of the meetings between Saudi businessmen and a trade Russian delegation last month over the Russian position toward Syria is just one example.

The Russian fear of Salafi Islam and the perceived Saudi influence in Russia and Asia minor, where large Muslim populations live, also shape Russian policy toward the Arab Spring. They point to Tunisia, Egypt and now to Syria and see only a threat of an Islamist take-over as detrimental to Russian stability and strategic interests in the region. This led to further deterioration in the relationship with Saudi Arabia because of Russia's continued support for Assad even after over 15,000 Syrians have been killed. The Saudis, like the rest of the Arab world, see that the Russians are prolonging the suffering of the Syrian people by continuing to block the Security Council.

One reason alone cannot explain the unprecedented support that Russia has given to Assad and his regime. But the common disdain they both harbor for Muslim radicals and the Salafis makes them comrades in arms and complicates any possible diplomatic solution to the conflict. Three Russian vetoes, 15 months and thousands of dead later, should convince those who are still counting on a Russian change of heart to start thinking of a different strategy.

Amal Mudallali is a senior scholar at the Woodrow Wilson International Center for Scholars.