A central goal of Russia's Syria policy is to relegitimize the Syrian regime in the eyes of the United States and its allies in the region, and oblige them to recognize it as an ally in the fight against extremism. 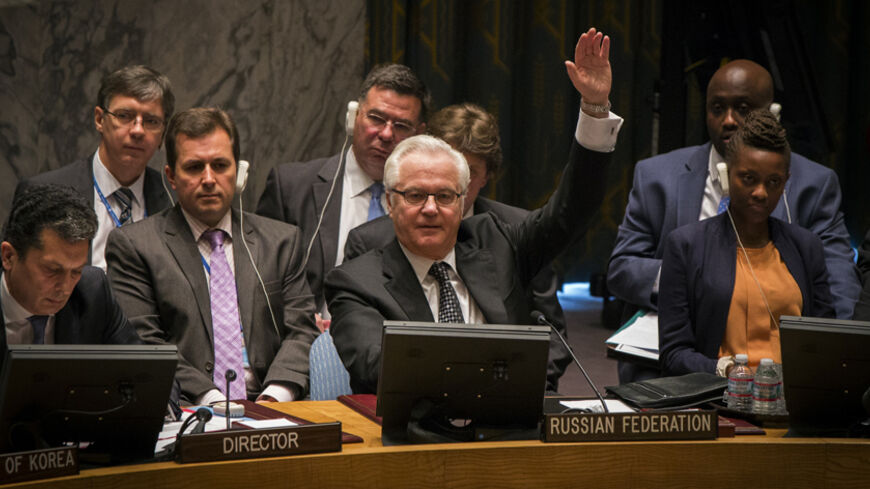 Russia's UN Ambassador Vitaly Churkin votes in the UN Security Council against referring the Syrian crisis to the International Criminal Court for investigation of possible war crimes at the UN headquarters in New York, May 22, 2014. - REUTERS/Lucas Jackson

Nowadays, skepticism is growing among Russians about the likelihood that the United States and its coalition allies can put an end to the Islamic State (IS) with airstrikes alone, as is alarm at the increasing number of citizens from several Arab countries and members of Islamist organizations who sympathize with the caliphate project.

IS practice tells us in increasingly convincing terms that we are dealing with a state-building project, rather than just the conspiracy of fanatics. As it is known, the number of Islamist organizations that have joined or merged with IS has already passed the dozen mark. The most serious in this series of declarations of allegiance is that of the Taliban leadership, which suggests a de facto extension of IS jurisdiction to Pakistan and Afghanistan. This is not just a franchise, like al-Qaeda.

Another disturbing though expected twist is IS’ intention, declared on Sept. 22, to carry out terrorist acts outside the states that have been its theater of operations until now, namely Iraq and Syria. According to Charles Lister, "Islamic State’s advances across Iraq and its expansion in northern and eastern Syria have placed it in control of territory stretching at least 680 kilometers (423 miles). Its focus on controlling resources means it now earns between $1.5 million and $2 million per day."

Heated debates continue in the Russian media around events in the Middle East. On an Echo of Moscow blog, Georgy Mirsky — a well-known critic of Moscow’s Syria policy — writes of "Syrian perfidy" manifesting itself in a declaration by Syrian Foreign Minister Walid Moallem. He writes: "The Syrian government, for whose sake Russia has done absolutely everything — from vetoing UN Security Council resolutions one after another to preventing a US bombing campaign via sly maneuvers with chemical weapons — this same [Bashar al-] Assad government forgets everything and treacherously enters into an alliance with the US."

I think that the author’s irony is misplaced. He has not understood that both positions — Russia’s, which criticizes launching airstrikes on Syria without the approval of Damascus, and Syria’s, which effectively supports the actions of the coalition — serve the same purpose: to relegitimize the Syrian regime in the eyes of the United States and its allies in the region and oblige them to recognize it as an ally in the fight against extremism. It is even conceivable that Syrian and Russian officials coordinated their public statements.

Moreover, according to analysts in Moscow, Russian criticism of US actions in Syria (but not in Iraq) should emphasize the double standard in Washington’s and the EU’s policies. On the one hand, Washington and the EU have accused Russia of sending troops to Ukraine (which Russia vehemently denies) and have even imposed sanctions because of this. Yet, on the other hand, they themselves are carrying out attacks on Syrian territory without the consent of its legitimate, internationally recognized government. Russia has also taken note of the fact that Barack Obama’s speech at the UN General Assembly did not mention Syrian President Assad himself. Does this mean that, in the new situation, the mantra "Assad must go" has outlived itself?

At the same time, according to rumors circulating among foreign diplomats in the Russian capital, Moscow appears to be growing increasingly frustrated with Damascus’ utterly uncompromising position vis-a-vis establishing any kind of contact with the constructive part of the domestic Syrian opposition. The Russian side has called for such cooperation in the search for a political solution to the Syrian crisis that takes into account the interests of the regime. Damascus has reason to believe that the airstrikes deployed by the United States and its allies on IS positions will somehow weaken both IS and all other opposition forces. In particular, the military potential of the Free Syrian Army, according to Damascus, has been practically reduced to almost zero.

However, I have heard from militants who fought with an Islamist unit that losses in the Alawite core of the army and security forces are nearing "the red line." (This is contrary to the popular belief in the West that the victims of the conflict are almost without exception opponents of the regime from among the Sunnis — the casualties among those who fight on the regime’s side are almost the same.) Islamists do not fear high casualties and hope that in the course of a long and bloody war they will simply deprive government forces of human resources, thus leading to the regime’s military defeat or implosion. However, I believe that reliance on disproportionate losses as a source of victory is not only horribly cynical but also counterproductive.

In the Russian business community — where, as in Russian society at large, sympathy is traditionally strong for Syrians as is endorsement for a consistent policy of support to Damascus — it has been bitterly noted that the Syrian government alone cannot keep the country from a humanitarian disaster due to the massive destruction of all elements of economic subsistence in the war: infrastructure, electricity and oil and gas production. As it is known, IS has seized control of facilities for the extraction of energy resources, and US airstrikes have partially destroyed such infrastructure, which someone will have to eventually restore. As David Stewart writes in New Eastern Outlook, Russian energy companies are not optimistic about the possibility of working in Syria: "So, another Russian company — Soyuzneftegaz — because of international sanctions and reputational risks, had to give away at the final stages of contracting the project for the development of the Mediterranean gas block 2 to another larger Russian investor."

Foreign fighters in IS units, Jabhat al-Nusra and other radical groups are also a subject of growing concern for Russian authorities and civil society. It is no coincidence that debates have grown heated in Russia about the situation of the country’s domestic Muslim community, where missionaries of international extremist organizations have long been trying to create pockets of influence. In this context, the attention of analysts has been drawn to the ongoing criticism of Tatarstan’s Muslim clergy and part of the ruling elite of perhaps the wealthiest subject in the Russian Federation by certain representatives of some analytical centers.

Thus, Rais Suleymanov of the National Strategy Institute — which is close to the Kremlin and led by Mikhail Remizov — writes: "Domestic policy failures linked to the strengthening of radical strands of Islam in Tatarstan … have forced the spin doctors at the domestic policy department of the presidential administration of the Republic of Tatarstan to find new ways to preserve the positive image of the republic."

Suleymanov has gained a reputation as an uncompromising critic of ethno-nationalist and Wahhabi displays by the elite of the Volga region. However, not everyone in Tatarstan and Moscow agrees with splashing such harsh criticism in the print and electronic media.

In March 2013, Suleymanov had said that members of the Bulgar Jamaat had moved to Syria. Those were "armed units of Russian Wahhabis who fought in the ranks of the Taliban and had resettled in Degon in Pakistan after US troops had entered Afghanistan in 2001." He reported that, among the most famous Russian Wahhabis fighting in Syria against Assad, in addition to the Chechens and Ingush, was Ayrat Vakhitov (AKA Salman Bulgar) from Tatarstan, who engaged in public relations work for the rebels on the Russian Internet. "Having combat experience, these mujahedeen — the author wrote — can join the Wahhabi underground in Tatarstan, thereby expanding activities in the Volga region," Suleymanov writes.

And today, this expert claims that even after the replacement of the former mufti of Tatarstan, Gusman Iskhakov — whom Suleymanov and his associates actively accused of sponsoring the Wahhabis — with a new one, Kamil Samigullin, little has changed. Suleymanov writes that under the new mufti "Wahhabis have been integrated into the structure of the Spiritual Administration of Muslims of Tatarstan."

At any other time, such fierce criticism of the situation in Tatarstan would have been regarded in the federal center as a dangerous destabilizing blow to the stable situation in this prosperous republic. The clear threat posed by the homecoming of Russian Muslims who are already fighting in the ranks of IS, however, urges us to view the harsh outbursts of the Tatarstan expert as a kind of valuable warning to those who continue to turn a blind eye to this threat.

In Russia, also, special attention has been devoted to the focus of the world media on those IS fighters who have been gaining fame for their exceptional brutality after IS' capture of Mosul, such as Chechen Muslim Abu al-Waleed Shishani, formerly Murad Margoshvili and who has a Che Guevara status among jihadist militants in Syria, and Chechen Muslim Omar al-Shishani, formerly Sgt. Tarkhan Batirashvili in the Georgian army. The blast that was carried out Oct. 5 — a public holiday — near the concert hall in the Chechen capital, Grozny, by a 19-year-old suicide bomber recently recruited by an international jihadist network, and which killed five people and seriously injured 12, has shown that the Russian public’s fears are not unfounded.