The 2013 murder of a prominent ethnic Chechen in Ankara may have been a retribution for his opposition to Chechen involvement in the jihadist war in Syria. 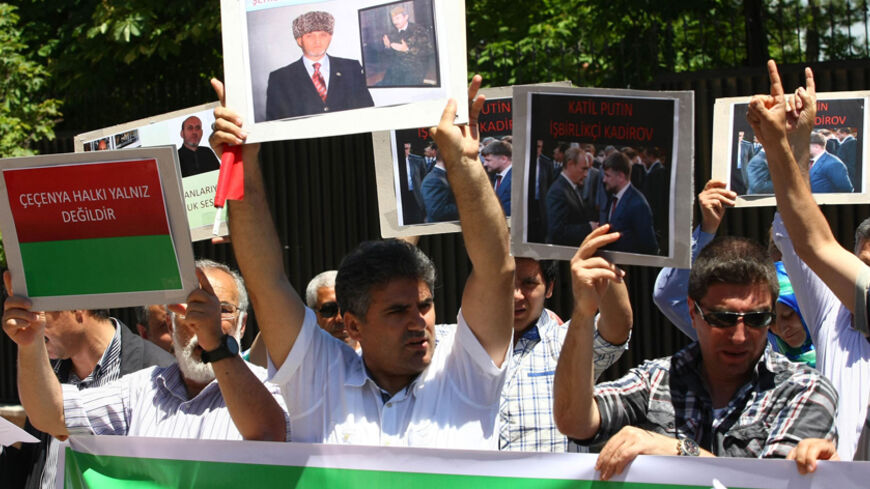 Protesters hold images of Medet Unlu, a Chechen activist based in Turkey who was killed as they protest his death outside the Russian Embassy in Ankara, May 25, 2013. - ADEM ALTAN/AFP/Getty Images

ANKARA, Turkey — In a string of assassinations reminiscent of spy thrillers, six Chechen exiles were gunned down in Istanbul in 2008-11. The murders, blamed on Russian secret agents, were almost forgotten last year until a Turkish-born Chechen, a vocal advocate of Chechen independence and an influential figure in Turkey’s ethnic Caucasian community, was killed in his office in downtown Ankara. The suspicion quickly focused on Russia again.

But in a surprise twist more than a year later, the victim’s family and lawyer have asked the prosecution to follow a new line of inquiry: Medet Onlu, they suspect, was killed because he was an obstacle on the “jihadist highway” to Syria, opposed to Chechen rebels exiled in Turkey joining the war. They claim a systematic effort is underway to cover up the murder.

“Onlu’s stand against the exploitation of Chechens in Syria was very important. … In the Caucasian community [in Turkey], he was a person in a leadership position who took the risk of taking a stand against this,” lawyer Erdal Dogan told Al-Monitor by telephone. “We have serious suspicions that people in public office … made way for the murder and we believe they are still impeding the capture of the suspects.”

Chechen fighters — some battle-hardened, others wannabes — figure prominently in jihadist ranks in Syria, often credited as fierce combatants and military strategists. As Al-Monitor’s Vitaly Naumkin writes: “They didn’t come to Syria from Russia … but from Georgia, Turkey and European countries that once provided them refuge as freedom fighters.”

The number of Chechen refugees in Turkey is estimated at 2,000, including members of the extremist Caucasus Emirate who fled Russian crackdowns. At least one of the six Chechens killed in Istanbul was a senior commander in the group. Turkish prosecutors have accused Russian intelligence for four of the murders in the only court case to have been opened so far.

Ankara denies it has backed or turned a blind eye to the jihadist flow to Syria. Yet, various media have amply reported the crossings and Turkey has faced mounting international pressure to seal its border.

One Turkish charity dedicated to helping Chechen refugees — the Humanitarian Defense and Fraternity Association (Imkander) — has stood out with its explicit support for the jihad in Syria. In February, for instance, it organized a gathering in an Istanbul mosque to commemorate Seyfullah al-Shishani, a Chechen commander killed in Aleppo. "Long live our Syria jihad," the crowd chanted as Imkander Chairman Murat Ozer praised Shishani, recounting how he spent time in Turkey before the war and later escorted Imkander aid workers in Syria. Shishani “showed the world what a great service Chechen mujahedeen are doing to the Syrian jihad,” Ozer said. He then introduced Shishani’s young son to the crowd, saying the boy accompanied his father in Syria “to savor the smell of jihad.” In July, the charity posted a video appealing for donations for an infirmary in Gaziantep, at the Syrian border. An Imkander representative says in the video the building used to be their office but was converted to an infirmary after “too many wounded mujahedeen came.”

In her modest flat in a middle-class Ankara neighborhood, Leyla Eser Onlu says her slain husband loathed to see Chechens “used as pawns” in international conflicts. She describes him as a staunch Chechen nationalist, who was vocally critical of Moscow and averse to pro-Russian Chechens, as well as a devout Muslim who disavowed radical Islam.

Up until his assassination on May 22, 2013, Onlu bore the unofficial title “honorary consul of the Chechen Republic of Ichkeria,” a legacy of the region’s brief de facto independence before Russia crushed the breakaway nationalists and radical Islam permeated Chechen ranks. Leyla describes a man devoted to helping Chechen refugees — tirelessly and indiscriminately. He took care of their accommodation and health care, often straining his financial means, and struggled for their asylum rights. “He was close to people in the current government,” she told Al-Monitor. “Yet, no one stood by us after the murder.”

Though Turkey tolerates the Chechen refugees, many lack residence permits and live in destitute conditions under a constant risk of deportation, activists say. This life in limbo led many Chechens to acquiesce to blackmail-like pressures to join the Syrian war, according to Abrek Onlu, the slain activist’s nephew and member of the Justice for Medet Committee, an advocacy group created by members of Turkey’s ethnic Caucasian community.

“Not all Chechens volunteered to go to Syria. Some went there unwillingly. They were presented with two options: to go to Syria or face deportation … Individuals who were personally the subject [of such pressure] recount confidentially how certain people would come to convey them this message,” Abrek Onlu told Al-Monitor, reluctant to give further details.

Another committee member claimed Islamic civic groups in Turkey were active in the recruitment of fighters. “Some Islamic nongovernmental groups became closely involved in dispatching fighters to Syria. … Those groups are known to have exerted influence on Chechens living both in and outside [refugee] camps to join the war,” Kuban Kural told an online journal.

Lawyer Dogan says they have not dismissed the possibility of a Russian retribution or an intra-Chechen feud, but the suspects’ profile and the timing of the hit make the Syria theory “the most tangible” one. “The Syria issue was where the tensions were the highest,” he said.

The Onlu family is incensed over a “chain of failures” in the probe. According to the official police report, the investigators — using security cameras, phone records and Onlu’s diary — quickly determined the identities of the prime suspects: a Turkish gunman with a criminal record, his Turkish accomplice and an ethnic Chechen instigator of Russian nationality, who frequently spent time and served a jail stint in Turkey. Using false identities, the suspects established contact with Onlu and visited him at his office. Though police had ample clues in the first 24 hours after the murder, all suspects were able to escape, including the instigator, Rizvan Ezbulatov, who slipped out of Turkey, Dogan said. The Istanbul police were not involved in the probe until last summer, though the gunman, Murat Aluc, and his chief accomplice were from Istanbul and the Onlu family received tips from people who spotted them there, he added.

Aluc was finally captured in October in a town not far from Istanbul. Several men, possessing weapons and tools, helped him hide but were let go after questioning. Aluc confessed Ezbulatov contracted him to kill Onlu in what he described as a money feud, but according to Dogan, Aluc’s testimony is incoherent and dubious.

“Not even the craziest of Chechens would dare to kill someone of this profile in the heart of Ankara without the Turkish state making the way for it or looking the other way,” Abrek Onlu insisted.

Yet, analysts say other possibilities cannot be easily dismissed. Kerim Has, a researcher on Russia and the Caucasus at Ankara’s International Strategic Research Institution, noted that the Chechen cause of independence was virtually dead, with the population now largely acquiesced to Russian rule and armed groups “using terrorism to sustain a lost war.” And because of their warrior traditions “Chechens are, so to speak, tailor-made [for use] by international terror groups and various intelligence services,” Has told Al-Monitor. “I think one should not discard the possibility that the perpetrators of the murders in Turkey were Chechens working with Russian intelligence or other groups and organizations.”